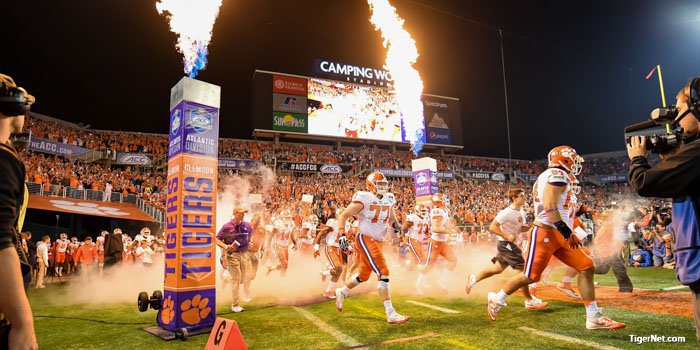 Bud Foster and Brent Venables won’t go head-to-head in tonight’s primetime matchup between No. 2 Clemson and No. 12 Virginia, but both defensive coordinators will get plenty of air time. Foster, however, is more concerned with Clemson's offense.

Venables is in his sixth season as Clemson’s defensive coordinator, and the two have kept touch over the years.

“Yeah, he and I have talked over the years. We first met years ago at one of the Broyles events (assistant coach of the year event), the Broyles Awards and from that point on we kind of established a relationship ever since he’s been at Clemson,” Foster said this week. “We talk randomly and share ideas, pick each other's brains if we’re playing a crossover opponent. I wish he would share some ideas right now but a dynamic football coach. I really don’t know why he’s not a head football coach right now himself. I mean his track record and what he’s done at Oklahoma and what he’s done and built at Clemson is just – what they do is really outstanding.

“Obviously, he won the Broyles Award last year and deservedly so. I personally think that he’s the best defensive guy in the business right now. They do a lot of different things but they’re fundamentally sound, they create a lot of havoc and we study them a lot in the offseason, but really a dynamic football coach and an outstanding guy.”

Foster will have his hands full with a Clemson offense that is ranked 13th nationally in rushing offense at 272 yards per game.

“Well, I think the ability for them to kind of have a lot of heads running the ball, meaning you’ve got tailbacks that are dynamic and then the quarterback. In our game last year, really where they wanted to control the ball was run the quarterback,” Foster said. “What happens nowadays in today’s game running the quarterback you can get a hat on a hat and get a guy that’s coming off a block have to make a play, and obviously defensively what you’re always trying to do is have one more defender than a blocker, so you hopefully have a free hitter that needs to make a play.

“That’s the one thing that we’re working really hard is we’re trying to see where we can make sure we get that proper fit. Because they’re like our offense in a lot of ways. They’ll see what you’re giving them and then they’ll try and attack it the other way. With quarterback counters, quarterback powers, speed options, they’ll do a lot of different looks and I think that’s one thing that’s a little bit different is that maybe I’m seeing them running the quarterback- not that they didn’t do it last year some. They always have, Clemson, going back to our days playing them in the ACC Championships in the late 2000s with Tajh (Boyd). When it was a big game, they ran the quarterback and that’s the one thing that you see that they’ve done thus far and that’s the one thing that we’re going to have to figure out how we can get that extra hat to the football.”

Foster was asked to compare Clemson quarterback Kelly Bryant to Deshaun Watson, and he said that Bryant has many of the same qualities.

“What you see in similarities is dynamic athletes. I’m not going to put this guy in the same category as Deshaun who I thought really was the best college football player in the country last year,” Foster said. “I do believe this guy has a lot of the same qualities are far as good arm strength, he makes good throws down the field, he seems to make good decisions with the ball in his hands, he’s dynamic and explosive. Those are some similarities. Now, does he have the same experience? No, and he’s gaining that and obviously, he’s stepped up in these games early in the season. I’ve been very very impressed with him and how his athletic ability and his skill set to throw the football and with the ball in his hand he’s dangerous and we’ve got to do a great job against him this week.”

The Hokies also have to prepare for freshman running back Travis Etienne, who leads Clemson in rushing.

“You’re seeing his role improve each and every week. He’s averaging a little over 12 yards a carry every time he touches the ball so very explosive and a big play threat every time he touches the football and it’s scary,” Foster said. “That’s the one thing, like I said where I think they’re so much better is they’re so much more physical up front which allows those guys on the back end to create a little bit of crease and all those guys are big kids, he’s a big kid who can run through tackles and besides, once he runs into the secondary then he has the ability with the speed to take it to the house. That’s concerning obviously, but I think a very dynamic explosive guy who runs behind his pads and has some strength who I think is a really talented young player for them.”