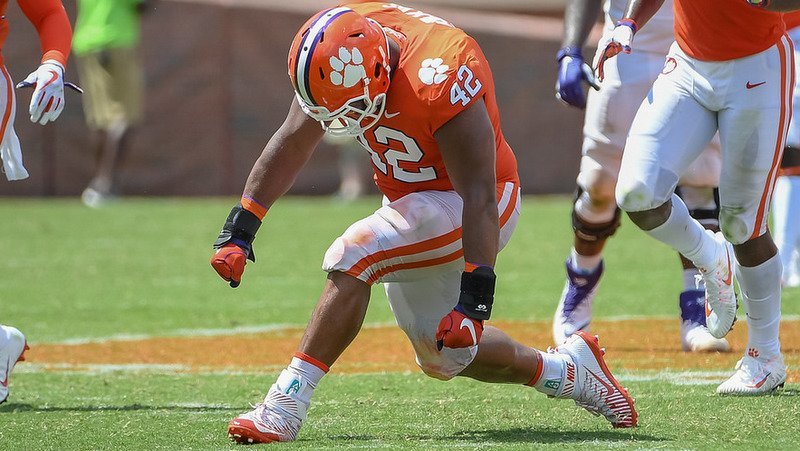 CLEMSON – During one of the most difficult weeks in recent program history, it was the players stepping to the plate and showing the leadership and mental fortitude found in championship caliber teams.

The coaches did plenty of talking and leading, but it was people like Christian Wilkins who spoke up during the most critical of times.

When former quarterback Kelly Bryant announced his intent transfer last week, many wondered how Clemson’s locker room would respond, but Wilkins said he was never worried.

“I wasn’t worried at all. It was a tough situation. We didn’t worry. At the end of the day, everyone has a job to do. We are professionals. A lot is going on, everyone just has to step up in every area. Leaders are going to have to step up,” Wilkins said Tuesday afternoon. “It starts with the leadership and the guys that have been around. We have a lot of seniors and guys who aren’t afraid to lead. The guys just did a really good job and showed their true leadership and everyone’s willingness to follow. Just glad we were able to get through it.”

Wilkins is known as a leader on defense, but he took it upon himself to take freshman – and new starting quarterback – Trevor Lawrence to breakfast last week to let him know that he and the team had his back.

“It wasn’t a big deal I was just looking out for Trevor. I went on a date with a nice cute blonde,” Wilkins said with a coy smile. “That’s all, we just hung out. Sometimes I just talk to him. We were just hanging out and enjoying the meal, I would do that for anyone on the team. I would do that for anyone who has a lot of their plate period. I just want to show all my teammates that I got their backs no matter what.”

After everything that happened during the week, Clemson found itself trailing in the fourth quarter to Syracuse and without Lawrence. However, Wilkins said the defense never shied away from the challenge.

And, Chase Brice – a redshirt freshman – was, well, Chase Breezy in the most critical of moments leading Clemson on a 94-yard game-winning drive.

“We knew we would have to do our part. No one would have to go out there and be Superman,” Wilkins said. “I felt like the offense would figure it out. The offensive line really stepped up. All the guys did their jobs. No one really flinched. Chase Breezy is just a cool customer and did his things. He earned some more respect from me for sure.”

While Wilkins is thrilled with the job Brice did in crunch time, he wants his chance to be third or fourth-string quarterback.

“No, I have not. That is the most thing I’m upset with about the quarterback situation. I know Hunter will get his chance before me,” he said. “I don’t know what’s funny. I don’t find anything funny. I can run, and I can sling the ball a little bit. I feel like I feel I should at least be three or four on the depth chart. It is what it is.”