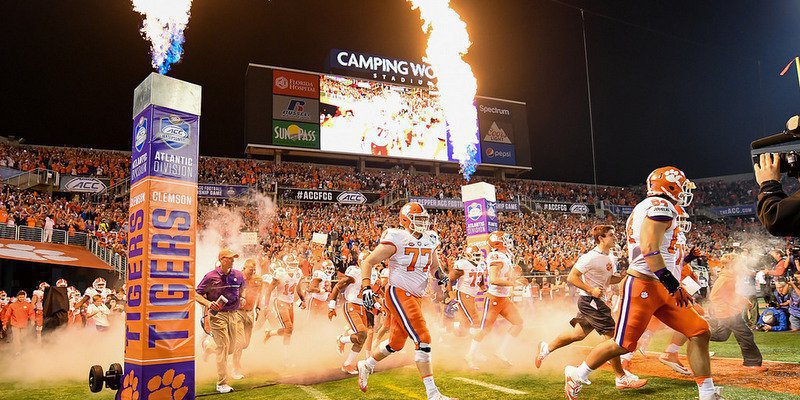 Just sit right back and you’ll hear a tale, a tale of a fateful trip.

Yes, that is the opening line to the Gilligan’s Island theme song, and I think it’s appropriate here. Why? Because I acted like Gilligan and had to get a wizened skipper to get me out of trouble while my Mary Ann did everything she could to help me overcome my mental lapse.

Call this the first chapter of “Tales from the Road with Clemson Football.”

Let’s start in the press box at Camping World Stadium in early December. A few hours earlier, Clemson had knocked off Virginia Tech to win the ACC Football Championship, and those of us left in the box were finishing transcribing quotes and writing stories.

For Nikki and myself, we knew it was going to be a long night. We flew to Orlando for the game because we knew if Clemson won, they would be invited to the College Football Playoff and we would have interviews around noon on Sunday in Clemson. Yes – we had to leave the press box, go back to the hotel to grab our luggage, drive to the Orlando airport, drop off a rental car, get to our gate, fly to Atlanta, drive to Powdersville, unload our stuff and sleep an hour or so and drive the 40 minutes back to Clemson for interviews. All in the space of 10 hours of so.

We packed our laptop bags in the press box, said our goodbyes to people we knew and I reached into my pocket for the keys to the rental car. Except, in that moment, I realized that reaching for the keys was futile. They weren’t there, because I lost them, and I knew exactly where.

Nikki looked at me with a look of incredulity and pity, not sure if I was pulling her leg or not at two in the morning and a flight to board in the next three hours or so. Once I told her the story, she didn’t smack me around or berate me – she simply helped me head back to the field to find the keys.

Here’s what happened: Once the teams arrived in the stadium, I went down to the field to take photos and see if there happened to be any last-second intel I could glean. I was walking along the Clemson sideline, saw a football with a paw on it, and decided to have an impromptu photo shoot. Except the ball wouldn’t stay put, and it kept rolling forward and covering the paw. I grabbed the car keys out of my pocket (you see where this is going, don’t you), set the keys behind the ball and placed it on an equipment trunk.

A few seconds later, someone on Clemson’s staff called me over to take a picture with a family member, and I happily traipsed away, leaving the football (and the keys) behind. And with everything that goes on at a football game, I didn’t give them a second thought until we were ready to leave the box.

By the time we reached the field, the main lights were off and there was merely a soft glow remaining. We went to the spot where the equipment trunk stood when I last saw it and started sifting through the confetti (for the record, Nikki has a ton of confetti) to see if we saw them. We turned on the flashlights on our phones, and looked for maybe 20 minutes with no luck.

We elected to head to the rental car, call the rental company or AAA and see if we could get a locksmith to the car in time for us to catch a flight. Heading out of the stadium, we noticed that all of the gates were now locked except for a small one, and as I tried to fit my large frame between the posts I caught the meaty part of my arm on a piece of the fence and opened a gash. I didn’t say anything to Nikki, but when we got to the car she noticed I was dripping blood off all of my fingers and I am sure was wondering about a good divorce attorney.

The clock continued to tick as we made calls – the rental car company was closed (the office in Orlando) until 8 a.m., and AAA was promising they could tow the car if we wanted to grab a cab and head back to the hotel and the airport. Someone from the national office of the rental car company called us and told us that for $272 someone would come out to us with an extra set of keys – by 10 a.m.

With nine hours to go until we needed to be back at the WestZone – blood still flowing from the gash in my arm – Nikki had an idea. She called Jim Phillips, Clemson head coach Dabo Swinney’s high school coach who is a mainstay around the program. The hope was that he might have seen the keys while he was on the sideline. A few minutes later, he called back (the team was already back on campus and we were still in the parking lot in Orlando) and told us he did see a set of keys.

Someone found them sitting on the equipment trunk, kept them in their pocket during the game, and placed them on a Gatorade cooler in the coach’s offices inside the stadium. Leaving me to bleed, Nikki snuck back into the stadium, wandered around the empty locker rooms and offices until she found the right one and found the keys.

She rushed back out to the car, we sped back to the hotel, showered, bandaged my arm and made it to the airport and our gate with six minutes to spare.

The keys to victory? They were sitting on a Gatorade cooler in the stadium.