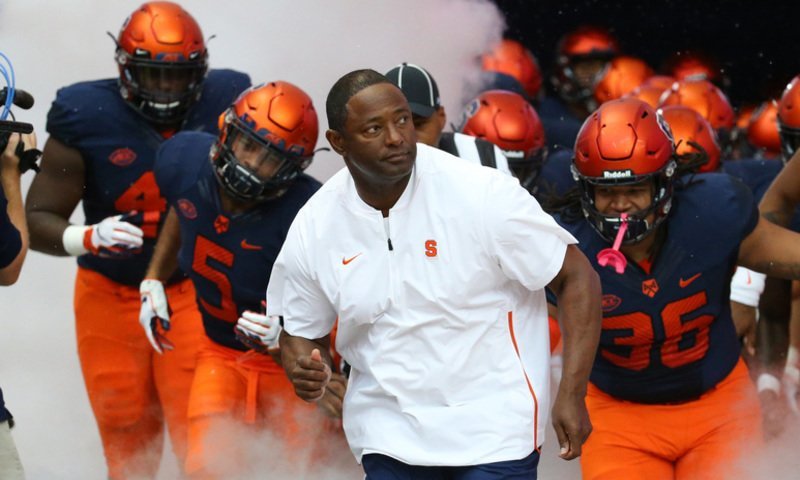 Babers says Clemson's Death Valley has the edge among facilities that go by that moniker in noise.

Each season under Dino Babers has brought a win over a ‘name’ program while he has worked on building up the Syracuse football program.

Babers has guided the Orange to a 4-0 start for the first time since 1991 going into Saturday’s trip to Memorial Stadium (noon, ABC), with a home win over Florida State in that mix in addition to upsets of Virginia Tech (2016) and Clemson (2017) in recent seasons.

Babers, who is in his seventh year as a head coach overall and a third with at the ACC program, has done a 180 of sorts in the weight wins like those carry publicly.

"You can bring them and say, 'Forget about that. Now we need to move on to the next game,’” Babers told ESPN Radio after the 27-24 upset last October. “But in my heart, I just feel this is too big. You've got to let this wave ride out. I was born in Hawaii. You've got to ride this wave.”

Syracuse, suffering a rash of injuries along the way, went on to finish the 2017 campaign with five-straight losses and missed out on the postseason at 4-8.

His comments Monday on the same subject more closely resembled his opposite number this week, in Clemson's Dabo Swinney.

“It's just one game you know,” Babers said. “Whether you win or lose it only counts as one game and our whole deal is that we just want to win this week and it doesn't matter whether it's Clemson or Wagner or Western Michigan or Florida State we're trying to win this week. I'm sure they're trying to do the same.

“If you make it more than that you start to get ahead of yourself and that's where you get in trouble. We've got a football game this Saturday. We're playing the Clemson Tigers. It'll be interesting. We'll get down there and we'll give it our best shot.”

Babers is wary of the Clemson environment after his first experience was a 54-0 loss in 2016. He said, after experiencing both trips over the 2016-17 seasons, that Clemson’s Death Valley was “a little bit louder” than the stadium termed the same by LSU fans in Baton Rouge, Louisiana.

“Two years ago when we went down there (Clemson), we had a lot of difficulties. Couldn't hear,” Babers said. “It's gonna be extremely loud, but you know what, that’s how it's supposed to be in a big game when you're going in somebody else's place.”

Babers is looking for his team to stay in tune mentally - taking a more veteran-laden group on the road than 2016. He knows that his team is up against it as big underdogs again (24 points).

“They've won one and we won one (in the series with Babers there),” he said. “Everybody's held serve on their home field. The big thing is trying to find a way to win on somebody else's field. It's going to be difficult. You know they're an extremely talented team. Their entire front four is going to get drafted. Never seen a front four like that before and we played them last year and we're going to play them again so they're really, really good.

“It's gonna take an almost spotless game on our part, but we're looking forward to the chance to go down there and play.”