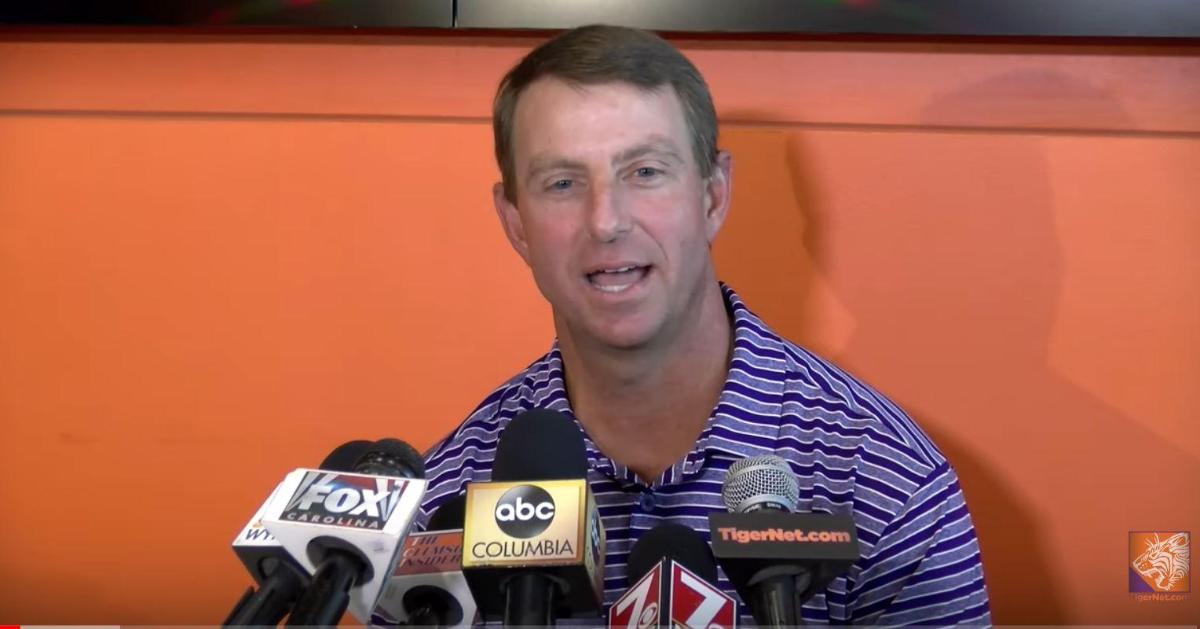 Swinney speaks with the media Tuesday

CLEMSON – Last season’s national championship team was like a new Tesla, self-driven with a bump here and there from head coach Dabo Swinney. This year’s team is a little younger, and Swinney will have his hands firmly on the wheel.

Swinney held his annual media outing Tuesday at the Reeves football complex and said he knows everybody is ready for football to get started.

“I know all of Clemson Nation is ready to get everybody back on the field. Our players are ready to get back to work on the field. Everybody has been grinding since January,” Swinney said. “There is always a little misconception that we are beginning right now. We aren't beginning right now, we are starting the third phase of our journey. We break our year down into four phases, and this is our third phase. We get ready and transform and then we head into primetime. There has been a lot of work going on, but this is the fun part because we get a chance to get back out on the field and start playing some games. Everybody has a visual in their mind of that team last year because we haven't played a game.

“But this is a different team and we are ready to turn the page. Until you play a game it's hard to do that, but August 29th will be here before you know it. We have a lot of work to do with this team. A lot of work. We are a true work in progress but it's been a good summer. The leadership and accountability have been excellent. Injury-wise, we are in a good spot. Nyles (Pinckney) has had a great summer. Jordan (Williams) has had a great summer and those guys are eager to get back out on the field. They have been leaders off the field and now they are ready to go be leaders on the field.”

Swinney said his team is good enough to compete for a league title.

The 2019 Tigers are younger across the board, meaning the car will have to have a little more direction from the coaches.

“You have to keep your hand on the wheel a little more. It's different,” Swinney said. “If you look at our roster we have 120 on the roster and 80 of those are freshmen and sophomores and 40 of them are juniors and seniors. You have to train differently in the summer because there is a lot to teach. It's our job to meet them where they are - it's not their job to come to us. We have to meet them where they are in their developmental process as a person and a player. When you have a team like this it has to be a little more coach-led in certain cases. That team last year, I just kind of bumped there here and there to keep them on target. They were unbelievable leaders and had complete control of our program. These guys are young, but they were here last year and they have an idea of what it looks like. Now those guys have to go do it.”