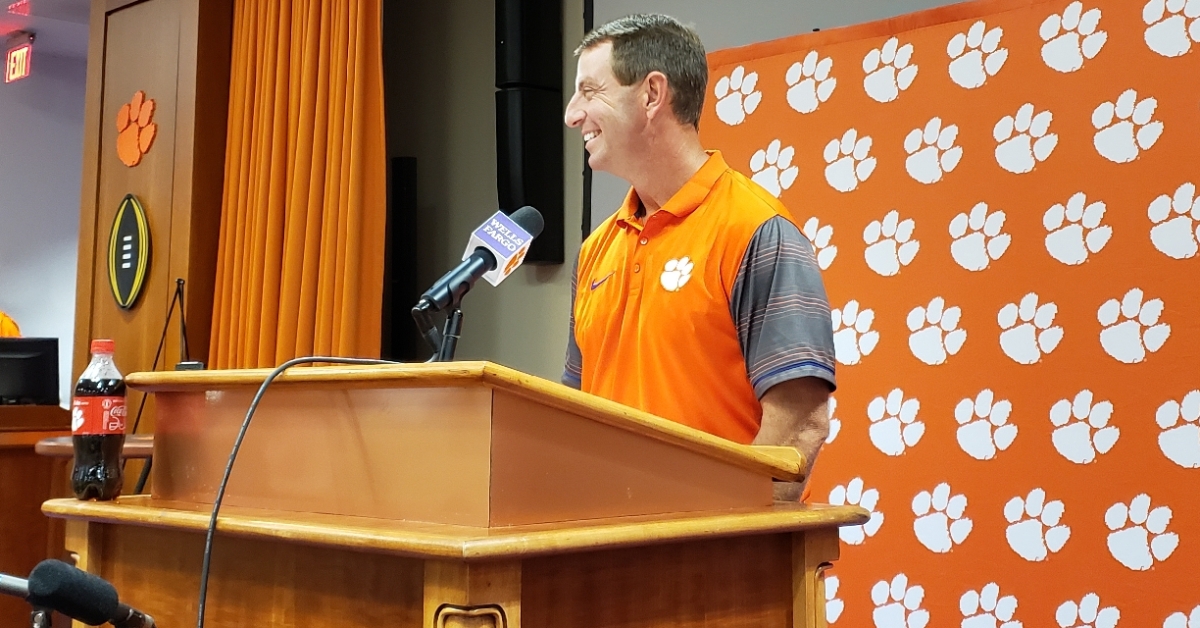 CLEMSON – Texas A&M and Clemson played an early-season thriller in College Station last season, and both teams improved after the Tigers’ 28-26 win. Dabo Swinney is looking for more of the same after the teams collide this week.

The teams meet at 3:30 pm on Saturday in Death Valley (ABC).

“This is a huge challenge. I'm very impressed with Texas A&M,” head coach Dabo Swinney said during his Tuesday press conference. “I know we've only got one game in the season but really impressed with them. We've had a chance to really study them this summer and look at their season from a totality standpoint last year. They got better and better and better.”

Quarterback Kellen Mond is the main cog in the Aggie offense.

“I know they have some new people just like we do but they have some key ingredients back starting with that quarterback,” Swinney said. “He is a really good football player, a big-time player. He's bigger, faster, stronger, smarter, more confident than he was last year so that's the biggest thing that I see in watching him. He's made some big-time throws on the move. That's where he really just kills you because he's got the ability to sit in the pocket and make all of the throws.

“He's accurate but then he gets to scrambling and gets outside the pocket and if you don't do a great job with your contain or rush lanes and next thing you know he's put the ball downfield on the move. We saw that up close. These guys threw the ball all over us last year in the fourth quarter. The last three minutes of the third quarter and the fourth quarter, we couldn't stop them. We busted. He made some great throws. We had some opportunities - got hands on balls and didn't finish. It was a long night.”

The Aggies piled up over 500 yards of total offense last season, mostly through the air.

“They weren't able to run the ball on us last year. Our d-line set the tone in the run game but we grew a lot from that game and we got better as the year went for sure,” Swinney said. “Hopefully, our experience in the back end this year will show up a little bit better and we can be a little bit better positioned and make some of those competitive plays. They'll get off the bus throwing the football down the field, big time.

“They're going to run the ball, play action, screen game, boots and nakeds. That's what Jimbo has always done and he's got good people to do it with. Impressed with the running back. They're outstanding at receiver - as good as we'll play. They're big and strong and physical up front. We know exactly what we're getting into with this bunch but we're going to have to do a great job with this quarterback because it all starts with him.”

“The flipside of it defensively -- we've been going against Elko for quite a while since he was at Wake Forest and he's as good as there is out there in the country. He does a great job with their scheme. Those guys are schooled up,” Swinney said. “They mix their coverages, the mix their techniques. They'll get up and challenge you and then they'll play a lot of catch technique off with eyes and do a good job of route reading. We've got to be really sharp and technically sound early in the season to have a chance to be successful against these guys.

“They're big up front - 52 (Justin Madbuike) and 5 (Bobby Brown) are mountain of men. Their two ends - their No. 3 (will remind you of our No. 3. He's fast and electric coming off the edge. Good at backer. He's a coast to coast guy coming off the field. Their corners are all 6-2, 6-3, 6-4. Long bodies at corner. They're a really talented group across the front on both sides. It's going be a big challenge for us.”

Swinney said both teams will be better for playing this game.

“I'm excited to see how our team is going to respond to a group like this. Early in the season, I think this is great for us. They're definitely one of the best teams in the country,” he said. “Regardless of what happens in this game, I think that's going to play out and the same thing for us. It's a great opportunity early for us to grow our team and win or lose the game, we're going to get better from this game. I love the challenge. I love the opportunity to go against a great team early in the year before we get into conference play and kind of see where we are and grow up a little bit. I thought it helped us last year. We were fortunate to win the game but that game helped us to get better and to make a run. I don't have any different feelings about this group this time around.

“We're excited about having them here at home. It's going to be an awesome crowd. We're praying for everyone in the path of this hurricane and hoping that it will turn and the folks up here in the Carolinas it has minimal impact on them.”