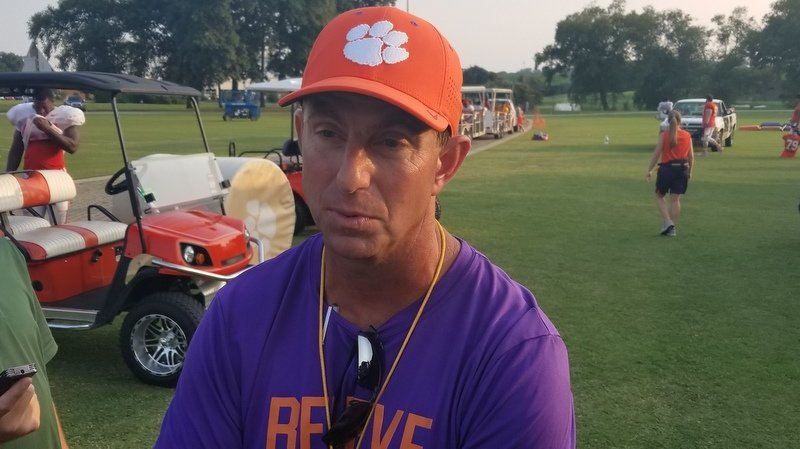 Swinney met with the media Monday

CLEMSON – Expect Clemson’s quarterback battle to last into the season.

Head coach Dabo Swinney met with the media after Monday’s practice on Jervey Meadows, and reiterated what we’ve thought all along – he anticipates the quarterback battle lasting into the season. He even threw out the possibility that wide receiver Hunter Renfrow might play under center or in the shotgun.

We think he was joking.

“Again, we’re going to keep evaluating every single rep every single day. When it’s time to say, ‘Hey this is where we are,’ we’ll make that statement. Kelly (Bryant) has had a few really, really good days,” Swinney said. “I’m really proud of him. He’s accepted the challenge and he’s approved drastically. He had a great scrimmage. Trevor (Lawrence) continues to get better. Chase (Brice) continues to get better. They’re still freshmen and they still make mistakes. I’m excited about what I’m seeing.

“The one thing I can definitely say is regardless of how it plays out, I don’t see a situation early where we’ll just play one guy. You’re going to have some guys who deserve to play. This is a situation that if somebody separates, it will probably take place in the games because you’re talking about incredible competitors that are up to the task. I’m really proud of how they’re competing and we’ll keep grinding it out.”

Swinney even threw out the possibility of four quarterbacks – or more – playing quarterback.

How has Kelly Bryant improved?

"Just the speed of the game. It has slowed down for him. If you go back to this time last year, he hasn’t played much. He had 100 snaps or less in two years and he hadn’t played much quarterback since high school, so this was a big task for him last year. His confidence, it’s night and day from where it was this time last year. Not that he lacked it, but you don’t know what you don’t know. We all get better from experience. His confidence is tremendously higher but the game is slower for him, so as a result, he’s playing faster. He’s processing things faster, being very consistent with his decision making. He’s thrown the ball extremely well down the field. He’s been very accurate on the intermediate throws. Just really all of it. His leadership has been much more assertive than this time last year. It just kind of comes with the territory. He just goes about his business and is focused on what he’s doing. He knows that every rep that he takes is being graded at a high level just like all of these other guys. Somebody wins the day every day. We’re keeping a tally and if it’s a tie, we write a tie. It’s a battle all the way through. Every practice counts, every drill counts, every period counts and those guys have embraced that. I’m really pleased with what I’ve seen from all of them."

Is Trevor Lawrence comfortable with the read-option and RPOs?

"He did everything in high school from the ninth grade on. There’s not much that we do that he hasn’t done. I think the biggest thing is the protections. There’s a lot more that we ask of these guys protection wise because we see a lot more, espeically going against our defense and trying to survive. You better understand the protections. We give the quarterbacks a lot of flexibility. It’s very natural for him, the ballhandling, first level, second level, third level reads from a run-pass game. All of that has been pretty easy from him."