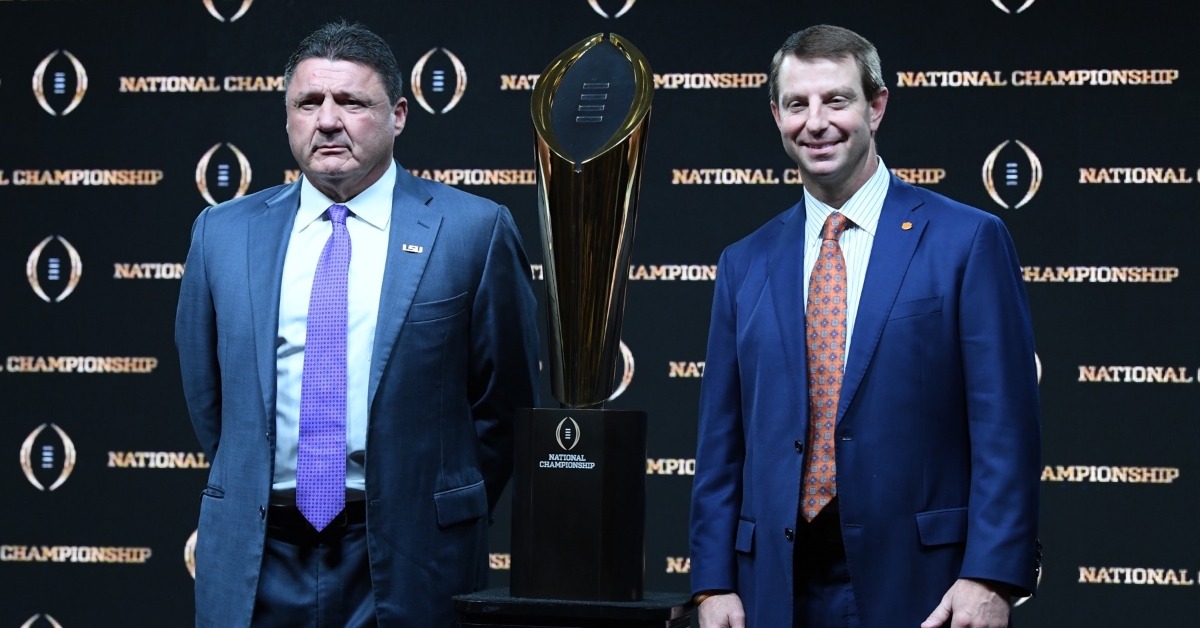 Orgeron and Swinney pose with the National Championship trophy Sunday

NEW ORLEANS, LA – Clemson will play its first game of the new decade Monday night in New Orleans, the first step in what head coach Dabo Swinney hopes is the Roaring ‘20s.

Swinney and LSU head coach Ed Orgeron held their last press conference before Monday’s National Championship Sunday, and Swinney was asked how he would describe the previous decade, the best decade in Clemson football history.

The Tigers have a shot at several records if they win Monday’s game, and Swinney said he doesn’t have to remind his team of what’s at stake.

“Certainly we reinforce from time to time what their opportunity is, but it's not like we're giving them anything they don't know. They know. They're very well aware of what they've been able to achieve. And listen, regardless of what happens in the game tomorrow night, it's really been a historic run. To win two out of the last three National Championships is amazing. I'm just super proud of all of our teams that have worked so hard to just be the best they can be, and that's really our goal. That's it. Sometimes you get beat, and our goal is to be the best we can be every single year.”

Swinney said he wants his team to be great in the moment.

“Winning a National Championship is a byproduct of that commitment,” Swinney said. “So just thankful for all of our teams, and they're well aware of all the opportunity and all that stuff, but that's really not the focus. I think when you focus on that, you're focusing on the magnitude of the moment and you lose the joy of the moment. That's all we try to focus on is just being great where our feet are and just have some fun doing what we do to get ready.”

He then said he is looking forward to a great game Monday.

“I’m just appreciative of all the hard work that's gone into making this a great experience for our players, and New Orleans has been great,” Swinney said. “Looking forward to an awesome game tomorrow. Really amazing season that LSU has had. Coach O and the job that he's done, his staff, just incredible.

“This is the way it should be. Two great, great teams that have worked extremely hard to get to this point, and to be able to have it culminate tomorrow night in front of the whole country and probably a lot of people across the world, to watch a great college football game, it's just an awesome thing, a blessing to be a part of.”

Orgeron said his team isn’t focused on the championship.

“We didn't talk about going to play for the National Championship. We talked about we have to prepare to beat Clemson, one game at a time, just like we've done,” Orgeron said. “We have trusted the process. Today is focus Friday. The guys are getting excited. They are getting antsy. I can feel it. I'm getting antsy, too. But I think we have to continue to work up through game time. They are going to make plays. We're going to make plays. We have to work for 60 minutes and focus on winning the game and not worry about all the other stuff, block out all the noise just like we did all year.”

“Yeah, we might have had the best practice we had all year. We had the same opportunity to go to the palatial Saints facility,” Swinney said. “It's just crazy how people put these narratives out there right away. We had the same exact opportunity to go there, but we were going to have to change our schedule and just didn't want to do that, and obviously the weather was nasty, so it was great. I mean, it's massive, and this was – it was a Thursday practice for us, and our Thursday practices are kind of jog-through anyway, and this was practice nine, day 10 in a row that we've been together, so it was even lighter than that, it was a lot of fun, it was great energy.

“I mean, listen, both these teams are ready to play. You can only practice so much. It was a great practice. It was a great day. Thankful that we had a really good facility, and again, we could have done the exact same thing. I just chose not to change our schedule up and stay on course, and it's great.”