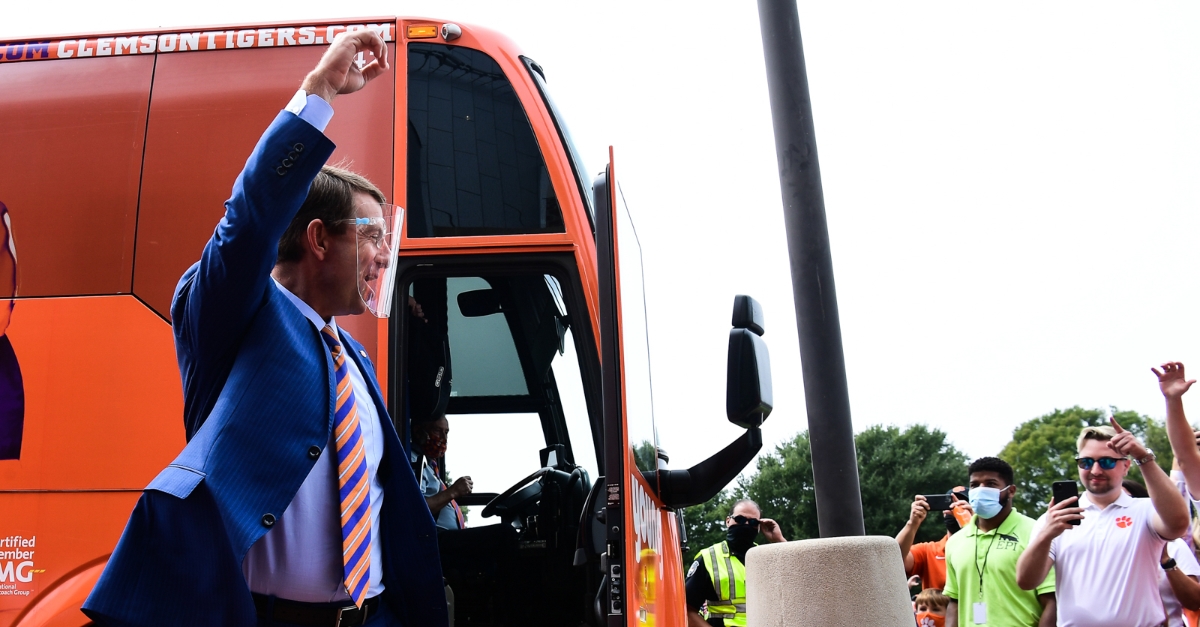 Swinney smiles at fans before the game against The Citadel (Photo per the ACC).

It’s a night game in Death Valley, and while head coach Dabo Swinney is excited about playing under the lights, he’s also thankful for just having the opportunity to play.

Swinney is excited about the primetime matchup.

“It’s going to be awesome. It sounds like we are going to have a few of those night games along the way. But I am just excited to have any game, regardless of what time,” Swinney said. “They could tell us we had to play at ten o’clock in the morning and I would be just as excited. It will be a great atmosphere. Whatever juice our fans can bring, I know it will be in the stands. It will be fun to look forward to it. We have had one night game already at Wake but there wasn’t anybody there. But in this world we are operating in it will be as fun as you can ask.”

Swinney said his team is in a good spot coming out of the open date.

“We're excited to be back in the game this week enjoyed the open date," Swinney said. "Got a chance to watch a lot of other people play and kind of learn a little bit about some other teams and learn from other teams as well so enjoyed that. But, you know, nothing like being a part of it every week. Just knowing that you've got a game to look forward to and the preparation that takes place all week long. To me, that's what it's all about.

"Our guys are in a good place, you know, we've got good momentum, obviously had a good start. Now we're turning the page and stepping into October here, another opportunity here at home, will be a night game in the valley."

Swinney said he was impressed with Virginia’s win over Duke.

"You know this weekend, got a really good Virginia team," Swinney said. "They got a lot of guys back offensively. We saw (quarterback Brennan) Armstrong some last year but not a ton. So, got the chance to see him this past Saturday was really good, other than... he's a challenge. He's a problem, he's a really good player. Looks like a, you know, a young Steve Young running around out there and left the craft the creative extends plays tough runner. Really good size, accurate thrower really has no fear, this ball up trust his guys to make competitive plays for him.

"They do a great job from, from a schematic standpoint, experienced in the offensive line, know what they're doing with their formation... Check-with-me, RPOs, their efficiency on first and second down, you know they do a great job with all that stuff, got a few transfers in there. 21 is, he's a big boy pad runner, you better be ready for that guy. Bronco (Mendenhall) has done an amazing job obviously this is a rematch of the ACC championship game last year, and they were there for a reason. This is a team that, you know, and culture and a program that's been building.”