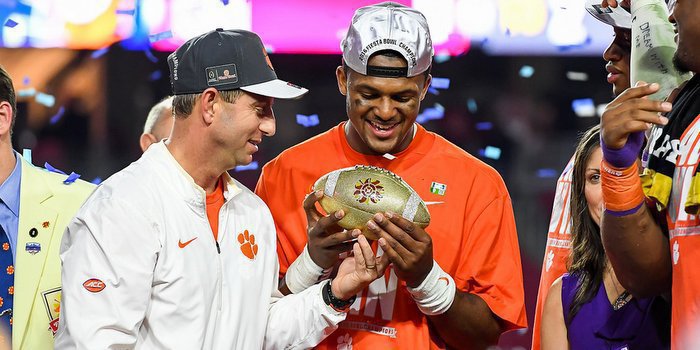 Watson and Swinney celebrate the win over Ohio St.

GREENVILLE – Deshaun Watson faced the NFL Draft with calm and poise. Raise your hand if you’ve heard that said about him before.

Watson, the former Clemson quarterback who was taken with the 12th overall pick in the first round of the draft by the Houston Texans, watched two quarterbacks with lesser resumes come off the board before his name was called.

Clemson head coach Dabo Swinney, sitting at the table with Watson, watched his former star as UNC’s Mitch Trubisky was claimed by the Chicago Bears with the second overall pick and Texas Tech’s Pat Mahomes was drafted with the 10th overall pick by the Kansas City Chiefs.

“He just had this total peace,” Swinney said Wednesday at the Greenville Clemson Club Prowl & Growl event at Fluor Field. “Other people had a lot of anxiety. I’m sitting there going, what the heck. I’d be going crazy.”

Watson showed that same poise and resolve while directing Clemson’s comeback win over Alabama in the National Championship game in January, but noted there was a difference in what Watson faced in the draft.

“The interesting thing was this was the first time in his life that he had zero control over the situation,” Swinney said. “So that was a little different for him, but in typical Deshaun fashion, he showed such grace and poise and humility in every situation.

“To watch him in that situation, he had total faith that God was going to take him and put him right where he was supposed to be.”

Watson told Swinney before the draft that Houston would be a perfect landing spot.

“He didn’t think it was going to happen because they were at (number) 25. He didn’t know how it was all going to play out. There were a lot of unknowns. But as he said, he went right where he was supposed to go, and it could not have worked out more perfect.

Swinney smiled when he said that Texans head coach Bill O’Brien and the rest of the Houston franchise have no idea what they have on their hands.

“They don’t know it yet. That’s the best part,” Swinney said. “They know they’ve got a good player. Obviously they like him a lot — they went from 25 to 12 to take him. But they don’t really know what they’ve got as far as who he is, the stuff that you don’t see. So, I’m excited. I’m happy for him. He’s thrilled.”