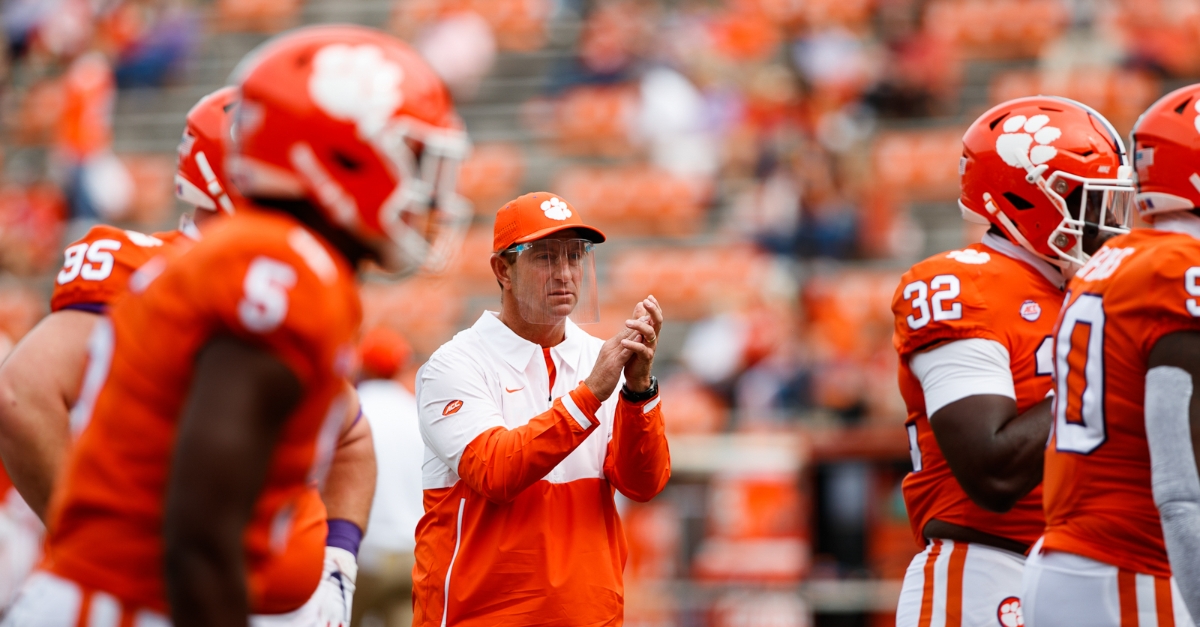 A few weeks ago, Clemson head coach Dabo Swinney looked ahead to the Tigers’ late September open date and thought that it came too early in the season. Now, he thinks it’s coming at the perfect time.

No. 1 Clemson defeated ACC foe Wake Forest 37-13 on the road and dismantled The Citadel 49-0 at home for a 2-0 start to the season. The Tigers are firing on all cylinders but won’t take the field again until an Oct. 3rd home date with Virginia (8 p.m., ACCN).

However, the students have returned to campus in force, in-person learning started this week and the Tigers have more than a few bumps and bruises.

"God's plans are aways better than mine because I wouldn't have planned that way," Swinney said last week. "I personally don't usually like playing two games then having an open date because of momentum. But now I love having an open date because the timing of the students coming back on campus and we have a couple of guys banged up. There's a chance for them to come back when we get back going in October."

Defensive tackle Tyler Davis left the Wake Forest game (lower leg injury) and didn’t play last weekend. Swinney said Monday evening that he hopes Davis will be back for the Virginia game, along with offensive lineman Mason Trotter. Wide receivers Brannon Spector and Joseph Ngata left the game with injuries Saturday, and defensive ends Justin Foster and Xavier Thomas have yet to play this season.

Foster is expected back for Virginia, while Thomas will take a little longer. Defensive tackle Ruke Orhorhoro has to have surgery and will be out until at least December.

Virginia had an early game against Virginia Tech moved and hasn’t played this season, but will play Duke this weekend.

"The only difference is we do have a little extra time to get ready for Virginia, so we'll get a chance to see them play. We haven't seen them play yet. I think they play Duke next weekend, so we'll get a chance to see them play a game,” Swinney said. “But we do what we do, really no different. We'll practice on Monday. Tuesday's always been a community-service-type day, but we're not going to be able to do that right now. So we're going to do a bit more team-oriented-type function. We'll practice Wednesday and Thursday. Then we'll get Friday and Saturday off. We'll get back in here Sunday for testing and then it's game week again.”

The Tigers then face a stiff challenge against Miami on October 10th – the Canes defeated UAB in the season opener and then manhandled Louisville last weekend. However, Swinney is only concerned about Virginia, a team Clemson defeated 62-17 in the ACC Championship Game last season.

“The biggest difference is just a bit of time to prepare for Virginia. We won't worry — we won't even think about Miami. We're one (opponent) at a time here — one day at a time, literally,” Swinney said. “But we'll take this extra time and, again, really spend some time developing our depth — correcting, teaching from this tape — and it's a great opportunity to kind of go over some things, slow some things back down, but again, get a head start on Virginia, get a chance to watch them next week. But as far as how we prepare, it's really not any different."