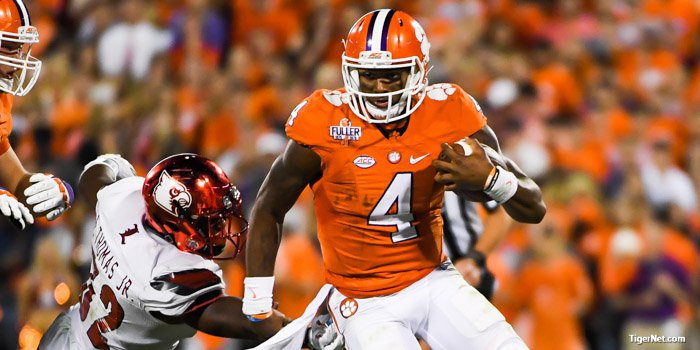 CLEMSON – Saturday’s exhilarating win over third-ranked Louisville had all the elements of a box office hit.

Winners and losers. Heroes and villains. Breathtaking sound effects. Plot twists you didn’t see coming. The visual of a cool, early fall night filled with an explosion of orange and fireworks galore.

It also had a great script, but if Deshaun Watson was writing the script the third quarter would have been a little different. Clemson raced out to a 28-10 halftime lead, fell behind 36-28 late, rallied to take a lead with just over three minutes remaining and then held on for dear life as Louisville made one final push.

Watson appreciated the drama and said it was unlike any game he’s ever been a part of.

“It felt like a movie. It's one of those kind of things that you see on ESPN or in different movies where you're like, 'If this happened it would be pretty cool,' and then when it comes to it, you have so many mixed emotions and ups and downs - different momentum shifts,” Watson said. “It was a cool experience and one of the best games I've been a part of in my whole career playing football.”

If Watson had written the script, however, there would be a few script adjustments, starting with the third quarter.

“It would’ve probably been a little different. Coming out of the third quarter, if I were writing the script, I would have blown the game away (made it into a blowout), but at the end of the day it was a fun game,” Watson said. “Louisville is a great team, and they fought hard to the very end. It was one of those memories - not just for the players, but for the fans and this university will never forget.”

Running back Wayne Gallman said the offense was told by head coach Dabo Swinney to be involved in all parts of the game – not just sit in an offensive huddle – and he was blown away by the atmosphere.

“We pay attention to everything. Really pay attention to the kickoffs and field goals,” Gallman said in the WestZone Monday. “He wants us standing up, staying in tune because we're a team. That’s been a big emphasis with Coach Swinney. And I felt like I was really into the game, anyway, because I was a big part of the offense.”

The movie featured a story of redemption – wide receiver Deon Cain rebounded from a slow start to the season to catch two touchdown passes.

“It was unreal. The fans were crazy out there and the atmosphere was crazy,” Cain said. “It brought a lot of energy to me to go out there and perform on that higher stage. I know for my teammates it was great because everyone was watching and we had to execute and let everyone know that Clemson is still here and will remain on top. It was an unreal experience. Deshaun was right - it was like a movie because of all the ups and downs, but at the end of the day it was fun.”

Offensive lineman Tyrone Crowder said that the soundtrack – the noise and the music – played a part in disrupting Louisville’s offense.

“The crowd was incredible. I don’t know what their snap count was, but you could tell they were having trouble,” Crowder said Monday. “I don’t know if they were going silent or with the quarterback clap or what, but I doubt they were even able to hear the quarterback. That causes problems. It was crazy.”

The plot twist was an ending that saw the Tigers come back and win late, something the Tigers do well in rehearsals.

“We just all had faith and trust in one another, in all three phrases - special teams, defense and offense and everyone had to do their job and do their part,” Watson said. “Louisville had the momentum and they were on the road and they were feeling themselves. They had that confidence in what they were doing and making plays. We had to do our part and we needed plays, players made plays.

“We just had to be great and do what we do. We practice this at least two times a week and so many times in fall camp, moments like this. That's why Coach (Dabo) Swinney's puts us in situations like this during practice because you never know when the time will come when we need it. It was pretty simple for us - go down and do what we do. During the game we scored in 25 seconds twice, so we can score in seven minutes if everyone does their job and executes. That's what we did. We just told each other, 'Hey, let's be great and make this moment special be special,' and that's what we did.”

The movie also had a little heart, and the previews can talk about the heart of a champion.

“We know who we are and this is what we work for, and it wasn't anything we were going to find out about this team,” Watson said. “This team is very special we have the heart of champions. We have the heart and the mindset to be great, and that's what we wanted to do.