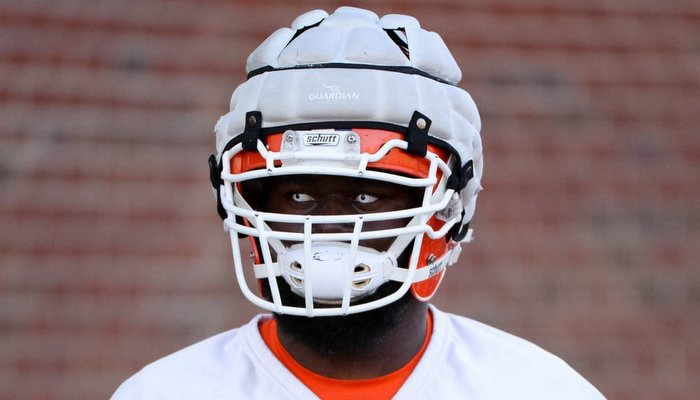 Kalon Davis and his scary eyes

CLEMSON - The 2014 season was special in many ways, and it marked the second complete evolution of seniors to pass through the program that I’ve covered since many of them were in high school. That means I called and talked to them when they were still sophomore and juniors in their hometowns, watched them through a redshirt year (for some) and four years of competition on the highest level of collegiate athletics.

There are times when it’s fun to go back and look at the pics TigerNet had of them in high school, or the freshman pics that were taken when they first arrived on campus and compare them to the senior year pics. It’s obvious how much they grew and matured throughout the process (even if it makes me feel old).

Along the way, there were some special moments and as we’ve said so long to this senior class I tried to think of a way to look back at their Tiger careers. We began with defensive end Vic Beasley

Vic Beasley
RS Sr. Defensive End
#3 6-2, 236
Adairsville, GA
View Full Profile , and today we move to the other side of the ball and profile offensive lineman Kalon Davis

I would be remiss if I just jumped right into the football aspect with Kalon, but there is more to Davis than the gridiron. There have been countless times we’ve gone into the WestZone for football interviews during the week, and I would see Davis at some table – alone – with a thick textbook open and taking notes.

For those who have paid attention during his time at Clemson, you know that he also loves to play soccer, loves Japanese culture and even took a trip to Japan last summer and even gave me suggestions on the best video games to buy for my son.

How he got to Clemson

Davis was a 3-star prospect out of Chester (SC) who committed to the Tigers in July of 2009. He was the ninth verbal commitment of the 2010 recruiting class, joining earlier commitments in DeAndre Hopkins

Reid Webster
RS Sr. Offensive Tackle
#77 6-3, 300
Woodstock, GA
View Full Profile . He had offers from Penn St., N.C. State, Vanderbilt, Wake Forest and Wisconsin among others. Late in his recruitment he listed a top three of Clemson, Wake Forest and Alabama but the Tigers’ early offer and the chance to play close to home were what put the Tigers on top.

Davis enrolled early – in January of 2010 – but still redshirted. Davis battled his weight and the depth chart during his early Clemson career, and then had surgery for a herniated disk. With his weight nearing 375 pounds, Davis went back to playing soccer and slimmed down considerably. He played 49 snaps in 2011, increased that to 166 snaps in 2012 and then started seven games and played 500 snaps in 2013. In 2014, he was arguably Clemson’s best offensive lineman, earning Honorable Mention All-ACC honors with 28 knockdown blocks in 903 snaps over 13 games. Davis also switched positions early in the season – after playing left guard for the majority of his Clemson career he slipped into the right tackle spot for a struggling Joe Gore

There are a lot of Kalon Davis moments I will remember, but like a lot of the Clemson seniors there are moments in the game against South Carolina this past season that standout. Davis had five knockdown blocks in the contest, and one of those was on a play that sprung Wayne Gallman

I will also never forget the first time he walked by me into practice, and I saw that he had the white-colored contacts. Of course, we all asked for interviews that day and took pictures, and we all just shook our heads and laughed and said, “That’s just Kalon.”

One moment will always stand out to me – Clemson played in the Meineke Car Care Bowl after the 2010 season, and one of the bowl excursions was a trip to Lowe’s Motor Speedway and a ride-along in a NASCAR-style car.

All of the players and coaches suited up in fire suits and helmets and took turns climbing into the passenger seat of a car and taking laps around the track. Of course, most race cars are built for people who are not built like football players - especially offensive and defensive linemen - and there were more than a few that had issues getting in and out. However, Kalon's exit of the car and the celebration that ensued when he finally escaped were priceless and we just happened to be standing right there with a video camera rolling....

Powerful offensive lineman who was one of the team’s best offensive linemen in 2014 ... played soccer in high school and played in an intramural league at Clemson to help with his footwork ... had 50 knockdowns in 1,618 snaps over 49 games (21 starts) in his career.

Another Chick-fil-A is coming to Clemson's campus