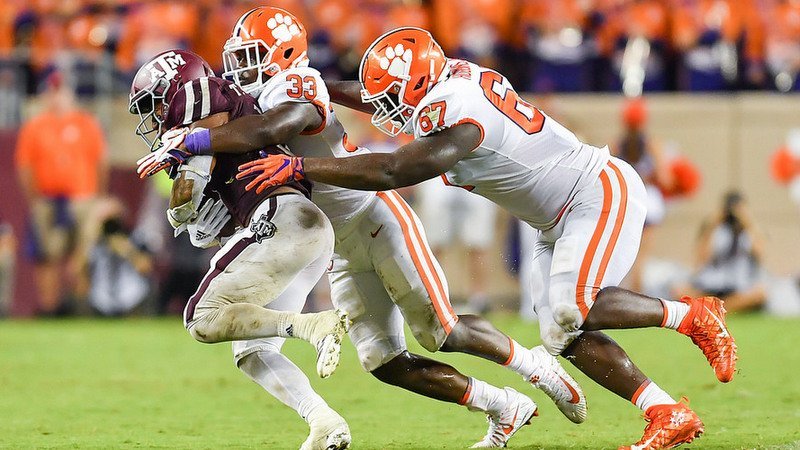 CLEMSON- The first road game of the season is now in the books, and linebacker J.D. Davis reflected this past Tuesday on his experience in Clemson’s 28-26 victory at Texas A&M.

“I thought it was incredible. Definitely a once in a lifetime experience,” Davis said during interviews earlier this week. “Awesome stadium, awesome fans, and an awesome venue. I would love to do it again.”

The game was back and forth with plenty of clutch plays but the one Davis enjoyed the most was one by his own defensive unit.

“My favorite play was probably the Clelin (Ferrell) sack fumble because that was a huge play. It turned the momentum around for us when we really needed it,” Davis said.

Every team has different traditions and for Daniel High School football, their tradition was mullets, a tradition that Cade Stewart is still upholding even now at Clemson. Stewart and Davis are both Daniel graduates and this past weekend the mullet must have been a good luck charm because Stewart got the start against the Aggies and the Tigers got the win.

For the Tigers, it is all business but for Davis, it’s also a mix of having fun out there.

“It’s like playing in the backyard again. It is something I have always dreamed of doing. When you put all of the preparation in all you can do is have fun,” he said. “It is my senior year so that’s all I’m looking forward to doing is having fun each time I get the opportunity to be out there. “

This weekend, if the weather holds off, the Tigers will be hosting Georgia Southern and Davis has been given a special opportunity to serve as one of the four team captains.

“Guys definitely take the captain role seriously; it is a huge honor,” Davis said. “I have worked for 4 years for this football team and to be named a captain means a lot to me.”

Usually, captains don’t get the opportunity to run down the hill on game days, but head coach Dabo Swinney told Davis and the rest of the captains that there was a way.

The unique entrance means a lot to this senior and in his eyes is a must.

“Coach Swinney actually said that there’s a way that we can run down the hill. If we couldn’t I honestly don’t know if being captain would be worth not getting to run down, because I only have a few more chances left.” Davis said.

For the next two weeks at home and then on the road at Georgia Tech, the Clemson defense will be tested by two different offenses that run the option. Davis says that both the Eagles and the Jackets run it completely differently.

“This weekend is definitely a good warm up. Each option team runs it differently and I enjoy playing the option. Georgia Southern runs it completely out of the spread,” Davis said. “They don’t do much cutting. It’s more physical that way. They are focused on running the option but will expose you in the passing if you let them.”