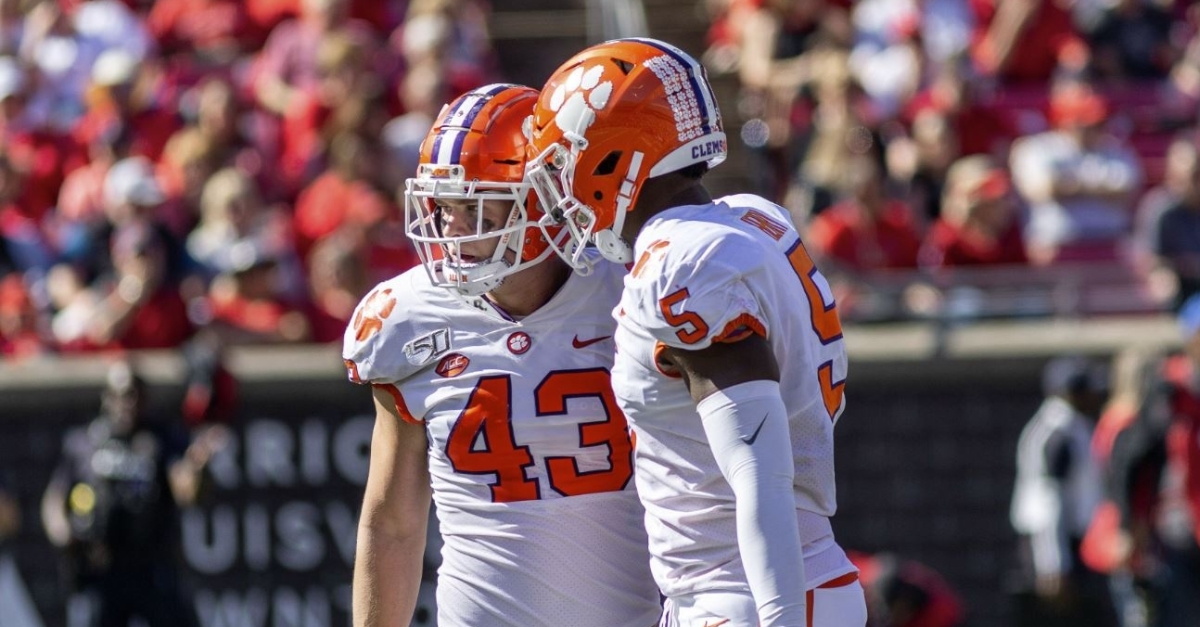 Clemson's defense is performing on an elite level currently.

Clemson overcame a slow start to finish strong in a 45-10 win at Louisville over the weekend.

TigerNet tackles week seven for the No. 2/4 Tigers with the key takeaways and game grades.

What we know about Clemson football (week seven)

* We might look back at that tiny space between the first and second quarters at Louisville last Saturday as the turning points in Trevor Lawrence’s season.

Lawrence ended the first quarter a dismal 3-for-7 with two interceptions. The last interception went right to a safety who was sitting in the middle of the field waiting for a mistake. However, the final three quarters saw the Georgia native complete 17 of his last 20 passes for 224 yards and two touchdowns. Lawrence was even a factor in the run game, carrying the ball 10 times to tie a career-high 45 yards.

Lawrence hit each of his first nine passes in the second quarter for 156 yards and looked more like the quarterback we’ve come to expect.

Head coach Dabo Swinney talked about Lawrence after the game and on his Sunday teleconference and said that sometimes it looks like Lawrence is trying to do too much. There are times when it’s ok to take the check-down, to throw it away on third down and live to fight another day.

That message was hammered home by Swinney in between the quarters and you can believe it will be hammered home this week. - David Hood

* Offense can tend to lead to these kind of analyses -- and especially this season with how hyped the Clemson offense was coming in. But make no mistake, what the Clemson defense is doing right now is nothing short of incredible.

Clemson defensive coordinator Brent Venables expressed Monday that he had plenty of concerns about the group going into this campaign after the sheer numbers lost in the front-seven, both among starters and backups. Clemson’s first-team group continued an elite production-level on Saturday, led by junior linebacker Isaiah Simmons, who continued his versatile dominance of the football field with eight tackles, two sacks and a pass breakup. He is around the ball just about every play and oftentimes in the backfield disrupting those plays.

Justin Foster filled the void and more left by Xavier Thomas being out due to injury at defensive end, forcing a fumble and tallying two sacks, 3.5 tackles for loss and five total stops. On the interior, Nyles Pinckney, Tyler Davis and Jordan Williams impressed as well.

Those groups worked in concert with the secondary to hold a potent Louisville passing attack to 8-of-22 throwing for just 107 yards with two interceptions. On the season, Clemson is now holding opponents under a 50-percent completion percentage (49) with a No. 3 ranking in both yards (144.1) and efficiency allowed (91.27). Have the combination of improvement in coverage to the variety of effective pressures in Venables’ defense already and there’s the makings of a truly special unit.

On offense, yes, the bad was bad, especially on the Trevor Lawrence interceptions. But there was also plenty of good.

The Clemson offense is continuing to evolve this season and that showed at points Saturday. Clemson showed a Pistol formation look that featured a fake to Travis Etienne that brought defenders into the box and let Amari Rodgers do some work one-on-one to help setup the Tigers’ first TD. On that score, Lawrence stepped up nicely in the pocket and freshman Joseph Ngata climbed the ladder for the reception in the back of the end zone:

Etienne continues to be a force only stopped by the amount of touches that don’t go his way, posting 12.6 yards per time with the ball versus the Cards. Since the UNC game, Etienne has been more of a focal point and that’s been rewarded in more yards and points for the Clemson offense the last two outings. That’s a sure-fire formula for success moving forward as Lawrence continues to find himself as a passer this sophomore season. - Brandon Rink

* Clemson’s defense continues to impress and it seems like a new player steps forward each week.

Last weekend against Louisville it was Foster. The junior out of Shelby (NC) tallied up the stats and was instrumental in A.J. Terrell’s interception during the fourth quarter.

“I think it might have been his best game,” defensive coordinator Brent Venables said. “Production-wise, it probably will be his most productive game. It was against a team that we really have tremendous respect for and how well they're coached and their scheme and their ability to have balance. It's hard sometimes for guys like that to show up as much and he really did today.”

The entire defense played well against the nation’s No. 16 offense Saturday. Clemson held the Cardinals to just 263 total yards and Louisville didn’t score a touchdown on the first-team defense.

Clemson now sits at No. 8 nationally in scoring defense, giving up just 12 points per game. Clemson is 25th in rushing defense, third in passing defense and No. 5 overall in total defense. - Nikki Hood

A slow start plus a strong finish equals a comfortable win this time around for the Tigers on the road, while still finding plenty of points for improvement moving forward.

As covered above, the Clemson defense continued to impress -- and this time versus a top-20-rated offense on the road.

Well, that was action-packed day for Clemson on special teams - complete with a muffed return by Derion Kendrick into the end zone that was luckily recovered for a touchback by Ngata, a 40-yard kick return later from Ngata, a 51-yard field goal (B.T. Potter responding from the FSU game) and a 44-yard miss (Steven Sawicki squandering a chance to make a statement), a less-than-stellar 36 yards per punt average and also quite the right hook from Andrew Booth Jr. for a penalty (and ejection) to set the punt coverage group back.