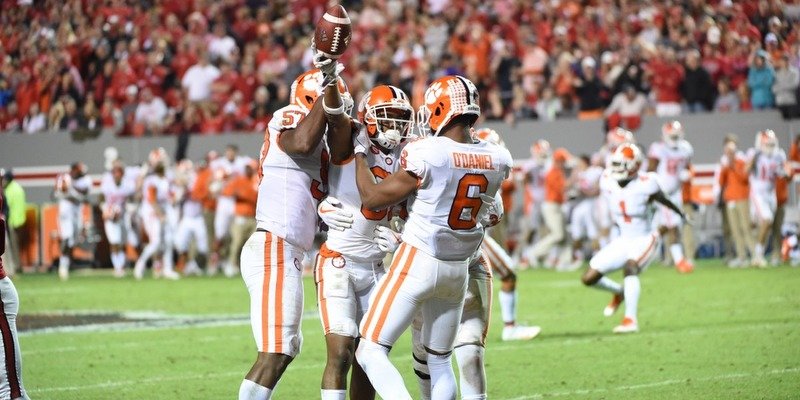 Jan. 1’s Sugar Bowl Playoff-round III of Clemson and Alabama is what starts the next season within a season in the hunt for back-to-back national titles.

Before kickoff between the Tigers and Crimson Tide, let’s take a look back at a third-straight playoff run, which had its share of close calls and remarkable efforts.

Here’s the top-10 plays (plus some key moments) from Clemson’s season so far:

10. Feaster takes it to the house

The Clemson offense put an exclamation mark on the third quarter at 20 N.C. State with its longest play from scrimmage this season:

Clemson left guard Taylor Hearn pulled and helped widen the hole on the right side of the line for sophomore running back Tavien Feaster to burst through for an 89-yard touchdown run. As it turned out, the Tigers used every score they could get to hold on to the 38-31 road win to essentially clinch the Atlantic Division.

After a strong debut against Kent State (eight rushes for 81 yards and a TD), freshman running back Travis Etienne didn’t see a snap in a nailbiter 14-6 win over Auburn. Next time out, Etienne shined under the lights at No. 14 Louisville, taking an inside run-outside and breaking tackles on his way to an 81-yard TD:

Etienne backed up that performance with a career-high 113 rushing yards and two touchdowns the next week against Boston College, including this 50-yard TD to break the game open in the fourth quarter:

While we’re talking Clemson-BC, Hearn gets a second mention in the top plays for his first-down rumble against the Eagles:

In the spectacular play range, freshman Tee Higgins contributed a pair in a 61-3 win over The Citadel. After some struggles in downfield passing prior, Clemson went to the air early and often to iron out those issues – Higgins on the receiving end for a game- and career-high 178 yards on six catches and two touchdowns. Two of those grabs were special:

7. Carter clutch down the stretch

Versatile senior Clemson defensive back Ryan Carter closed the Playoff push in style, forcing three turnovers with one strip and two interceptions – starting off a rivalry romp over South Carolina with a pick-six and coming up big in a blowout ACC Championship over Miami:

Clemson notched a win in week two that looked better as the season went on by controlling a 14-6 game over No. 13 Auburn. In only his second start, Kelly Bryant overcame being knocked out of the game temporarily and punched in both Clemson scores on the ground. The ACC Tigers’ defense did the rest with a season-high 11 sacks:

Clemson junior Ray Ray McCloud debuted a new number (No. 21) in-style by zig-zagging through the NC State punt coverage team to a 77-yard touchdown. The score was the Tigers’ first on a punt return since 2014:

Dorian O’Daniel’s standout senior campaign was marked in the first half of the season by a pair of pick-sixes. O’Daniel became the first Clemson linebacker to score on two interception returns, getting the ball rolling on a blowout at Louisville with a 44-yard return and sealing another top-15 win at Virginia Tech on a 22-yarder:

Clemson junior safety Van Smith stepped in with a critical pick to stem the tide of a fourth-quarter upset bid from Florida State. After cutting the Tigers’ lead down to 17-14, a Clemson fumble gifted the Seminoles the ball at the Tigers’ 40 with just under seven minutes left. One play later, Smith read FSU freshman quarterback James Blackman’s throw and picked it off. Clemson went on to score its next two drives for the 31-14 win:

One play. 61 yards. Seven missed tackle attempts. Hunter Renfrow used the whole field on a quick screen pass from Kelly Bryant to open the second half at South Carolina with a touchdown reception, giving Clemson a 27-0 lead and quickly ending any hopes for the home team. The catch and run embodied the “Leave no doubt” mantra of the Tigers’ 2017 campaign:

Stepping in for injured starter Tanner Muse in a thin Clemson secondary already, sophomore safety K’Von Wallace jarred loose a sure TD catch in a NC State bid to tie or take the lead in the final minute. On fourth down, Wallace was there for the game-sealing and de-facto-division-sealing interception:

The Tigers never looked back after the close-call in Raleigh, averaging a 33.5 margin of victory over the final four games of the season.