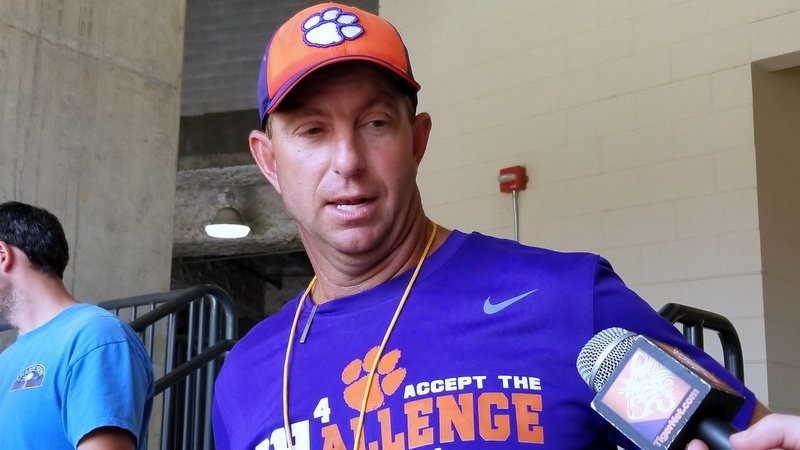 CLEMSON – Tuesday’s stadium scrimmage was more competitive than the Saturday scrimmage dominated by the offense, but Dabo Swinney was disappointed in his quarterback’s zip code skills.

The Tigers held a situational scrimmage in Death Valley Tuesday morning, and Swinney said he was pleased that defense responded.

“Today was a fun day. I was not worried. I was anxious to see how they might show up today because yesterday was a really tough practice that went late, then it was back in meetings at 7:45 this morning, so a really quick turnaround,” Swinney said. “Our camp is scheduled to really develop everything - physical toughness, mental toughness, the ability to push through when they need to. That’s the biggest positive I take from today, I thought they competed. I didn't see anybody woe is me dragging around or I'm on whatever day of camp. They went to work and there was good energy. That was the thing I was most pleased with.

“The defense, I thought had a better focus today. Today was more competitive. I can't really say one side won the day and I kind of like it that way. It was very competitive on both sides. Offensively, too many mistakes from a discipline standpoint - jumping offsides. We're very undisciplined right now as an offense in terms of staying onside. Our receivers - we had multiple receivers jumping offsides - a tight end jump offside, a tackle jumping offsides. Things that can't happen. Just some critical errors that way but a lot of good things. I'm pleased with what I saw out of the backs. I thought Adam Choice was awesome today. It was by far his best day - really, really productive. The other three had nice days as well, but I thought Adam really stood out today.”

The Tigers worked on red zone, third and fourth down and had the kickers kick off of certain situations.

“Today, we controlled the situations. Sometimes when you go out and scrimmage, you don't get enough work on redzone or 2nd-and-long or 3rd-and-1,” Swinney said. “We always take one of our three scrimmages and create the situations and I make sure we get the work. Then, it's an opportunity for us to teach. The only kicking we did today was field goals as it occurred throughout the scrimmage. It was really good. We got a lot done.

“I thought the defense did a better job of winning some of those 50/50 balls that they didn't win the other day. I don't think they like seeing themselves go viral on social media. I thought the defense won the majority of the 50/50 balls today. We had Trayvon back today and he's a pretty good player to throw back in there. Just overall, I think we got a lot accomplished. We did make a game-winning kick with Huegel in a two-minute situation.”

Swinney said the quarterbacks were good but missed too many zip code throws.

“They did a good job. Today I thought we had too many no touches. We have some zip code wideouts, you know just get it (the ball) in their area,” Swinney said. “We were out of the zip code too many times today. One hundred percent of the balls they don’t touch they don’t catch. I’m always on the quarterback’s side, but if you can’t touch it you can’t catch it. We’ve got to give those guys a chance to catch the ball. We’ve been really good all camp, though.”

“I was really impressed with what I saw from Denzel Johnson and Nolan Turner,” he said. “We gave both of those guys a lot of work with the ones today. Both of those guys have really made a move this camp and both of them had huge plays. Denzel had a breakup to win the game in two-minute and Nolan had a big fourth down stop. Just encouraged by the depth we're creating there at safety. Those are two guys we need to count on and so far they're having a good camp.”

Kicker Greg Huegel is ahead in the battle to be the field goal kicker.

“Huegel is still a little ahead but it's still very competitive. It's like any other position, we chart everything. Whoever wins - whoever has the best grade - will start,” Swinney said. “That means you earned it in practice. If we played today, he (Huegel) would run out there first, but we don't play today. I think Huegel is 80-something percent and Spence is upper 70s. Potter is doing a really good job as well. If he's the best guy then he could win that job. He's doing a great job in the field goals too. He's third but he's been pretty consistent with what he's done with his reps and getting better and better from a confidence standpoint. He had a couple of kickoffs the other day that were nine (yards) deep. We haven't allowed Greg to kick yet, so a lot will depend on what he does when he can kick.”

Swinney then said that freshman running back Lyn-J Dixon will likely avoid a redshirt.

"I think he's well-positioned right now to probably not redshirt. It's hard," Swinney said of Dixon. "You need four backs and you're going to lose one for sure this year in Adam. He's a senior. Definitely, though, we can go through and if he's not getting the right amount of playing time at midseason, you make a decision. Right now, he's a guy who can probably help us in situations but also on special teams. Those first three have done a nice job but Lyn-J has shown he can hang with any of them."