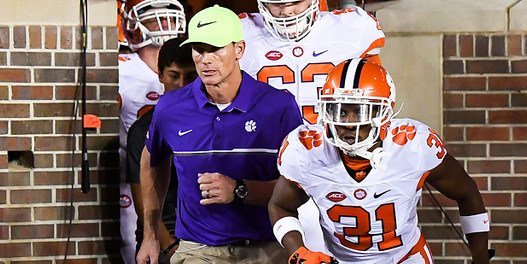 There has been a lot of speculation about where Venables will coach next year.

If you’re looking for rumor, intrigue, innuendo and a “the sky is falling mentality” you’ve come to the wrong place, especially when it comes to defensive coordinator Brent Venables.

Even though there are games left to be played, the college football silly season has started. Schools across the country are firing coaches at an alarming rate this season, and that means the internet rumor mill is fired up and running around the clock.

Schools like Nebraska, Tennessee, Miss St., Arkansas, and Arizona St. all have job openings, and it doesn’t take an insider to realize that Venables is an attractive candidate. His defense is ranked sixth nationally this season, finished eighth in 2016, 10th in 2015 and number one overall in 2014. That’s a remarkable run of success. He’s not only the architect of the defense, he’s a valuable recruiter who also has a track record of developing players and sending them to the next level.

He’s also a part of a program that is winning at a high level these days – the Tigers are 39-3 over the last three seasons – so he’s a hot and viable candidate and both Miss. St. and Arkansas have expressed interest.

But, if you’re looking for me to say I have insider info I can’t release but know or post non-credible rumors in an effort to get clicks, you’ve come to the wrong place. Yes, I’ve gotten texts from people who are wondering about planes and tail numbers and tracking which coach is where. People love to read the rumors and then duly go into meltdown mode. There are other websites for that, some of them with a Clemson affiliation. I am going to tell you the truth as it stands today, and if it doesn’t get hits, that’s ok.

There has been a lot of speculation about where Venables will coach next year."

From everything I am hearing, Brent Venables is happy at Clemson, and he’s genuine when he says his total focus on beating Miami Saturday.

“My focus is completely on this game and this week and the great job that I do have and the great players I get to coach every day," Venables said Tuesday. "So, you know, my focus is right here.”

He was asked about the coaching rumors, and while his answer won’t appease a lot of fans who want a clear-cut yes or no answer, it’s typical Venables.

“Well, because y’all bring it up it’s annoying. I don’t hear about it otherwise, whatever’s out there, because I just don’t spend any time focused on that," he said. "I’ve got a great job, and I’ve said that many, many times. I’m very thankful and grateful for that. We’re in a great position so why would I be worried about what’s on the other side of the fence. I’ve always felt that way. If people have interest, that’s part of (coaching), and you either decide to listen or not.

"Right now, we’ve got a tremendous opportunity this week playing for a championship and my loyalty is to here and our players.”

The raise Clemson gave him this past offseason bumped his annual pay up to $1.7M, which is more than 56 head coaches made last season. His kids are growing up here, he has one son (Jake) committed to play for the Tigers and another (Tyler) that just picked up a Clemson offer.

I texted someone close to the situation Monday, and the text I got back was, “Why would he leave?”

Venables isn’t the kind of coach who’s happy to meet with the media. He is always gracious and giving of his time, but he’d rather be coaching football, hanging with his players and avoiding the media spotlight. He’s so involved in just being a coach that he likes to grab a football and transform into Jimmy Greenbeans, the scout team quarterback.

That isn’t what head coaches do these days. In the multi-million dollar business that is college football, most head coaches are CEO’s, the face of the program. Venables, by the sheer nature of his personality, is happier doing the grunt work.

It doesn’t mean Venables leaving won’t happen. He will, someday. Maybe it will be this year, maybe next year, or maybe years down the road, But when he told the media Tuesday that his full concentration is on beating Miami, I believed him. He’s loyal enough to his players and Swinney that he won’t let something like this interfere with his work. Clemson has had other coaches itching so bad to get out the door and become a head coach they offered to fly the plane themselves. That isn’t Brent. Not even close.

My guess, as of right now, is that those schools will find their perfect candidate and when we enter spring practice Venables will still be Clemson’s defensive coordinator. If he isn’t, Swinney (as he has told us in the past) already knows who the next guy will be.

Rumor. Intrigue. Innuendo. That isn’t the Brent Venables way. When something tangible happens, we will all know it. Cherish the fact that he's at Clemson now and as long as he wants.