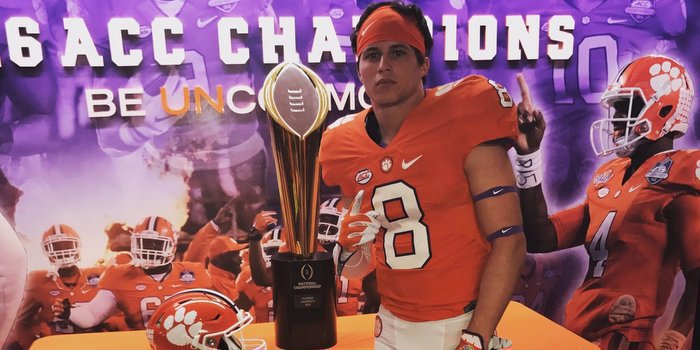 The saga of Hunter Renfrow gives players like Will Brown hope.

Brown, a 2017 wide receiver out of Boiling Springs (SC), officially signed with Clemson as a preferred walk-on during his school's signing ceremony on National Signing Day. Brown grew up rooting for the Tigers, and he sees Renfrow as a shining example of what happens when a player puts in the time and effort to be great.

But it was a former Tiger that helped Brown get in touch with the Clemson coaching staff.

“My strength coach. Chad Diehl, he played fullback for Clemson when C.J. Spiller was there, and he was a big help to C.J.’s cause when he was,” Brown told TigerNet. “He is tight with the coaching staff, and he helped me get in on the recruiting list one week. After the game, we went to see Coach Dabo Swinney, and we talked to him, and he told me that if I got accepted into Clemson I would have a spot on the team. That was after the N.C. State game.”

Brown made sure he got accepted and got the call he'd been waiting to receive.

“Right after I got accepted, Coach Swinney called me and told me that I had proven myself enough,” Brown said. “He confirmed to me that I officially had a spot. I will be moving in on June 25th and start the second summer session.”

Brown has since been in contact with his future position coach, Jeff Scott, and toured Clemson’s sparkling new football operations center a few weeks ago. 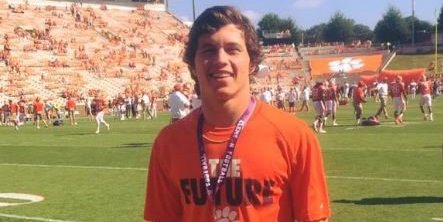 Clemson is, as usual, loaded at wide receiver, but Brown says he has the work ethic to be seen.

“As a smaller receiver (5-10, 175) and as a guy not heavily recruited out of high school, I know that when I come in not a lot of people will be looking for me to make something happen in my first couple of years,” he said. “What I have to do is set myself apart by the way that I work and by the time and effort that I put in every day at practice and the way that I am willing to prepare for the opportunity. Even if the opportunity never comes, I am going to prepare like I am going to be the main the next day. Clemson is the school I grew up pulling for and the only school I ever wanted to go to, and that gives me the motivation and makes me want to work even harder.”

Renfrow is a former walk-on who earned a scholarship and has been a key part of Clemson’s National Championship run, catching the game-winning touchdown pass against Alabama with one second left on the clock last month.

“It gives me hope, seeing a guy like him,” Brown said. “He wasn’t heavily recruited, but he showed that if you work hard and have patience and pay your dues, it all works out for you. If you are doing the right things and trust in the Lord, it will all work out like it’s supposed to.”

Brown runs a 4.6 40-yard dash, and he had 82 receptions for 1,281 yards and 13 touchdowns during his senior season (11 receiving, one punt return for TD and one rushing touchdown). Brown caught 11 passes for 144 yards in the 5A state championship game.

Once a dream. Now a reality. pic.twitter.com/9Ssfin7b7F