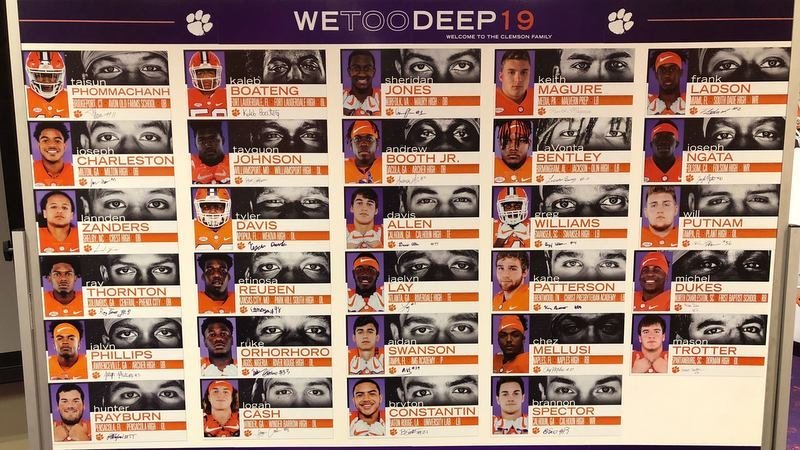 Clemson head coach Dabo Swinney told the media the second national signing day is a bridge to spring practice and the 2019 season.

“We are excited about everybody joining our program, and it's a big day. Even though we had the signing day in December, today is a celebration of the completion of the class and, to me, it's turning the page and turning our eyes to the 2019 team and getting started,” Swinney said. “We had a challenge in this class. The winningest class in college football history just walked out the door. You talk about some impactful leaders - graduates and leaders and so much a part of our culture here. All those guys walking out, it was important we do a great job with this class.

“Time will tell, but I think this group will continue to help us be a consistent program on and off the field. They have bought into who we are and the way we do things. I am really excited about this group - it's the biggest group we've signed. And to have 17 of them here is huge, especially with so many seniors gone. Particularly at d-tackle, otherwise, I don't know how we would practice this spring.”

Swinney said the coaches added players that fit all aspects of the program.

Dukes and Trotter are two big additions to the class.

“Today, we signed Mikey Dukes, the running back out First Baptist, a guy that we have tracked for a long time,” Swinney said. “He has been in our camp, comes from a small school but is well-coached and that's a winning program. He's a guy that is dynamic and can do a lot of things. He's great in space as has good ball skills. He's a great basketball player and a young man that we think really fits what we are looking for at that position. So really big to get him in the fold.

“Mason Trotter is an offensive lineman from Dorman, and we're really excited about Mason as well.”

The coaches will head off for their annual skip to Colorado and return in time for a staff meeting next Wednesday. The 13th will also mark the beginning of All In drills, with spring practice starting February 27th and the spring game kicking off on April 6th.

“Fun day for us. Always a fun day for us to celebrate recruiting, especially this 2019 class. We signed pretty much everybody in December and had a couple that we added today and then some preferred walk-on guys that we are excited about joining us as well,” Swinney said. “In December we signed 27 guys, 17 mid-years, so those guys literally moved to Clemson while we were in California and were waiting on us when we got back. They had a chance to go through the parade and the banquet and all that stuff, so really kind of neat seeing those guys when we got back. Haven't had a chance to see them very much since we got back so I am excited about getting back plugged in.”

However, he mentioned that injuries would hurt depth on the defensive line during the spring.

"Nyles Pinckney had to have surgery on his pec (pectoral muscle)," Swinney said. "He had a slight tear in his pec. He is out for the spring (practice), but we know Nyles can play. Nyles will come back this summer ready to go. He had an excellent year in his sophomore campaign."

Jordan Williams is the other defensive tackle out for spring.

"Jordan Williams was over there playing basketball a week or so ago, but he is having to have some type of screw put down in his leg," Swinney said. "He is going to be out for spring. And that was our two starters going in."

Swinney was optimistic that both veteran players would be ready to play this season once they get healthy.

"One is going to be a junior and the other a sophomore," Swinney said. "But the good news is both those guys got a ton of experience this year and really learned a lot. And obviously had a great model in front of them with those guys as to what we got to do. I think they will provide great leadership. So that is the good news. They will be alright."

Next man up is going to be Xavier Kelly.

"The bad news is they are not going to get any reps and all the reps are going to freshmen with the exception of Xavier Kelly."

"Garrett most likely will not be back in the fall," Swinney said. "He is around this spring, and he will be out there helping us. He is dealing with his health issues. He’s getting his knee back right. He’s got a lot of things he is dealing with. But he really wants to go into the military. So right now I would say he is probably not going to be back, but we’re kind of leaving that open-ended right now."

Swinney is going to keep all the options on the table and allow Williams time to make his decision.