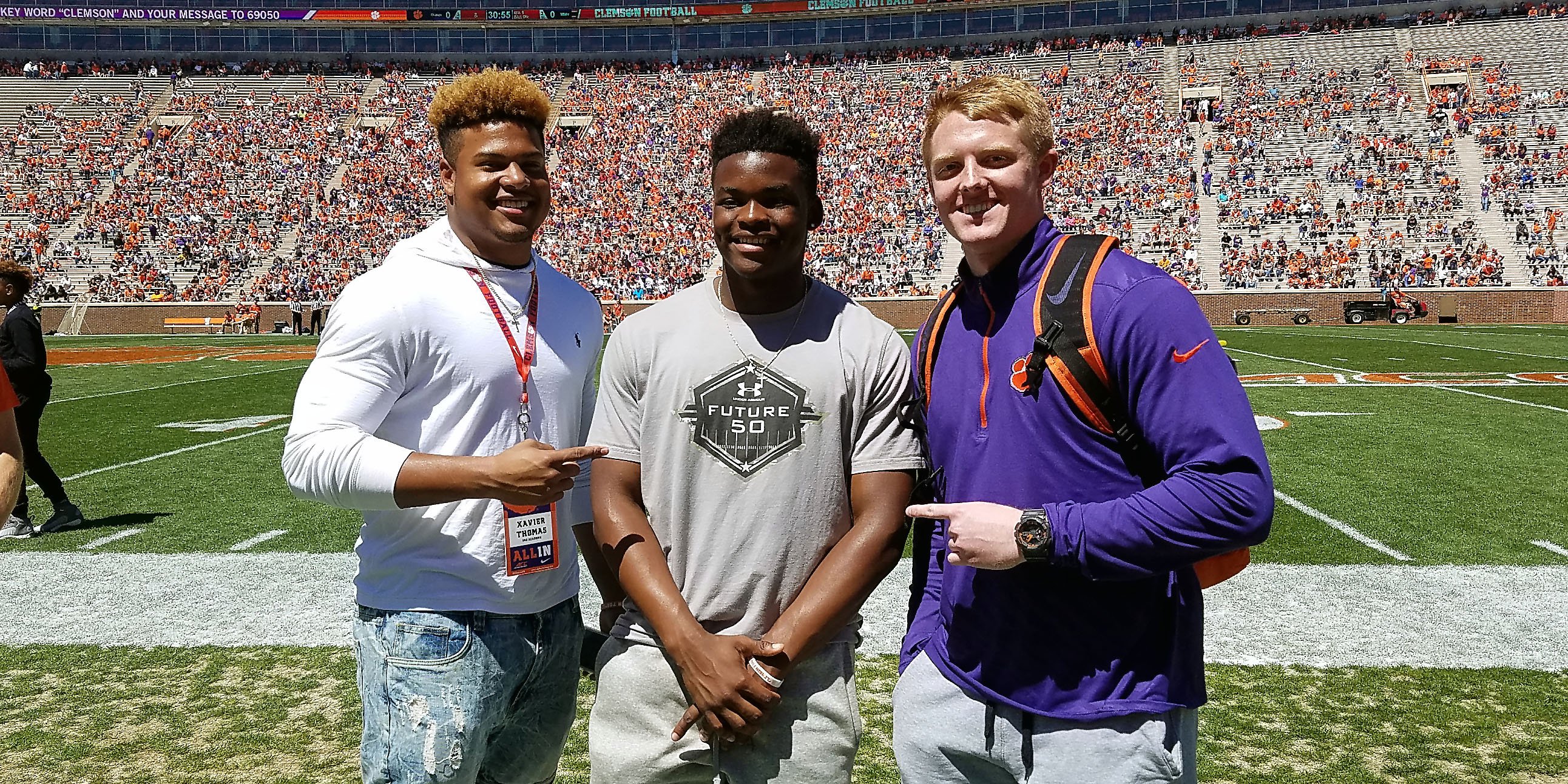 Xavier Thomas, Mike Jones and Jake Venables are three members of the 2018 class

The national narrative has changed, and it changed quicker than I thought.

The news surrounding Clemson’s football recruiting has been mostly good for the past week, and it’s easy for those of us who follow the program on a daily basis to keep up with just how good things happen to be at the moment.

In case you’ve missed it, the Tigers already have commitments from quarterback Trevor Lawrence and defensive end Xavier Thomas, two of the top three players in 2018 recruiting. The Tigers are also in good shape with three or four more players that dot the recruiting services top 10.

Elite? You better believe it. And you had better believe the rest of the country is taking notice as Clemson joins Alabama and Ohio St. as perhaps the top three recruiting powerhouses nationally. The national media descended on Clemson for National Signing Day and for the opening of the new football operations facility, and it finally dawned on many of them that head coach Dabo Swinney has quietly built a recruiting monster in the foothills of South Carolina.

I sat at my desk Monday afternoon, exchanging texts with a notable recruit about a possible visit, and I was reminded of two fairly recent instances when there were still doubts that little old Clemson could compete with the designated bluebloods of college football.

Both instances, ironically enough, happened in Phoenix. The first one occurred on the media shuttle from the hotel to University of Phoenix Stadium for the title game against Alabama in 2016. Nikki and I sat in the middle of the bus and were caught in the crossfire as several national media members debated Clemson’s chances in that game. Keep in mind, they weren’t debating whether Clemson could upset the Crimson Tide. No, they were debating – rather heatedly – whether or not the Tigers would be within three or four touchdowns at the start of the fourth quarter.

One of them caught the smirk on my face – he stopped beating the SEC drum long enough to care – and asked my opinion. I explained that I really didn’t bother with conference affiliations when trying to decide who had an advantage in a football game. I’ve seen enough football to trust what my eyes tell me, and my eyes told me that Clemson was not only talented enough to hang with the vaunted Tide, I thought if they limited their mistakes they had a chance at an upset.

“I’m sorry,” he said. “I know you cover Clemson on a regular basis, and it would be great for you guys if Clemson was to pull off the upset, but there is just no way they can compete with the athletes Alabama puts out on the field. It’s grown men against boys, and Clemson doesn’t recruit well enough to hang with a SEC heavyweight.”

The bus ride back that night was a little more somber as many of them came to the realization Clemson could not only hang with that heavyweight, they had some grown men of their own.

Fast forward to this past season, and we were once again in Phoenix, this time at the media hotel. We had just finished an interview session with Chris Fowler and Kirk Herbstreit where both had said they thought Clemson could beat Ohio St., and Herbstreit had mentioned that the Buckeyes were fragile enough to get blown out.

We settled in front of a television in the media hospitality room to write and transcribe, and members of the Ohio St. media contingent settled in across from us. One of them owns a Buckeye website, and he was openly laughing at Herbstreit’s prediction.

At that moment, a preview of the Michigan-Florida St. Orange Bowl game came on, and he laughed and said there was no way that the Seminoles could hang with Michigan. He smugly said he had seen Michigan in person, and other than Ohio St. they might be the best team in the country and that Florida St. wouldn’t be expecting the Big 10 brand of physicality.

One member of our group mentioned that Florida St. was not only physical but fast, and the Buckeye loudly chortled at the thought of an ACC team hanging with Michigan. He and his cronies began to then dissect the matchup between Clemson and Ohio St., and it came down to one thing: Clemson can’t recruit like Ohio St. and the Buckeyes were simply better on both lines of scrimmage, at running back, in the secondary, at linebacker, and their receivers were the equal of if not better than what Clemson could put on the field.

“I can see a scenario where the Buckeyes turn it over three or four times and Clemson is still in it at the beginning of the fourth quarter, but Urban Meyer has this team as focused as any I’ve ever seen,” he said. “They are too good. In reality, something has gone terribly wrong if this is closer than three touchdowns.”

Well, buddy, it all went terribly wrong. I cornered him later, to ask his thoughts on both Michigan and Ohio St. losing, and he graciously admitted, “I didn’t think Clemson was all that good until I saw them in pregame warmups. And then I knew Ohio St. was in trouble. They look different than anybody else we’ve played.”

That was echoed a few days later when I ran into an Alabama assistant on the sidelines at Raymond James Stadium as he watched the Tigers go through pregame warmups. “They look like us,” he said. “No other teams we play except for LSU look like us from an athletic and body standpoint. But they do. They look just like us and LSU.”

Clemson has been recruiting at an elite level for a while now, but while others may not have thought of it as “elite” because of the number of stars by a prospect’s name, the coaching staff has done an unbelievable job of not only developing top-tier talent, they’ve been able to go out and find the under-the-radar guys like Grady Jarrett and Hunter Renfrow.

Elite? Yes, but we’ve known that for a while and we’ll welcome the rest of you to the party. And like Swinney has said on multiple occasions since winning the title in January: "The best is yet to come.”