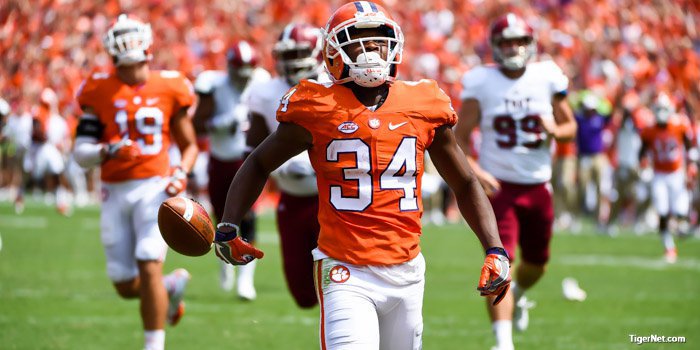 CLEMSON – Ray-Ray McCloud made one of the mistakes a skill player or return man can’t make when he dropped the ball just feet from the goal line.

But instead of sulking over his woes or pouting that he didn’t score the touchdown, he took his head coach’s advice, “To grow up,” and he quickly turned the page to the next play, ending the game as the team's leading receiver.

McCloud finished the game with seven catches for 86 yards in Clemson 30-24 win over Troy Saturday afternoon in Death Valley, but it is the dropped punt just feet from the goal line that will be burned into the memory of Clemson and college football fans.

Troy punted the football late in the second quarter of Clemson’s 30-24 win Saturday afternoon, and after two bounces McCloud picked up the football and raced what appeared to be 75 yards for a punt return touchdown.

His elation quickly turned to dismay, however; the replay showed that the sophomore dropped the football short of the goal line.

McCloud said he didn’t realize at first the mistake he’s made.

“I was kind of shocked because I've never done that before,” McCloud said after the game. “It just happened so fast, and everything happens for a reason. I know it won't happen again, but I've just to keep on moving. I didn't realize it until someone came over and asked me if I scored and I was like, 'What are you talking about?' I looked up and saw the replay.”

The Tampa native, however, met with the media following the game and owned up to his mistake. 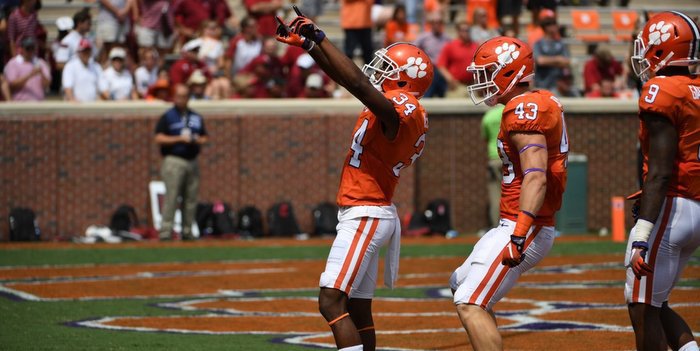 “I was just playing fast and got excited and didn't finish the play. Coach Swinney has already bashed me about it,” McCloud said. “You're going to leave with that play in your mind, but the next game I'm not going to think about it. It was just a mistake I made that I'm sure won't happen again. It's time to go on to the next game.”

McCloud said he’s seen players make the mistake before, but never would he have thought it would happen to him.

“He's (Swinney) never told me about DeSean Jackson, but I know about it from watching it. He told me to finish my plays and give the ball to the ref,” he said. “I've seen a few players do it before. I wasn't thinking about it when it happened. I've seen it happen before, but that's the first time it's happened to me. Like I said, I just have to keep my cool. It will make your stomach drop. It's like, 'Dang, I did all of that for nothing.' It happens, and it happened for a reason. I'm going to score again on a punt, and I'll finish.”

As egregious as the mistake was, McCloud said head coach Dabo Swinney met him on the sideline, complimented him on the play, but then gave him one piece of advice.

“He told me that it was a great play but that I have to grow up. He pulled me back in and told me that I was made for that type of play and for me to keep playing and put it behind it me,” he said. “What he told me was to grow up, and that's what I've got to do. There was no yelling or anything like that. If they would've gone down and scored, he probably would've gotten on me more. I feel like the coaches have confidence in me, and it was a mistake. It happens to the best players, and I came back out and just put it behind me and kept playing football.”

Part of that growing up process will begin as he turns on his phone and sees messages from friends and family as well as clips from what will surely be a highlight – or lowlight – on ESPN.

“I haven’t checked my phone yet. It’s still off, but I’m pretty sure that it will have a lot on there – videos, Twitter, Instagram,” he said. “I just have to step it up more so that people don’t think about that play, and they will think about a really good play.”