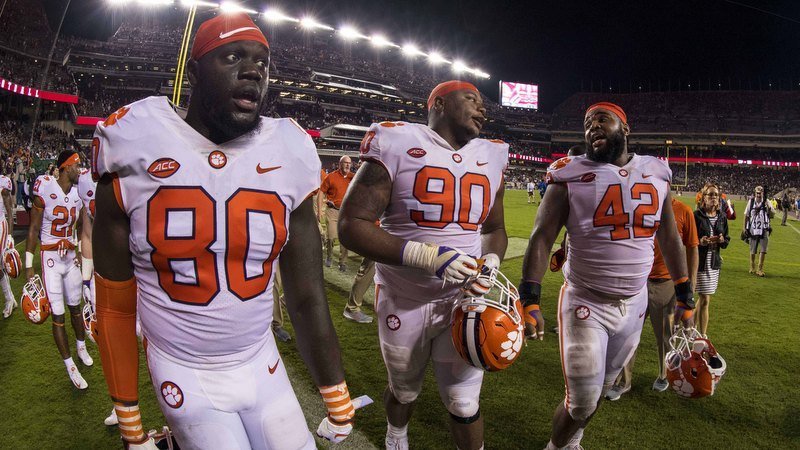 Clemson players walk off the field after the win over A&M (Photo by Jerome MIron, USAT)

COLLEGE STATION, TX – A hot and humid walk from the Kyle Field press box to the postgame interview summed up the wild swings of momentum and emotion during and after Clemson’s 28-26 victory over Texas A&M Saturday.

No. 2 Clemson survived a second-half onslaught from the Texas A&M offense and quarterback Kellen Mond, making just enough plays on offense and defense to secure the win in front of 104,000 fans on a sweltering Texas night.

Walking onto the elevator for the ride down to the playing field, one Clemson fan turned to a buddy and said, “This feels like a loss.”

A Clemson official shook his head near the team bus and said, “The only stat that matters is the final score.”

A relieved head coach Dabo Swinney was asked about grading his team’s effort and he broke into a relieved smile before saying, “A. We won. Hard to grade any better than that. We won the game so that’s all you can go on. At the end of the day its all about results. We could have done an awesome job and lost and nobody would have cared. We won the game and that’s all that matters.”

The Tigers had chances to put the game away, including a 4th-and-goal chance late in the first half, but a fumbled snap thwarted the scoring opportunity. It was one of many missed chances for the Clemson offense.

“If you’re a championship team you have to make that,” Swinney said.

Clemson isn’t a championship team. Not yet. But they don’t have to be. The team won a tough game on the road in one of the nation’s toughest road environments (with the added difficulty of weather), but there are spots that are concerning.

The offense ran just 59 plays and was 4-of-13 on third down. The offensive play calling is ultra-conservative with a lead, but in college football, there are times when the lead isn’t big enough. The lack of plays comes from a few factors – the offense had five 3-and-outs and eight drives with five or fewer plays. The defense also failed to get off the field for much of the second half – Texas A&M ran 20 plays for 199 yards in the fourth quarter alone. The Aggies converted 2-of-4 third-down opportunities but more importantly, Clemson was 0-3 on third down in the final stanza.

Mond was 11-for-17 in the final quarter for 206 yards and receivers ran free in a Clemson secondary that looked lost. The Aggies gained 501 yards of total offense, the most since giving up 568 to Louisville in 2016. The games are eerily similar – Clemson jumps out to an early lead, the opposing team comes roaring back and a weird play at the end of the game seals the deal in Clemson’s favor.

Clemson went on to win the National Championship.

The Tigers aren’t championship material yet, but like that Louisville game, they will survive and advance and hope to get better as the season progresses.

Not to be lost is the play of Mond, who was as good or better than advertised and shrugged off pressure on multiple occasions to make throws lineman field. This Texas A&M team looks like they can make some noise in the SEC West, and Mond will make a lot of people take notice this season.

I disagree with the first fan. The game doesn’t feel like a loss. A Clemson defensive lineman summed it perfectly when he walked out of the locker room and saw one his teammates. He shrugged, smiled, and wiped his hand across his forehead, mimicking saying, “Whew.”

Whew is right. What a night in College Station.