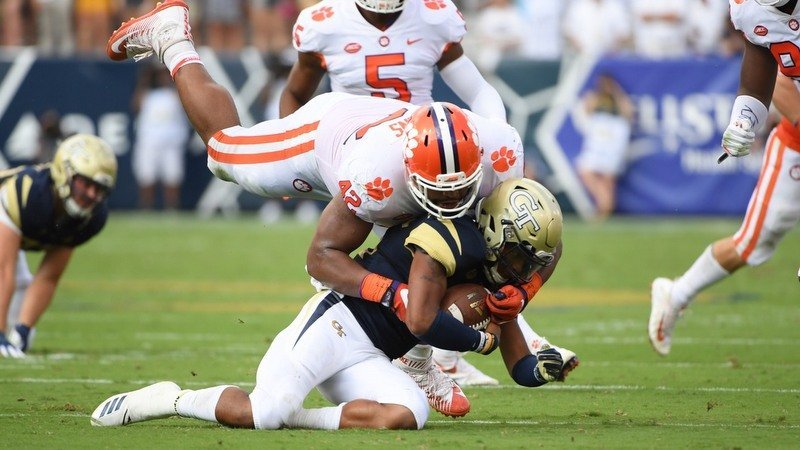 Christian Wilkins unloads on the ballcarrier

Georgia Tech’s first drive of the game went 11 plays and covered an initial 62 yards and took nearly seven minutes of the clock, but Clemson’s defense never panicked. They stayed true to their word of the week, and essentially shut down the Yellow Jackets’ offense in Clemson’s 49-21 win Saturday afternoon.

Starting middle linebacker Tre Lamar said Georgia Tech came out with a few wrinkles on the first drive, but the calmness of the defense took over and allowed the Clemson defenders to settle in.

“It was some new stuff that we hadn't seen before and it worked, but I feel like once we settled in we really showed what we were about. Drives after that went well,” Lamar said. “We're trying to stay calm. Our word for the week was poise for this game. They're going to make plays. They're always going to make plays, but to settle in and know that even if they make plays, we'll stop them. Bend don't break. We just had to be poised throughout the game and poised during that first drive.”

“We didn't really make too many scheme adjustments. It was just settling into ourselves and like, 'Ok, we know what the game speed is and we know what it looks like now,’” Ferrell said after the game. “Any time, you go against the scout team and Coach V is the quarterback, he's not the same as No. 16 out there. He doesn't have the same speed as him, so it's a little bit different. He can't do all of the fake pitches. It was more of just getting zoned in and getting used to the speed of the game and the way they run it. I feel like it was the same way with going against the o-linemen. We really just settled in.”

Their patience paid off on the second drive when Lamar forced a fumble that was batted around by J.D. Davis and Christian Wilkins before Ferrell finally fell on the ball in the end zone for the first points of the game.

“I think it got us started. I felt like either way we were going to have a good game. I feel like that play kind of jumpstarted our offense and our defense,” Lamar said.

Ferrell said he enjoyed the rare opportunity to impact the scoreboard and hopes he has shown the coaches enough for more chances to score touchdowns.

“We work the loose ball drill a lot. I just feel like I should have more opportunities to score touchdowns - trick plays, stuff like that,” Ferrell said. “We have that package with Dexter and Christian but we don't have a package where me and Austin go in and I play wide receiver. They just need to throw a fade up to me. It's cool with me, but I'm happy just happy playing defense. We have to get on more footballs. They put it on the ground eight times today and won the turnover margin. We've got to be better than that.”