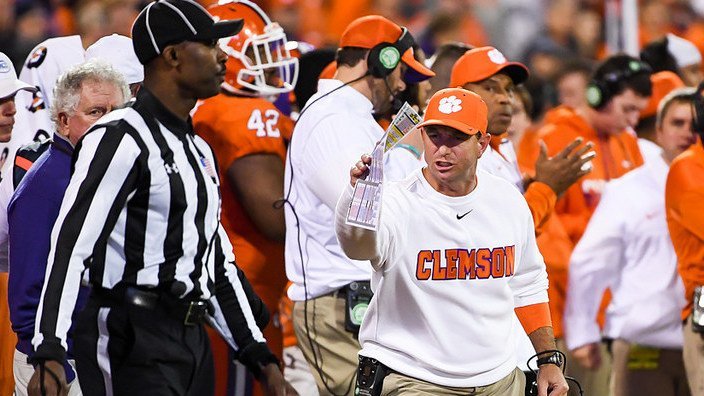 College football coaches, even those in the same conference, don’t spend a lot of time together but that doesn’t mean they don’t keep up with what their peers are doing. Pitt head coach Pat Narduzzi has faced off against Clemson head coach Dabo Swinney just once in his career, but he knows what he likes about the Tigers’ head man.

Clemson and Pitt face off against each other at 8 pm Saturday in the ACC Championship Game. Kickoff between the Tigers (12-0) and Panthers (7-5) is scheduled for 8 pm and will be broadcast on ABC. It’s the first meeting between the programs since Pitt upset Clemson in 2016.

Narduzzi has kept a watchful eye on Swinney and the Tigers and says Dabo has brought Alabama to the upstate of South Carolina.

“Yeah, I mean, obviously Dabo has done an incredible job. He's not only a football coach, but he's a businessman,” Narduzzi said. “He's got the tools he needs down there, the facilities, their slides, movie theater outside, backyard barbecues they have. They've got a unique place down south. They're able to attract a lot of talent.

“They've done a great job winning football games which has helped the consistency of bringing more talent there. They got a ton of tradition. Like I said, Dabo really has done that. He has some Alabama ties. He's doing a little bit of the (Nick) Saban way. He's building another powerhouse there in the Atlantic Division of the ACC.”

Narduzzi hasn’t spent a lot of time with Swinney but does have a lot of respect for his opponent.

“He's done an unbelievable job. As coaches, whether they were in our division or not, we don't spend a whole lot of time as coaches together,” Narduzzi said. “The times you do are at ACC Media Days where you spend time with them.

Narduzzi then said that not only is Swinney a businessman, but he’s also a CEO who hires good people and lets them do their job.

“He's a teacher first of all. He's a teacher. He's a motivator. He's a businessman. He's the CEO of Clemson,” Narduzzi said. “I think that's all you have to be. You hire other coaches to do those other things maybe that you haven't done or care to do.

“Whether you've been a coordinator on offense or defense or special teams, or haven't, doesn't mean you couldn't have done that. Talking enough football in life with Dabo, he's a smart guy, can do anything he wants to do.”

All of those qualities make Swinney a good leader.

“I'm sure he has a lot of ideas in that office with what should be done or why don't you try this. But he's a great football coach because he can lead a team. The kids believe in him,” Narduzzi said. “Again, he understands the psychology of the kids. Just the way he deals with his kids I think is the key. They play their tail off for Dabo Swinney.”