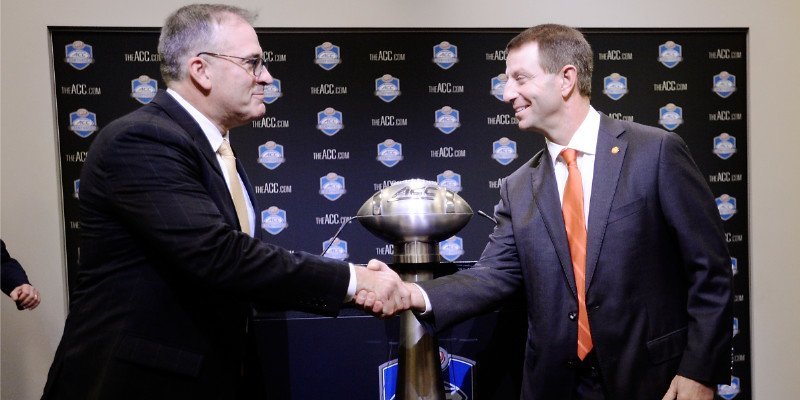 Narduzzi says three is a talent gap between Clemson and the rest of the ACC (Photo by Sara D. Davis, the ACC)

A win on Saturday would give Clemson its fourth consecutive ACC title and make the Tigers the first team in the conference’s 66-season history to win four consecutive outright titles. Bobby Bowden’s Florida State squads earned at least a share of the ACC title in nine straight seasons across the 1992-2000 campaigns but never earned four outright titles in a row.

Narduzzi says there is a gap between Clemson and the rest of the conference.

“I think there is a gap. They're the benchmark of ACC football,” Narduzzi said during his press conference at Bank of America Stadium Friday. “I think there's a lot of great teams in the ACC. Dabo has done an incredible job. I have a lot of respect for him, what he's done, how he's done it. He's done it the right way. I think he's a standup guy.

“I think if you look at most conferences, it's the same way. There's always one or two teams that are really controlling the conference. Look at Alabama, look at Clemson, really Ohio State, Michigan State the last couple of years. You would think they've been there.”

“He has a great personality about him. He's a businessman. Like I said, I couldn't say better things about Dabo Swinney. They're just a talented football team. I think everybody has to coach. Dabo does a tremendous job, period. He's got a great staff, continuity on his staff, great leadership I'm sure with their president on down. He's got everything he needs to be a champion.”

He then said he expects the crowd to be mostly Orange.

“Yeah, I think it will be a big Clemson crowd. I guarantee that, just being a drive up the road. But it's going to be important, a fast start,” he said. “Again, we can have a slow start and still get it done. I never sit there and say, Guys, we need to get a fast start or watch out.

“We've done that all year. We were down at Wake Forest a couple of weeks ago, came back and won that game. Done it, doesn't matter. There's going to be adversity in that game, ups and downs. We don't care how it starts, how it finishes, we're going to keep fighting for 60 minutes.”

Can the Panthers pull the upset?

“Hey, the game is played. I think anybody can beat anybody on any given day, period. We all know that. We can take all the measurables,” Narduzzi said. “We can talk about guys that are this tall and this tall, but the one thing I don't think you can really measure is what's inside that heart. Our kids are going to play with a lot of heart, with a lot of effort. Pittsburgh, we have a lot of toughness there, that's what we expect to get out of our football team.

“I make no guarantees (smiling). Got that?”