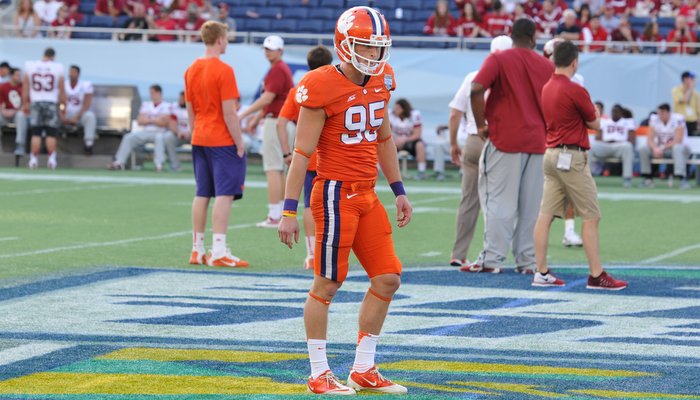 Clemson’s junior punter signed with an agent Tuesday, effectively ending his Clemson career. The native of Concord, N.C. entered Clemson in 2012 and had one more year of eligibility.

Pinion, who played as a first-year freshman in 2012, served as Clemson’s punter and handled kickoffs each of the last two seasons and was a big reason the Tigers were strong on special teams during that time. With the return of Ammon Lakip

Alex Spence
Fr. Kicker
#47 6-2, 190
Florence, SC
View Full Profile – Clemson’s special teams figured to be one of the best in the conference next season.

However, Pinion said the timing was right for him to go ahead and declare for the draft.

“My family is one hundred one percent on board with it,” Pinion told TigerNet shortly after the announcement. “There really aren’t a lot of good kickers coming out this year, and I just felt like this was the best time for me to accomplish my dream of playing in the NFL. I love Clemson and I thank the coaches and all of the fans for a wonderful time, but I just felt like this was the best time to see what I can do on the next level. I’ve talked to a lot of people, but I’ve known for a while that this is what I wanted to do.”

Pinion averaged 42.6 yards per punt, fifth-best in the ACC, in 2014. He had 28 punts inside the 20 to lead the ACC and break his own school record for a season. He also had 17 punts of 50+ yards, tied for third-most in the ACC, and just two touchbacks.

Pinion finished the 2014 season with a net punting average of 40.3, sixth-best in Tiger history and the second-best mark by a Tiger since 1984. He had five punts for a 43.4-yard average in his final game, the Tigers' 40-6 victory over Oklahoma in the Russell Athletic Bowl.

However, punters declaring early for the draft is a rarity – LSU’s Brad Wing declared early in 2013 and went undrafted. Wing spent the 2013 season as a member of the Philadelphia Eagles practice squad but hooked up with the Pittsburgh Steelers this season. Wing appeared in 16 games with Pittsburgh and averaged 43.7 yards per punt on 61 punts.

Pinion told TigerNet that he didn’t submit his draft paperwork in December before the bowl, mainly because he already had his mind made up he was going to turn professional. He also says that he thinks getting drafted is still a possibility, but he is willing to try the free agent route.

“I would have turned pro even if I knew for certain,” Pinion said. “I feel like I can do a lot of things – I can kickoff, I can punt and I can kick field goals. But I do think the NFL Draft is still a possibility. We will just wait and see, and if I have to go in as a free agent that’s what I will do.”

So who will punt for Clemson next season? Maybe Andy Teasdall, who hit a 44-yarder in relief of Pinion against the Sooners in the Russell Athletic Bowl.

Andy Teasdall
RS So. Punter
#95 5-11, 185
Winston-Salem, NC
View Full Profile can do a great job,” Pinion said. “It’s up to him and the coaches, and if the coaches can’t bring someone in this year then Andy can do the job. Any punter would be crazy to not want to come here, but if they don’t get someone this season then Andy will do a good job. It’s just up to him and the coaches and if he wants it bad enough and will put the work in.”

Pinion said two memories stand out to him from his Clemson career.

“The punt in the Orange Bowl is one,” he said. “And then the onside kick attempt this year against South Carolina. That was awesome, and I will never forget that.”

It's official! Can't wait to work with MGC Sports!