The offseason in college football used to be unbearably long, boring and lacking in any kind of news.

Well, it’s still long and boring, but thanks to social media and kids who don’t know when to be quiet, it’s at least a little more entertaining than it used to be.

College football is littered with goofballs and nut cases whose weirdness and eccentricities are highlighted by an active social media generation. Heck, you jump naked on a shark for a little fun and twenty minutes later they are laughing at you in Russia.

People have inquired into where I’ve been since the end of football season and if I’ve found gainful employment. I have – a friend of mine who has smarts and graduated from Clemson wrote this exceptional program where we can see what schools are offering what recruits.

He went down to Columbia and made a presentation to Will Muschamp and his staff, who took a day off from teaching their offensive linemen to block each other (it creates confusion they said) to work on recruiting.

The program is written to watch the internet for offers to go out from such storied programs as Georgia St, Tulane, Buffalo, Wyoming and Texas State. Once the offer goes out to said 0-star or 1-star player, an alert is immediately sent to the South Carolina coaches’ emails. They then offer said kid, tweeting nonsense about “Spurs Up”, which means the chicken died.

To date, we are making a lot of money off the system and the Gamecocks, who are also working on “how to ride an opponent into the endzone without falling off.”

But let’s take a look at the offseason oddities.

Jim McElwain “bonds with a shark”

Florida’s head coach made headlines when a picture surfaced of a man that favors McElwain mounting a shark while nude. He immediately shot down rumors that is was him, but we’ve been working to confirm it was indeed the head Gator.

One Clemson website confirmed through their Florida sources that it was McElwain, who was using the picture as a recruiting tool to get Tajh Boyd to transfer to Maryland and to force Clemson to move to the Big 12.

It didn’t work, and my only complaint is that he should have bought the shark lunch first.

In case you missed it, Florida Atlantic’s flaky head coach offered a kid last week who is, I think, seven.

Kiffin is known as a good football coach when you can keep him focused, but that’s hard to do with so many bright and shiny objects laying around, like Arkansas volleyball players (right Bobby Petrino?)

Kiffen, who likely won’t have a job when the kid finally comes of age, made the offer simply garner attention and it worked. Of course, South Carolina offered shortly after, tweeting out that Florida Atlantic is “not much better than us, if at all.”

We will keep our own Florida sources watching this one.

The recruit who wasn’t

In late May, an odd recruiting story came across our desk about a junior college prospect that may or may even not exist named Unique Brissett. The “receiver” from Globe Institute of Technology tweeted out his list of Top 8, and he had narrowed his choices down to some good programs including Miami, Michigan, Michigan State, Penn State and Kentucky.

There were some impressive pictures and a highlight reel tape, but they weren’t of Brissett but of another prospect. However, the name made it into our database, and Muschamp tweeted out an offer to Brissett almost immediately.

Unfortunately, Man’Tei Teo’s girlfriend called the football office to let everyone know it had been a prank, and they tweeted out “never again.” 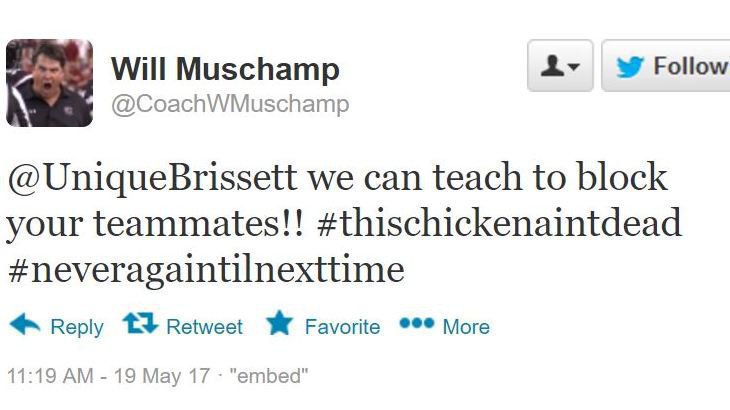 The offer goes out

Never Again. Until next time.

South Carolina quarterback Jake Bentley has been the subject of much ridicule since losing 56-7 to Clemson at the end of last season. The Gamecocks simply weren’t competitive in the rivalry game – and might not be for a while – but the youngster is promising rivalry wins and national championships and giving his thoughts about how Clemson and South Carolina were equal in every aspect except the scoreboard.

He also posted a picture of himself, laying on the turf in Death Valley with the hashtag Never Again. Then later he says this:

“We just didn’t play well that week,” Bentley said. “That’s our big quote going into this year. We felt we got outworked. So our big thing is never again we will be outworked. Never again will be out-competed in a game like that. It all stems from that game. Because at the end of the game, everyone knew that they weren’t that much better than us or better than us at all.”

For those that missed it, Clemson could have scored 100 or more, but head coach Dabo Swinney called off his dogs early. Bentley was removed from the game while he could still walk, and the rest is history.

But, we used our Florida sources to find this gem from a history paper Bentley wrote this spring about the football game between Cumberland and Georgia Tech in 1916, a game Tech won 222-0.

“Cumberland just didn’t play well that week. That was their big quote after that game. They felt like they got outworked, and they said never again will be they be outworked. Never again would they visit Atlanta and not stop at The Varsity for a chili cheeseburger. Never again would they be out-competed. It all stems from that game. Because at the end of the game, everyone knew that Georgia Tech wasn’t that much better than Cumberland. Not much better at all.”