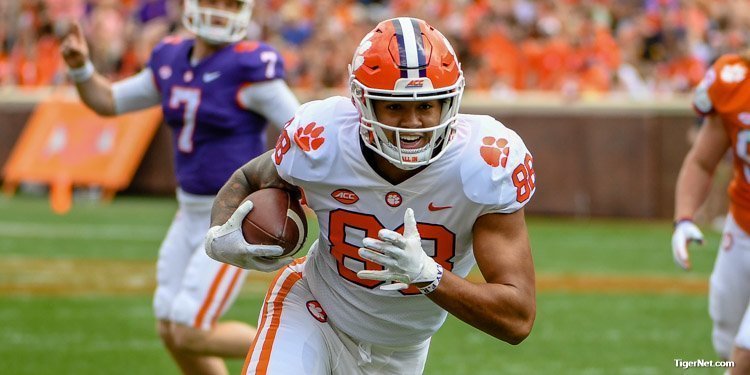 Galloway, the Tigers’ tight end, was suspended for the season by the NCAA.

CLEMSON – The conversation with Braden Galloway was one of the most difficult that tight ends coach Danny Pearman has had.

Galloway, the Tigers’ tight end, was suspended for the season by the NCAA after a trace amount of ostarine was found in his system after a December drug test.

Pearman said Galloway will still play an important role for the Tigers this season.

“I've had a lot of contact with Braden. Obviously, disappointed is probably an understatement but that's the hand he's dealt,” Pearman said. “You can sit here and wallow in that all you want but that's not going to get him any better or get us any better. He's got to take what he's been dealt and deal with it. We look forward to getting him back eligible on the team from that standpoint but he's going to be a vital part of our team this year. We've got to treat that like it's an injury from our standpoint and from a prep standpoint.

“He's got to stay engaged. He's got to do his part. He may be the best scout team tight end out there. He may need to do whatever he can to contribute to our football this year and he's taken on that. He's worked extremely hard in the weight room to help himself and that's one area as a freshman that he needed as much or more than anything. In the end, it may end up being a blessing for him and he just doesn't know it yet.”

The conversation between the two wasn’t easy.

“I let him vent and then I go back with him. It's like anything - you're dealing with a young man who's had a bad situation and you've got to deal with it,” Pearman said. “Obviously, it's not easy but it's part of the growing process and he's doing a good job as far as that goes. I've been more than encouraged. I've got a good relationship with him. I check on him and it's not always as bad as it seems and it's not always as good as it seems. Through this whole process, you may look up at the end of it and it may be the best thing to happen for you because I was able to do this and lift and develop my body.

“He may look back on it in five years and that's what he's got to do. It's been interesting to watch Braden. He's had to take on another role. Sometimes it isn't fair, but how do you deal with it? Do you cry over spilled milk or woe is me or do you wallow in pity and self-pity? That hasn't been his style at all. He's not necessarily embraced it but he's learning to deal with it every day and making the best of it.”

Pearman has thrown all of his support behind Galloway.

“I guess when I first heard it, I was obviously frustrated. It's just like you're a parent. You're dealing with a situation where you have a player or a child that you want to stand up for what's right and it didn't go his way,” Pearman said. “You can argue until you're blue in the face about the system and whether it was fair or not fair and all you're going to do is go round and round. What could he do about it? You don't know. You let him vent some and you can vent some but at the end of the day you have a student-athlete who is going through a tough deal and you have to embrace him, love him and let him vent to some of that and then you have to get a plan with him. He knows you're in the fox hole with him.”