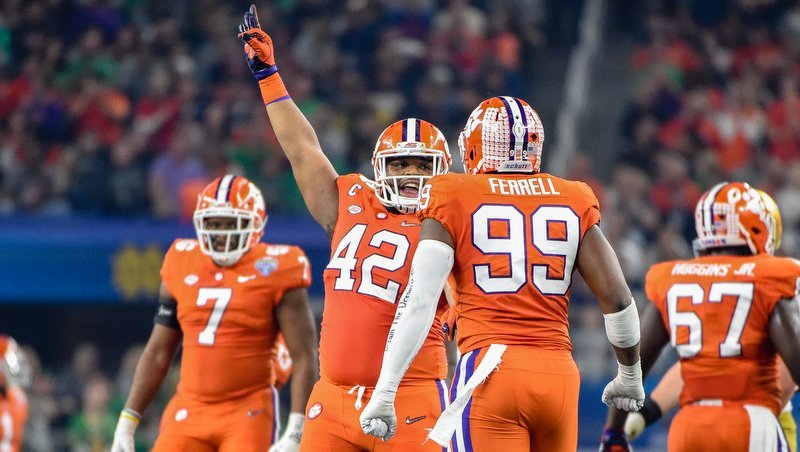 Ferrell, Wilkins, and Bryant want to finish the season with a win

The Tigers defeated Notre Dame 30-3 Saturday to clinch a spot in the National Championship Game next week against Alabama. Clemson has a 14-0 record and has already won the season opener, clinched a state championship, an ACC Atlantic Division title, an ACC Championship and won the bowl game.

There is one more goal left – win the closer.

The veteran members of Clemson’s defense shared the smiles and high-fives from their teammates in the locker room following the game, but from those guys there was a grim resolve. The message? This is great, but there is one more, a message that defensive end Austin Bryant thinks will take care of itself this week.

“I think our culture will take care of that. It's always about what's next,” Bryant said. “The next thing on our radar is winning the National Championship. So, I don't think we have to say much. I think our culture kind of permeates that each and every day in how we prepare and how we go about things on a daily basis.”

Bryant said the Tigers have yet to play their best game.

Clelin Ferrell said this season isn’t about a win in the Cotton Bowl – it’s about finishing.

“It's sunk in. I am ready to go and get back to work,” Ferrell said. “It's one more game to accomplish our final goal which is to win the closer. We've hit every goal we wanted to hit so far. It's all about finishing. It's not about how you start and how you played midway through the season. It's about how you finish and we have to go out there and do that. We have unfinished business.”

Ferrell said the Tigers’ mindset is to go out there and take it.

“For sure. The confidence comes through preparation. We understand what we have here. We know how to prepare and we know how to work,” Ferrell said. “We have the talent to beat anybody. The confidence is at an all-time high but we understand we have to come out and play well, regardless of any of that. Any time you are in a championship game like this, no one is just going to give you the game. You have to go out there and take it. We have to prepare and get back to work and play our best game.”

Linebacker Kendall Joseph said the trip to California later this week isn’t about a vacation – it’s about winning.

“This is awesome. A dream come true. We have put a lot of work into it and we definitely deserve it,” Joseph said. “We have one more game. We are trying to go 15-0 and win the National Championship. We aren't going out to California to have a little vacation or a little trip, we are going to win and finish our careers strong.”