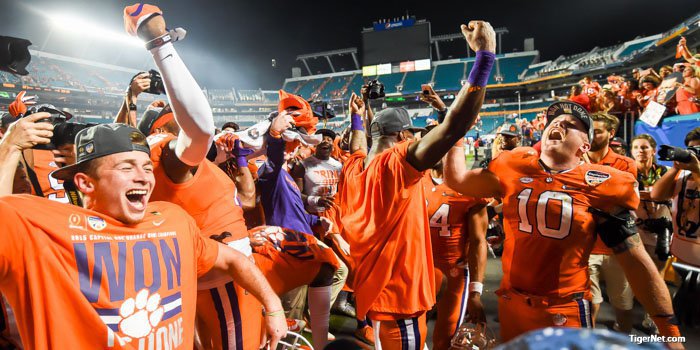 Dabo Swinney uses the phrase a lot, so much so that there is probably a T-shirt already printed with the slogan: “We’re built for this.”

That “this” is the big stage of college football, and the Tigers proved again this year they are indeed built for big games and the big stage.

That started from the very first game this season. While most teams lined up sure wins in their opener, Clemson headed to Auburn and had to work hard for the win. In fact, the Tigers had to work harder than most people expected, so surely there was something wrong with them, right?

Actually, Auburn turned out to be a better team than most expected, and that was just a good win on Clemson’s schedule. There were a lot of those.

Clemson is 12-1, and 10 of the Tigers’ wins came against teams that are headed to bowl games – with the lone exceptions being South Carolina State and Syracuse. The 12 victories include big-stage wins over Louisville and Florida State, a dominant showing against South Carolina and a win over Virginia Tech for the Tigers’ second straight ACC championship.

Clemson’s only loss came to Pittsburgh, which is the Tigers’ 11th opponent headed to a bowl game.

Clemson is battled-tested, and it will be ready for yet another big-time game coming up next on the schedule: a College Football Playoff semifinal against Ohio State in the Fiesta Bowl. It is a showcase game, for sure, but the Tigers likely won’t be overwhelmed by that game or the situation.

They showed that last year with their win over Oklahoma and a showdown, albeit a loss, with Alabama in the national title game. Clemson finished 3-1 last year against top-10 teams as Swinney became the second Clemson head coach (joining Danny Ford) to beat three top-10 teams in one season.

The Tigers added another such win over Louisville in October in a game that will be in the discussion for game of the year. Yet here are the Tigers listed as underdogs against Ohio State in the semifinals.

Granted, I don’t gamble on sports, and I don’t pay much attention to spreads or gambling lines on games, but it’s interesting that Clemson continues to be an underdog in these types of games.

Clemson is 5-4 in bowl games since Swinney took over as head coach, including the 2009 Gator Bowl loss to Nebraska when he was still the interim head coach. After a win over Kentucky in the Music City Bowl, Clemson lost to South Florida and West Virginia (yes, the Tigers really did give up 70 points).

The past five bowl games have come against some of college football’s elite programs, and time and time again, Clemson proved it belonged in those games. That started with a thrilling 25-24 win over LSU in the 2012 Chick-fil-A Bowl, which was followed by an exciting 40-35 win over Ohio State in the 2014 Orange Bowl.

That’s what Clemson fans should expect in the playoffs this season. Who knows if the Tigers will beat the Buckeyes and then win a national title, or if they’ll lose in the championship game or even lose to the Buckeyes. Ohio State and Washington are really good teams, and Alabama could be an all-time great, so anything really could happen.

The path to a championship won’t be easy, for sure, but Swinney has a program that is built for just that kind of test.