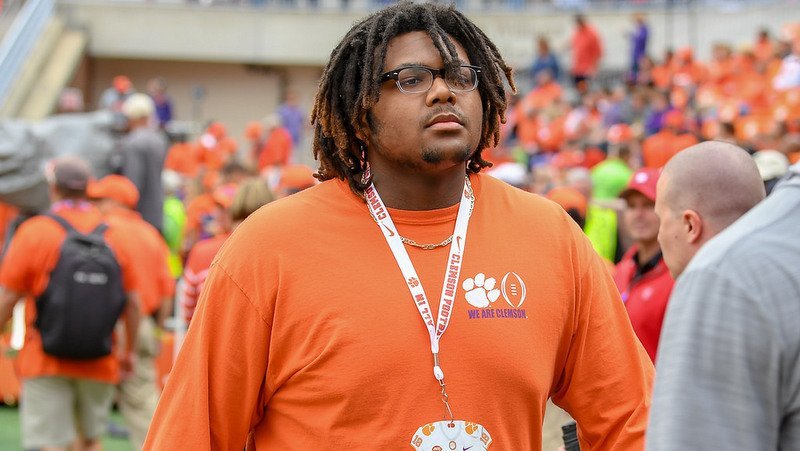 Mitchell Mayes is shown here on a visit last season

The offensive line is a priority for the Clemson coaching staff in the 2020 recruiting cycle, and the Tigers already have three commits on board. The staff hosted those three and top high-priority targets at last weekend’s elite junior day, including 4-star tackle prospect Mitchell Mayes of Raleigh (NC) Leesville Road.

Mayes enjoyed Swinney’s presentation about what it takes to be a Tiger.

“I really appreciated how Coach Swinney showed that faith and family are a big part of Clemson football,” Mayes said. “You can have faith and still be a good football player. There weren't any bums there - they are all great players. That was one box that was checked. To be a part of Clemson football you have to be an all-around great person. My mother enjoyed the visit. She really liked the idea that faith and family come first at Clemson.”

“He always tells me he loves me and wants me at Clemson. He knows that I could do well with him. They never promise playing time to any player, and they let that be known,” he said. “But he tells me that I can earn playing time in my freshman year. It all depends on however hard I work. He always loves my family and is a good dude to us.”

Next up for Mayes? A full slate of visits as he tries to figure out which school leads.

“I have several visits planned. Next weekend I will be at Tennessee and then after that, I will go to Wake Forest and Duke and then UNC,” he said. “I would say all my schools are equal right now. All my schools are open. No school is ahead of the other right now. I don't know when I am going to make a decision - I just want to enjoy the process and let the decision come to me.”