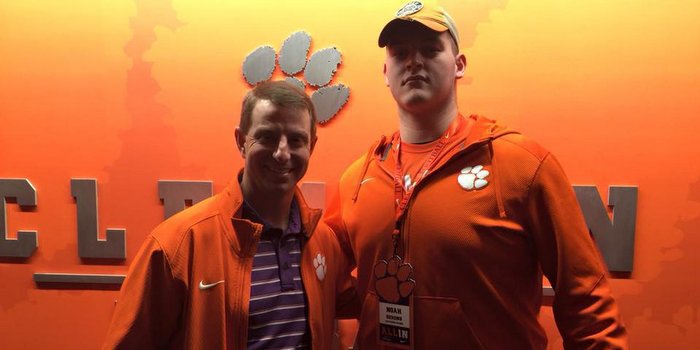 Noah DeHond still has another season of football to play for The Peddie School in Hightstown, N.J., but his heart and soul are already firmly planted in Clemson. Visit his Twitter page, and you'll see the hashtags “#ALLIN” and “#WE2DEEP17.”

A shining star in what already looks to be a stellar 2017 freshman class, DeHond verbally committed to the Tigers in August. Before deciding on Clemson, he fielded offers from Alabama, Arkansas, Louisville, Miami, UNC, South Carolina, Virginia, Virginia Tech and Wisconsin, among others.

And although he was given a chance to stay in the Garden State and play for Rutgers – “they were like my second Big Ten offer” (after Wisconsin) – that notion was a nonstarter: “I don't really want to stay in Jersey any longer than I have to.”

DeHond very nearly committed to Nick Saban and the Crimson Tide – two cousins attended the University of Alabama, and an aunt lives in Birmingham – while his mother helped steer him through the decision-making process.

“I mean, Alabama is just such a good program – so much respect and tradition there. When I visited, I told my mom, 'Why should I not commit here?' ” And she was like, 'Be smart, don't rush it, take your two other trips.' ” (His second trip was to UNC.)

“And then I went and saw Clemson, and it was just different. I know every recruit says it, but like, when people say it's different, it really is. It's hard to describe, but what they've developed over there over the past eight years – unbelievable.”

DeHond said he and the other verbal commits in the 2017 freshman class regularly communicate via an online group chat, and he's looking forward to attending coach Dabo Swinney's camp in mid-June and celebrating his 18th birthday in Tigertown.

“We're bonding really well,” he said. “It's just fantastic. Everyone we're bringing in is just unbelievable.”

Defensive coordinator Brent Venables, offensive line coach Robbie Caldwell and the rest of the coaching staff made him feel right at home during the recruiting process, DeHond said. But he was also attracted to Clemson from an academic standpoint.

“First of all, it's one of the top public schools in the country, and Clemson has a lot of diversity when it comes to what you can major in,” said DeHond, who plans to focus his studies on agricultural engineering. “That's what I'm planning on right now, but I'm not 100 percent set on that.” He also said he has his sights set on early enrollment at Clemson, in January 2017.

Venables foresees him staying at offensive tackle, DeHond said, primarily due to his towering presence. (Though officially listed at 6-foot-7, DeHond says he's actually “6-8 ½ with my cleats on.”)

After attending summer camp at Clemson, DeHond said he'll continue to focus on strength training and gearing up for his final season at The Peddie School, a private institution with a proud gridiron tradition.

“We have a really good strength program here (at Peddie),” he said, adding that his head coach, Chris Malleo, played quarterback and linebacker at Northwestern.

And his goal for his senior year with the Falcons is pretty straightforward: “Dominate. Just dominate. Win a league championship.”

Beyond that, DeHond looks forward to carrying that mindset to Death Valley and becoming a dominant force on Clemson's offensive line. Pointing to the Tigers' string of 10-win seasons and January's national championship game, he said he's excited about helping continue the trajectory.

“They're only going up from here. Some people say you can't get much higher, but that's how it's going.”