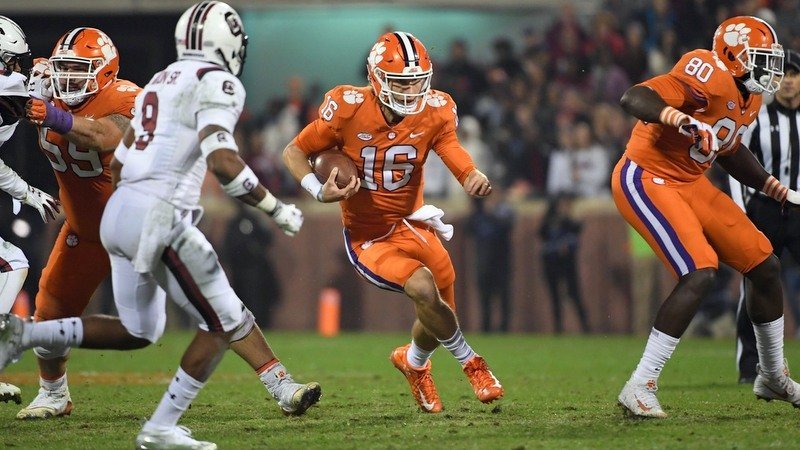 CLEMSON – Former Clemson quarterback Deshaun Watson was known for keeping his composure in the toughest of situations, and that composure helped lead the Tigers to a National Championship two years ago. Trevor Lawrence wants to be the same kind of quiet leader.

Lawrence took over as a starter for the Tigers after four games, and he’s helped guide Clemson to another ACC Atlantic Division title, an ACC Championship and a berth in the College Football Playoff. No. 2 Clemson takes on No. 3 Notre Dame in the Cotton Bowl on December 29th with the winner advancing to the National Championship game against either Oklahoma or Alabama.

Lawrence is looking forward to the opportunity to not only play in the game but play in AT&T Stadium.

“Just excited for the experience really. And how hard we've worked to get to this point,” Lawrence said. “Just to win every game is big, but at this point, you know, there’s a little extra to it. Just to be in the playoff, which is what we've worked for all season. It’s exciting to be at this point and still be playing. That (playing in Jerry’s World) is going to be awesome. I'm excited. Obviously, that's a crazy stadium. It's gonna be an awesome experience. I’m really excited to get to do that with these guys.”

Lawrence said he knows the importance of keeping calm.

Lawrence said he won’t look past Notre Dame and ahead to a possible appearance in the title game.

“It’s like any other game really, it's still just a game. It's important because it's the semifinal and hopefully you win that and go play for the national championship. But you can't play in the national championship until you win this one. So taking it one game at a time is really important. These coaches and everyone here do a great job of keeping us all level-headed and we have really good leaders here.

“We’ve played in some big games this year already, so I think we're prepared. I mean we know how to win close games if we have to. We've had some tests and it's flown by, but it also feels like I've been here for a long time. It's been an awesome experience. I’ve been through a lot already this year, but I wouldn't want to be anywhere else.”

He then said that playing in big games is one of the reasons he chose to attend Clemson.

“I want to play for a program that obviously competes for national championships. That was, I wouldn't say that's my number one goal as far as where I wanted to go, but that was definitely high on my list and I'm obviously at a place here that does that,” Lawrence said. “And then I was at the Army game watching this game last year when they played Alabama and it was cool to see them there. But also I kind of envisioned next year when I'm there, having that same opportunity.”

In the meantime, he isn’t feeling any pressure.

“The way you take pressure off of the moment is preparing beforehand,” Lawrence said. “We've done that and we're still going to continue to do that. Obviously, we’ve got a little bit of time before we play. That’s how you lessen that pressure in the moment is being ready and preparing before. We do a great job with that every week.”