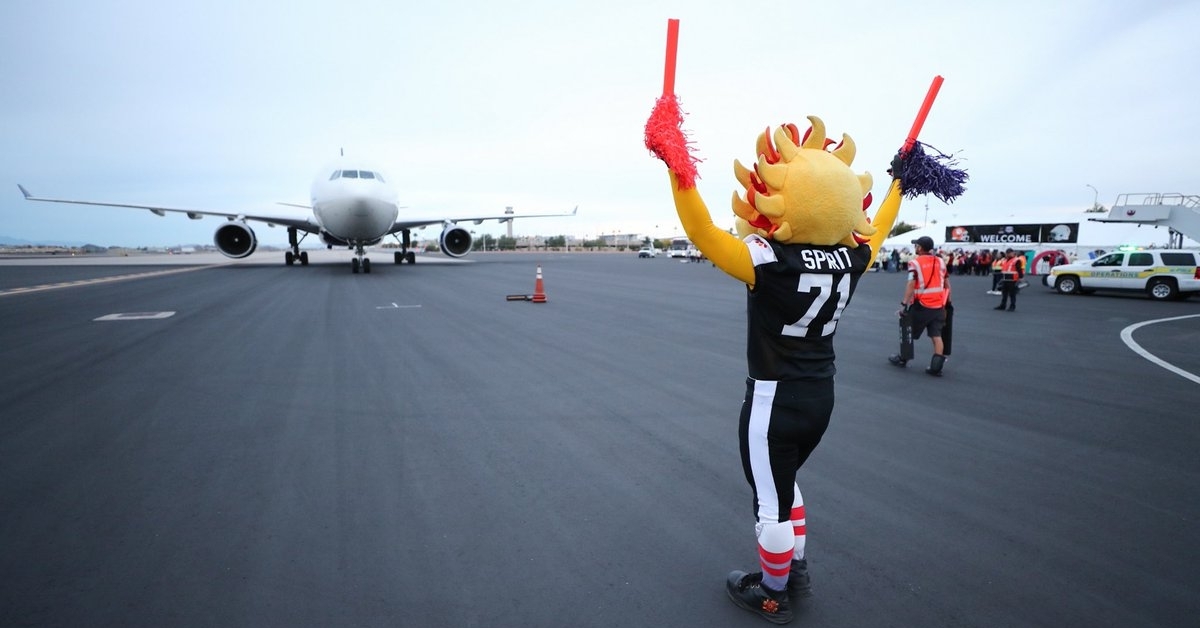 Clemson has arrived in the desert.

No. 3 Clemson flew into the Phoenix Sky Harbor Airport late Sunday afternoon as the Tigers prepare to play Ohio State in next Saturday’s Fiesta Bowl.

Saturday's matchup with second-ranked Ohio State will be the fourth meeting between the two teams, all in bowl contests, with Clemson winning all three games. In their last meeting, the Tigers posted a 31-0 victory over the Buckeyes in the 2016 CFP Playoff Semifinal at the PlayStation Fiesta Bowl en route to taking the national title.

“We're just happy to be here, just blessed to have the type of season that we had,” head coach Dabo Swinney said as his team exited the tarmac. “Obviously, you got to get picked to be here. Everybody is saying, Thank you for being here. I'm like, Shoot, thank you for having us because you got to get picked to come here. We didn't really get a choice. We're just thankful to be out here in Arizona. We came out here, I guess, in '16. We are a very young team.

“And the majority of our team has not been here, just our fourth-year juniors and true seniors. But most of our team has not been to Arizona. So it's a really great trip, something we're really excited about and just very appreciative of all the hospitality. I was out here as a player way back in '90 as well. Just great memories, great experiences, the hospitality. Looking forward to a great week and an incredible matchup with an awesome team in Ohio State. So should be exciting for everybody.”

“What I remember most, I was a young man, so I was kind of nervous. I didn't really know what to expect. I was just kind of thrown into it,” Anchrum said. “So I remember the atmosphere was very business-like. But we also knew how to have fun, and he kept us engaged throughout the whole bowl prep. It was a little different. We had more time. I remember the level of competition being high, not only in the game, but what prepared us the most was the level of competition in the practice, and how we did sharpen iron-on-iron.

“And that kind of edge that those older guys brought that taught us, that we can carry on to the younger generations that, Hey, it's always game time. We don't just get up for games like this. We treat games like this like we do Week 6, Week 7. The preparation may be different, but we keep the formula for excellence. Keeping that same formula through now similar to how we were last time.”

This year’s schedule has been compressed but Swinney said he feels like his team has adjusted to the schedule.

“It's been good. I just tried to rely on past experience, but it was very different. It was actually something I put a lot of thought into really last May,” Swinney said. “I do a calendar every year, kind of a 13-month calendar, July through the next August. And I always plan -- I just plan like we're going to win it all. And then if we don't get there, we'll adjust. But I just kind of plan that way. And so I actually had to think a lot about it. In fact, I questioned Mike Dooley, my operations guy, when we were first going through the calendar. I'm like, Wait a minute, this can't be right. I was into December and this was last May. I was going, This isn't right, but he was right. I argued with him a little while. He was right; I was wrong. We really lost a week this year. It was a strange deal because the championship games were a week later. So it's very compressed. In past years, we have been able to play the championship game, and basically give our players off a week and a half.

“And then we would start bowl prep and have another week and a half in town before we would break for Christmas. So just different. Lost a week, but it's been great. These guys, we sat down and actually talked about it with our seniors, what I felt like the best thing to do. Because you do have to give them some time off. It's a long season when you play 13 games and two open dates. So there's a lot of practice. These guys have been going since July 31st. So having that balance of giving them a little bit of a break and also getting them physically prepared for what they're going to see. Because in the game of football, it doesn't take long to kind of lose your edge, if you will.”

The Tigers have been in the College Football Playoff each of the last five seasons and Swinney said the Tigers will rely on that experience.

“I think that certainly experience is a great teacher, but it's a new team. Like I said, I've got very few that have been out here. We don't have a big senior class,” Swinney said. “And that's the only group that's been here. Most of these guys, it's a new experience for them. But we have been in a lot of big games. All of our true juniors and true sophomores have played in big games. As Tremayne [Anchrum] said, we really treat every game as a big game. I mean, we really do. I think that's why we've been so consistent, is we try to put our best foot forward and we try to play Clemson every week.

“So it's exciting. This is a little different in that obviously you're away and it's a bowl site and different logistics and things like that. So our experience hopefully will help us just kind of navigate that. But at the end of the day, man, we got a routine that we believe in and we'll stick to it but at the same time, also, enjoy the week and participating in all the things that are available to us.”