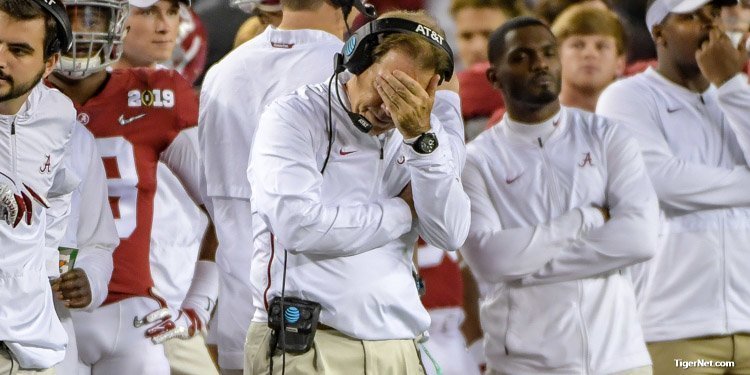 SANTA CLARA, CA – Trailing 31-16 early in the third quarter of Monday’s College Football Playoff National Championship, Alabama head coach Nick Saban made an uncharacteristically desperate move. He went for a fake field goal on fourth down. The play was stuffed, and the message was clear.

Saban knew his team wasn’t good enough to beat Clemson. Not on this night. Not in this stadium. Not this season. The move told his players he didn’t think his defense could stop the Clemson offense, and it told the rest of the nation that there might be a new king in college football.

For 60 minutes Monday night, Clemson out-hit, out-played, and out-coached the Crimson Tide. With the win, the Tigers have beaten Alabama two out of the last three seasons in the National Championship Game, with each team owning two titles during the current College Football Playoff era.

Dabo Swinney won his second title and joins Saban as the only current coaches with more than one national title. Ohio St.’s Urban Meyer was the only other coach but retired at the end of the season.

Saban told the media after the game that the Crimson Tide had several issues against the Tigers.

“I don't think that one game necessarily defines who you are, and that's certainly what I'd like for our players to know. I think you learn a lot from experiences like this,” Saban said. “We certainly didn't play very well tonight, and we had some issues. We couldn't get off the field on third down, we gave up a couple big time explosive plays on third down, third down and 13, third down and 9.

“We had plenty of opportunities to score offensively, have the ball at the 1-yard line, get a penalty, end up kicking a field goal, have it down there a couple more times, do a fake field goal and go for it on fourth down and don't make it, get stopped on the goal line and 1-yard line another time. Got to congratulate Clemson. They did a very, very good job. Their quarterback is really good, their skill players are really good. We actually stopped the run pretty well and created enough third-down situations, we just couldn't get off the field on third down, couldn't capitalize on our opportunities that we had on offense.”

Quarterback Tua Tagovailoa said it wasn’t as much the Clemson defense making plays as Alabama failing to make plays.

“I don't think it was anything that they were doing that stopped us,” he said. “That was totally a bad decision. It was a poor decision on my part. I just think we came out, and we were killing ourselves. We shot ourselves in the foot by me throwing that interception for a touchdown, and then not finishing drives the way we wanted to. Just didn't go the way we wanted to.

“We just weren't executing what we were -- what the plays were. We just didn't punch it in. That's basically all it was.”

Saban was asked about the mistakes made by Alabama and said that the Tigers should receive credit for playing well.

“Well, you know, first of all, you've got to give Clemson a little bit of credit. They have a really good team,” Saban said. “I think the responsibility for us not playing well really starts with me. You know, we obviously didn't go out there and they did do some things that we weren't prepared for, but you always expect that -- a couple bunch passes that Oklahoma ran and some other people that we had to make adjustment to at halftime. But I thought the players prepared well for this game, and I think that they just got out-performed.”

Saban then said the Alabama coaching staff has to take ownership of the loss.

“It wasn't like we just didn't cover a guy. I mean, we tried to cover No. 8. He caught the ball, made a big play. We were in three-deep zone when No. 5 catches a ball and runs 50 yards, 60 yards for a touchdown, guy doesn't play the deep third properly,” he said. “So you know, those responsibilities start with me, our staff and all the coaches who try to get these guys ready, and when we don't play well, I feel like that's a reflection on the job that we did, the job that I did.

“You know, but Clemson did a really, really good job. I know the score. There's a lot of good things that our team did out there today, especially on offense, and we did stop the run on defense, but we couldn't get off the field on third down. I mean, sometimes we just didn't get them covered. A couple times we made some errors on things that they did that we had not practiced that were difficult, and they're pretty good.”