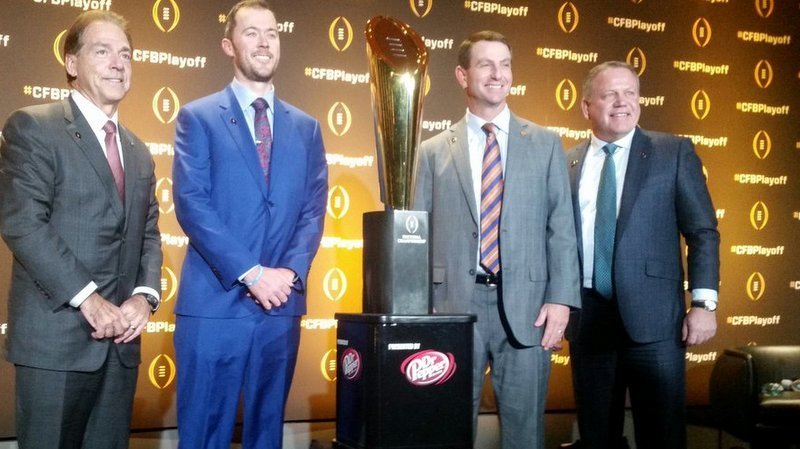 ATLANTA, GA – Alabama is making a fifth consecutive appearance in the College Football Playoff and is, without a doubt, college football’s current dynasty. Much of Alabama’s success is due to head coach Nick Saban, who knows not only what it takes to reach the top but to stay there.

No. 1 Alabama faces No. 4 Oklahoma in the Orange Bowl later this month while No. 2 Clemson takes on No. 3 Notre Dame in the Cotton Bowl. If the Tigers and Tide both win, it would mean facing each other in the Playoff for a fourth straight year. Alabama has won two meetings while Clemson has won one of those.

The coaches appeared together Thursday night at the ESPN Awards Show at the College Football Hall of Fame in Atlanta, and Saban was asked what makes Clemson successful.

“Well, I think Clemson has got an outstanding program, an outstanding team,” Saban said. “I think Dabo does a really, really good job on a consistent basis. They have good players, but their players really play well. They're well-coached. They don't make a lot of mistakes. They execute well. It's a difficult preparation when you have to play against them. And I think they've been one of the most consistent, dominant teams throughout this entire season.”

Saban then said the fact that the Tigers are able to be at the top year after year is a testament to the culture Swinney has built at Clemson.

“You know, I always say there's a lot of books written about how to be successful. There's not many written on how to stay successful,” Saban said. “I have a tremendous amount of respect for the fact that they've been able to do it on a consistent basis and be here over and over and over and over and play at that high level all the time and not have any complacency in the program. Their players are continuing to try to play to a high level and be the best players that they can be, and I think that's a tribute to his coaches and their staff and himself.”

Notre Dame head coach Brian Kelly said Clemson knows how to win football games, and agreed with Saban that it comes down to the culture Swinney has installed in Tiger Town.

“Well, obviously when you talk about playing an opponent, it's the ability to close games out, the ability to know how to win, and that's Clemson. They know how to win football games. They've been winning,” Kelly said. “I think everybody that's up here has developed and built a winning culture within their football team. You can't pin that on any one particular player. That's something that's within the fabric of the football program that's been built over time. So that would be the X factor.”