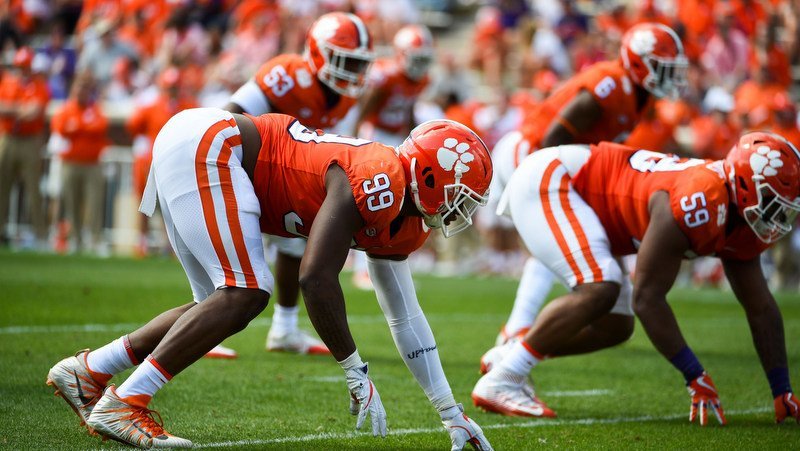 ESPN college football analyst Tom Luginbill spent time on the field during Saturday’s spring game at Clemson, and he got to witness Christian Wilkins, Clelin Ferrell, and Austin Bryant heading his way with bad intentions.

What is like to see three members of Clemson’s Fearsome Foursome up close and personal?

“Frightening. Here’s the thing about it – you have to credit Brent Venables with it too – it’s one thing to have great players that can beat you one-on-one, but then when you start adding stunts and twists and WILL or free safety pressure packages and all of these different things, you’ve added an element of confusion on top of superior athleticism,” Luginbill said. “They are just so difficult to handle. If you’re not as buttoned up or as talented as anybody in the country along the offensive line – Alabama or Ohio State, I don’t care who you are – Clemson can really take advantage of you. Clemson is loaded, there’s no doubt about it. Dexter Lawrence didn’t play and if you add him to the mix, now you’re causing real problems.”

Clemson will need that defense early in the season.

“Considering, you’ve got to go to Texas A&M on September 8th and you’re going to be in a hostile environment, the defense is going to be more important,” he said. “You’re going to need your defense to get some three-and-outs and get you the football back, especially if you’re sputtering a little bit on offense.”

Where does Clemson’s current level of defensive talent rank with some of the all-time greats?

“It’s up there with those late 80s, early 90s Miami Hurricane teams. It’s up there with some of the best defensive teams we’ve seen from Alabama over the last 10 years,” Luginbill said. “I would probably make the argument if you take an eight or nine deep rotation from just the front four – excluding the linebackers – by season’s end it could be one of the best groups assembled.

“I’m including in that group two true freshmen in K.J. Henry and Xavier Thomas who are already enrolled. I’m including Albert Huggins. I’m including Josh Belk who is another true freshman who played a lot of snaps on Saturday. He reminds me of a bigger version of Grady Jarrett. We all know Austin Bryant and Christian Wilkins and Clelin Ferrell and all of these guys, but there are other ones who are just starting to get a taste of this thing that could be special as well.”