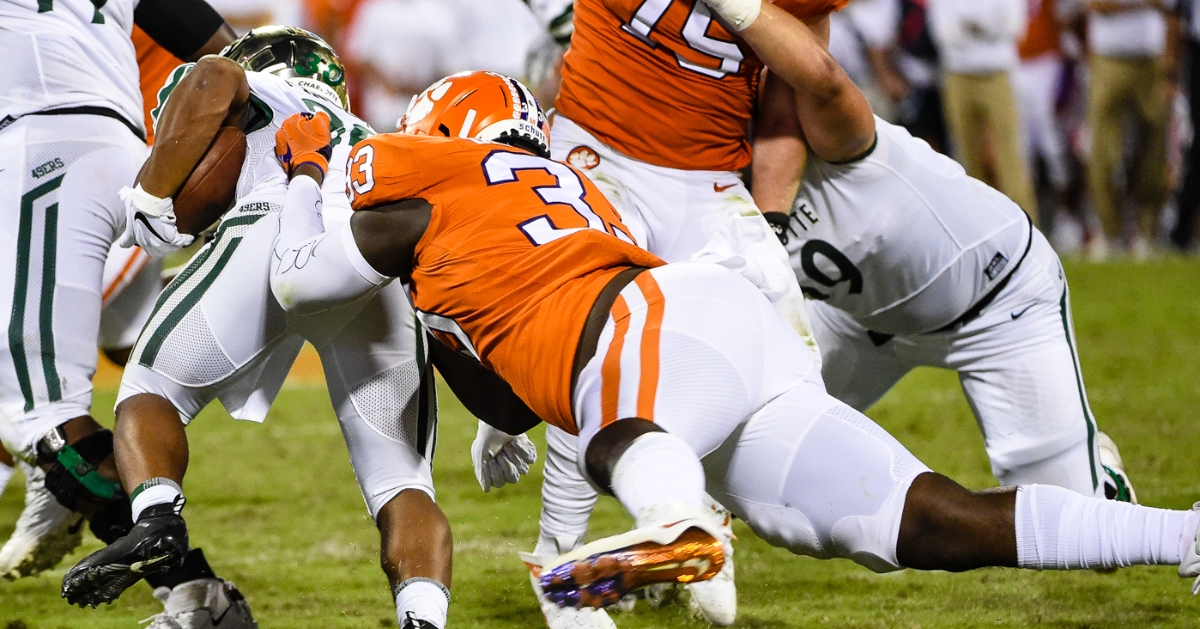 Orhorhoro makes a tackle against Charlotte earlier this season.

CLEMSON – Ruke Orhorhoro made his way to Clemson because the Tigers were the only team able to beat Alabama on the NCAA football video game.

Orhorhoro is a freshman defensive tackle on the Clemson football team who was born in Nigeria and came to the United States when he was nine years old. Orhorhoro played basketball as a youth and in high school but his high school coaches had a different sport in mind for the 6-4, 285-pounder.

“I thought I was going to play basketball for the rest of my life because in eighth grade, I was always the tallest kid, and when 10th grade came, there’s point guards that are my size,” Orhorhoro said Monday. “So, I can’t go to the NBA being a 6-5 power forward or center, so I had to come to the realization that I had to figure out something else to do.”

Orhorhoro made the transition from the hardwood to the gridiron after his sophomore year and found a home on the defensive line.

“It was my 10th-grade year after basketball season. We lost in the state championship, and I was going into my junior year,” Orhorhoro said. “I have six siblings, and my parents are paying for their schools, so I was trying to figure out ways for them not to pay for my school.

“So, my coach just called me after the game – my football coach, Corey Parker – and told me to come try out and play football for him. I didn’t know what I was doing. I just went out there and played a lot of positions actually. They switched me from wide receiver to tight end to linebacker, and I was getting heavier and bigger and bigger and lifting weights. I eventually somehow ended up on the D-line, and it just went up from there.”

During his time in high school, Orhorhoro (like many teenagers) played sports video games and it was on the old NCAA football game where he first learned about Clemson.

“It was really through the NCAA football game because that was the only team that could beat Alabama,” Orhorhoro said. “So, every time my brother would pick Alabama, I would play Clemson.”

“It just happened out of the blue,” Orhorhoro said. “I was getting closer to closing my recruitment. During the summer, I wanted to commit early so I could focus on my senior season. And then when he followed me, that just opened up a lot of doors.”

Venables wanted to offer Orhorhoro but couldn’t figure out how to send a private message.

“It’s kind of a funny story,” he said. “I was just on my phone one day and Coach Venables followed me on Twitter, and I kept trying to follow him, but I guess his Twitter was private, so he didn’t know how to accept it. So, we couldn’t communicate. So, he kind of reached out to me and DMed, gave him my number, and then we talked and they offered me over the phone. Just to show how serious I was, I came down here in like two weeks. Ever since then, it’s just been sky’s the limit.”

Orhorhoro switched from defensive end to tackle once he arrived on campus and put on weight.

“It was completely different,” Orhorhoro said. . “Everything moves fast in there, so I didn’t have time to read my blocks. So, I struggled with reading blocks and all that, but now it’s kind of slowed down to me and now I can see what’s coming.

“Coming here and switching positions to defensive tackle, it hasn’t been that much of a drop-off. It’s still the same to me. He’s coached me very well, taken his time with me. So, the game is slowing down to me and it’s not like I’m running out there with my head cut off and just running around out there with the bright lights.”