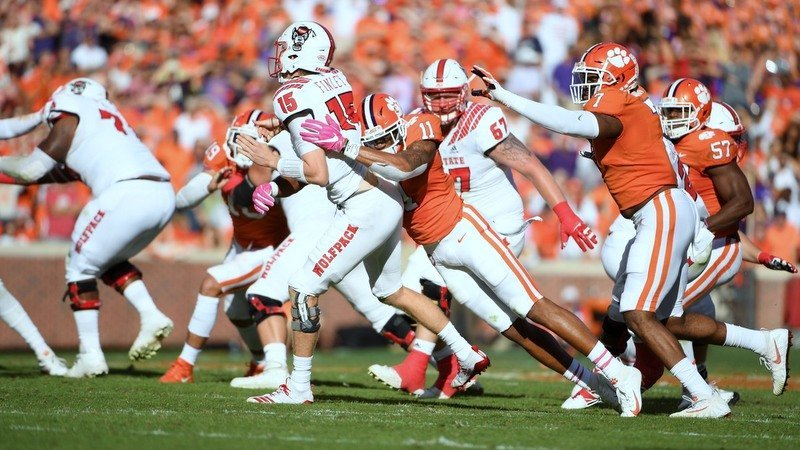 Clemson's defense came out with something to prove Saturday

CLEMSON – After the last two dramatic close calls, N.C. State entered Death Valley with hopes and dreams of finally knocking off No. 3 Clemson.

Unfortunately for the Wolfpack, the Tigers got off to a quick start and knocked N.C. State in the mouth before they ever had a chance to respond.

Wolfpack wide receiver Jakobi Meyers – who had a career day against Clemson in Raleigh last season - said the quick start from Clemson was a shock.

“It was kind of a punch in the mouth. That’s what you want to do when you play any team,” Meyers said after Saturday’s game. “They came out and handled their business and we didn’t. I think we didn’t bring our best game today. When you come into a stadium like this and play a team like this, you’ve got to come with all you’ve got and we didn’t do that like we usually do. It’s very surprising. We practiced hard and did everything hard. When it’s time to play we have to lace them up and go as hard as we can like we do in practice.”

“They played really well and I don’t think we did. We turned the ball over and we didn’t tackle good enough. They have a really good football team and Dabo and his staff do a good job of developing players,” Doeren said. “They protected really well and we didn’t win enough 1-on-1 blocks and their o-line did a good job. It’s definitely a disappointment but there is a lot of football left. It’s a setback for sure, but it doesn’t put us back in the dark ages. We have to roll our sleeves up and fix it. We didn’t play well enough to win on the road. Every offense in the country wants to get in a rhythm and you have to catch the balls that hit you in the hands and we didn’t do that today.”

Meyers said this loss stings a little bit more because of what was at stake for the team, in the Atlantic division and in the ACC.

“Losing period is disappointing. This one hurt a little bit because we felt like we were doing everything we needed to as far as preparing,” Meyers said. “It’s going to hurt regardless no matter how we lose. I don’t think we viewed this game as far as how good we are. We want to win every game. That’s why it hurts us so much because we feel like we had a special team and we still do. We have to go back to the lab and get better.”