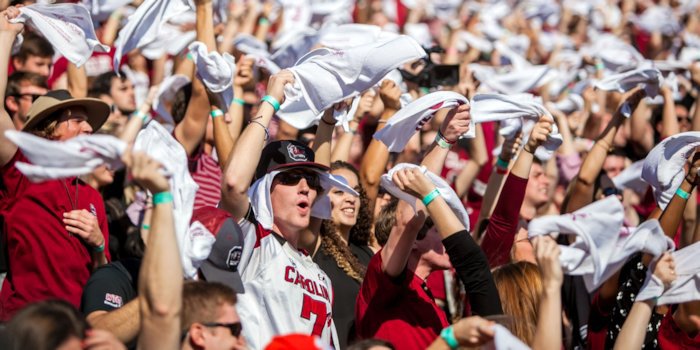 My conference is better than your conference, so there.

That one statement, which sounds petty and like a six-year old trying to win an argument with their five-year old neighbor, is the last bastion of the ignorant and misinformed. And people who cheer for programs that don’t have their own individual successes to brag about.

Prior to Saturday’s kickoff against South Carolina in Williams-Brice Stadium, I was roaming the sidelines as usual, looking for picture opportunities for Twitter and talking to some of the personnel that surround the program. At one point, I heard a roar from the Clemson fans already on hand and turned around to see the Clemson players and coaches begin Victory Walk.

As the players neared the end zone the South Carolina student section began to react, and as is normal began to hurl insults and epithets toward the Clemson players’ direction. It’s part of college football and it’s what makes the game so great. Those passions are why we love it, and if they hadn’t shown derision and distaste for their rival, I would have been disappointed.

However, one poor fellow did disappoint me. As the insults and shouts drifted out of the stands, I turned around to see if I could catch some of the more original insults. This one, down near the front, scrunched up his face and I could tell he was trying his hardest to think of something clever to say before time ran out. Finally, he lifted a fist skyward and screamed, “Get a real conference, you losers!”

Again, the last bastion of the ignorant and misinformed, but I can’t really blame the poor kid. And this isn’t an entire story written with the purpose of trying to make fun of some poor slob who has been spoon fed the ESPN agenda and believes it. The purpose is to point out that college football is now past all of that dominant conference baloney – there are actually a lot of really good teams out there and they span across several conferences. And they beat up on the not-so-good teams, of which there are a lot.

But I didn’t. Because the rest of the country is beginning to see what the rest of us already knew – the SEC isn’t the king anymore. No one is the king because parity reigns. The tired old “get a real conference” or “if they played our schedule” are now concepts that are set up for ridicule by those of us who actually watch college football and realize that teams like Houston and Temple are better than more than one SEC or ACC or PAC 12 team.

The storyline that started last season continued into this season – each conference has a few really good teams up at the top that beat up on the bottom-feeders. And there are a lot of bottom-feeders in each league. I don’t have to name them. You know them. And then there are a lot of teams that are good but not great. They are average. And the teams at the top are really good, but I don’t know that we’ve seen greatness. Not like we’ve seen in the past.

I thought that perhaps the perception had changed after last season, but the voters had eight SEC teams in the Top 25 of both the AP and Coaches Polls prior to the start of the season. Teams that had more holes than a third-grader’s notebook paper snowflake. Teams like Missouri and Arkansas and Auburn. Those teams are nowhere to be seen, and the ACC has Clemson, Florida St. and UNC all trending towards the top. But that doesn’t mean the ACC is the best conference or is better than the SEC, because the reality is it doesn’t matter. Those three teams have survived the gauntlet of the schedule, and they’ve done it because of what their coaches and players have accomplished on the field. Not what their conference has done.

Sure, conference affiliations and strength of schedule will always matter. As it should. But if any program has to ride the coattails of their conference in this day and age it speaks to bigger problems. It’s 2015 after all, and it’s about wins and losses more than it is about your conference. Ask the College Football Playoff committee.

Get a real conference? That needs to be replaced by get a real team and win some games. Then you’ll be speaking my language.