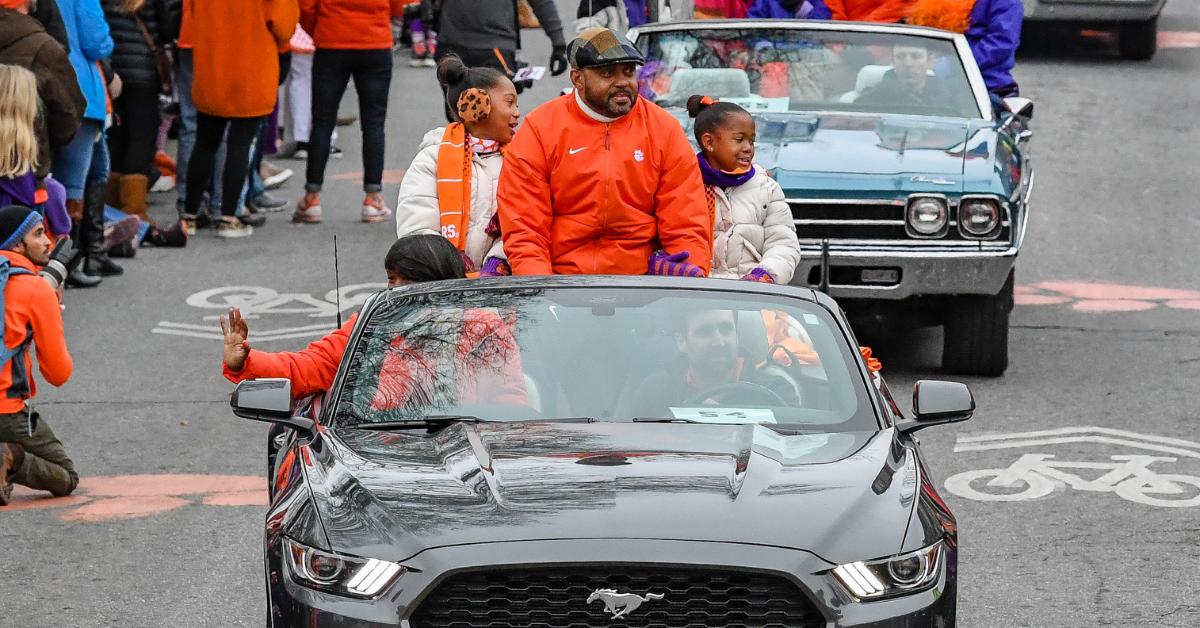 Mike Reed and his family in the National Championship celebration parade

CLEMSON – Why do recruits and their families seek out Clemson? Is it the championships or the winning football program? There’s more to it than that. Cornerbacks coach Mike Reed says they are seeking out the good in the world.

Social media and the local and national newscasts are dominated by the bad in the world. Natural disasters and religious furor and political fights are just a few of the headlines we see each day, which means that people are looking for an alternative in different avenues of their lives.

That is where Clemson fits in, according to Reed.

“When you have the success we're having on and off the field, it's not hard,” Reed told TigerNet last week. “We're in a society right now where people are looking for the good, which is great because you turn on the news every day and it's the bad news that sells. It's a pleasure to see that people are seeking out Clemson for the right reasons because it's telling you that there is some good in the world.”

Swinney said the coaches’ jobs are made easier because people seek out Clemson, and as a result, the Tigers’ national footprint continues to grow.

“It just happened. As our brand grew, people started calling us. We have the same footprint inside-out. Just kinda been our philosophy to be an inside-out program,” Swinney said. “But we’ll go anywhere for the right fit. For the right guy. We don’t spend a lot of resources. We’re not like, ‘Let’s all go recruit California.’ We don’t do that. Most of these guys who have come outside of our footprint - we’ve always reached out to top players and things like that - but the interest has been reciprocated more. It might be a GA that’s done the reaching. If there’s interest, we’ll go see a kid and more importantly, they’ll come to see us. If they’ll come to see us, then there’s interest from both sides.”

Reed says the paw is recognizable wherever he goes.

“It's good when you can go into a high school and kids recognize the paw and they're like, 'Man that's Clemson.' You've got kids running down the hall that are like, 'Hey coach, can I get a scholarship? I play football.' And the kid doesn't even play football,” Reed said. “That's a good feeling to be able to walk into a high school and have that type of aura when you walk in.”

Even young women want to play at Clemson.

“That's national when you go places and people recognize the paw. We're talking about young ladies that recognize it and they're like, 'I play football, too!' It's good,” Reed said. “Now you don't really have to sell the program. The program has already sold itself.”

Reed was at NC State before he arrived at Clemson, and State’s block “S” was easily mistaken for other schools.

“The other school that I used to coach, when I would go into schools, people thought it was Stanford because they couldn't see the 'N' or the 'C'. People were always like, 'Is that Stanford?' The things that we're doing here on and off the field is helping us out recruiting wise,” Reed said. “People are looking for some good. They're tired of seeing the bad. When you turn on the news, it's somebody dying, somebody getting shot, something happened politically at the White House.

“It's a breath of fresh air when someone is like, 'You know, I like what you guys are doing at Clemson.' It's not just what we're doing on the field. It's also what we're doing off the field as far as our development of our young men and our young athletes. It's refreshing to go to a school, and somebody says, 'Man, Clemson!' Half the time they're not even student-athletes, they're regular students. It feels good to walk in and get that respect.”