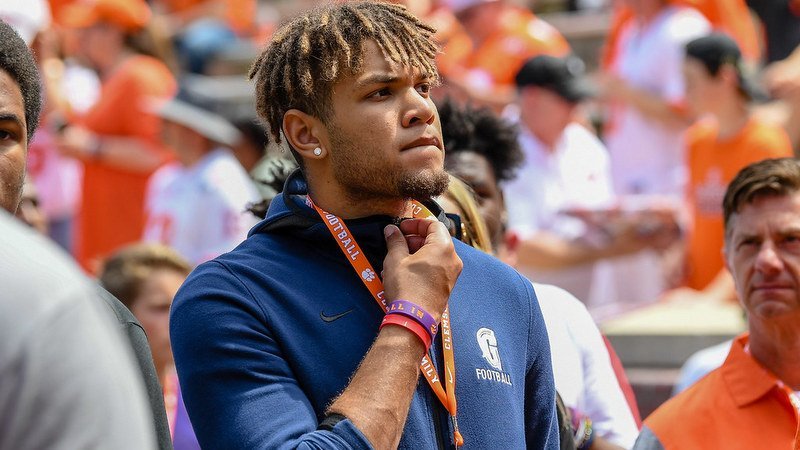 The attendance at Clemson’s spring game continues to resonate with recruits.

One of those recruits is 2020 tight end prospect Diego LaMonica (6-5 227) of Miami (FL) Gulliver Prep, who made the trip to Clemson’s campus for the second time in three weeks. LaMonica visited Clemson in late March with his father.

LaMonica said the 60,000 in attendance for what amounts to a glorified scrimmage caught his eye.

“It was amazing. There were something like sixty-thousand people out there for a spring game, which was crazy for me to see,” he said. “They (Clemson) said that they are interested in me, but since my film is short they just want to see me in a camp. I’m hearing from them pretty much every day. We got to go around the campus. I loved seeing that. And the facilities are incredible. And it was incredible to watch how they use their tight ends during the game."

LaMonica received an offer from South Carolina earlier this week.

“It meant a lot to me because my mom was a cheerleader there, so I have family ties there. It did mean a lot to me,” Lamonica said. “They said they like the way I’m a versatile tight end. I can play in the backfield, I can play on the line, and I can play unattached from the O-line.”

Lamonica missed three games of his junior season with an injury, and before that there wasn’t much football film on him because he was focused on basketball. Playing in a run-oriented offense last season, LaMonica said he had just six catches but four went for touchdowns. Still, he said Clemson tight ends coach Danny Pearman loves his potential for the Tigers' offense.

"They say they like how aggressive I am and how I attack the ball like at the highest point," he said. "They said I would be a tight end and they would be able to put me in the backfield, out wide and put me in at tight end and do a lot of things with me."

Early playing time is also a plus.

"They have said that the tight end position isn’t what it used to be there," he said. "If I go there and work and produce then there is a chance to play."

Lamonica said Oregon and Vanderbilt were the other two schools showing the strongest interest in him right now. He holds offers from West Virginia, Syracuse, Vanderbilt, UCF, Wake Forest, Oregon, Virginia, and others. He does not have a favorite and will not be signing or enrolling early.

That’s heady stuff for a player who was more interested in playing basketball in high school.

"It's incredible, it's crazy," LaMonica said. "I wasn't even going to play football in high school and now that I have this. It's insane. I thought I was going to be this big-time basketball player because that was my first love, but it wasn't going to be working out because I was a 6-5 center. So I was like, I might as well try this and see how it works."

Where does Clemson stand early in the process?

"Clemson is really up there. I still haven’t gotten an offer from them," LaMonica said. "Hopefully that will happen this summer. But they are definitely a top school."