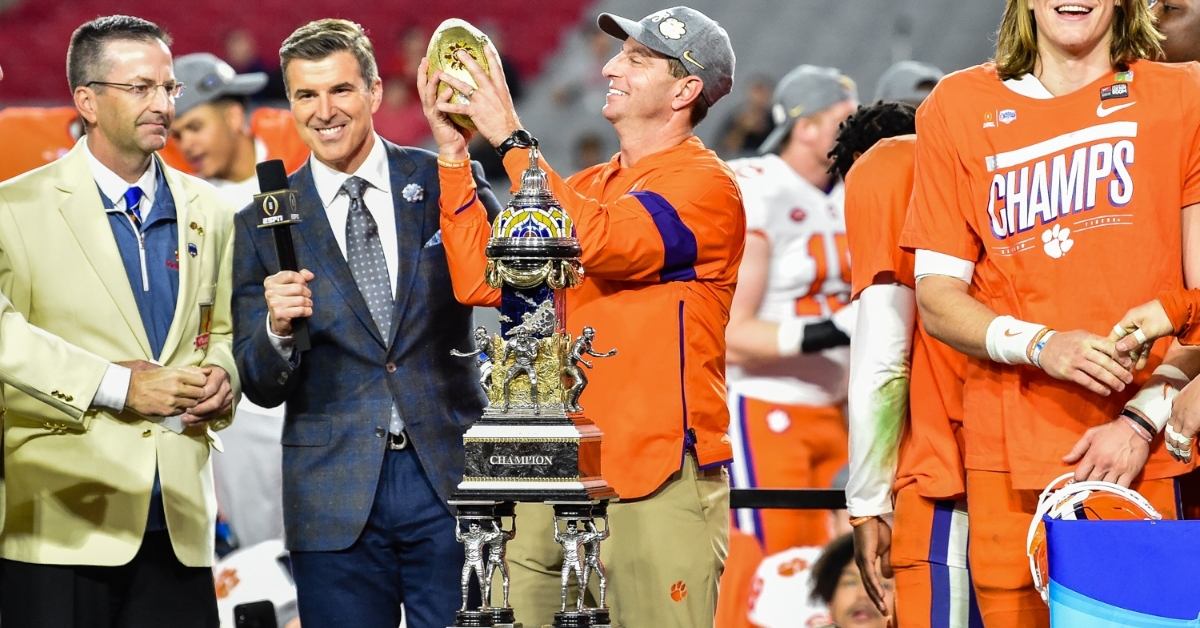 Clemson head coach Dabo Swinney loves his players and he loves his job. And for those that think Swinney is one of those coaches constantly looking for greener pastures, Swinney believes in blooming where you’re planted.

And he loves where he’s been planted.

Swinney has won two National Championships in the last three seasons and will play for a third next Monday when his Tigers take on LSU in the Superdome in New Orleans. Clemson has won five consecutive conference championships and the Tigers are appearing in the College Football Playoff a fifth consecutive year.

Yes, the Tigers recruit as well as anybody in the nation, but Clemson’s success happens more because of what happens off the field rather than on it. It’s all about relationships.

“We serve their heart, not their talent. Our program is about what's best for the players,” Swinney said this week. “Sometimes what's best for the players, the players don't like. There's an old saying that says rules without relationship leads to rebellion. We have relationships, and we have transparency and we communicate lots of trust and respect and communication. We've built a family atmosphere. It's very real and genuine it's not something you can fabricate.

It’s also about making sure each player takes advantage of their educational opportunities and making sure that everyone earns what they receive.

“It's about graduating our players and equipping them with the tools that they need to be successful on and off the field. It's about making sure they have a great experience and that they win, but it's in that order,” Swinney said. “The guys know we're consistent and we're fair and the best player plays period. You're not entitled. As you build a culture, don't base it on entitlement and don't base it on what guys did last year, base it on today. And it’s about having that windshield mentality of it's always about what's next. We learn and grow from what's in the rearview mirror but there's a reason why that may be very small. And that windshield is big. I start over every year.

“I tell Trevor (Lawrence), ‘Hey, you were great last year. Awesome. You're gonna have to earn the job again, right, because that's just the way it is.’ That's our culture and guys buy into that and it creates competition, and it stamps out complacency.”

Swinney wants to see change – from the inside out.

He then said he doesn’t want to build a program based on junior college players or transfers, he wants to do it through evaluation, recruiting and development.

“So many people, they compromise and they take shortcuts to have a great team. I don't sign JUCO players or transfers,” Swinney said. “My mindset is I want to develop through the draft. I don't want to be lazy in our evaluation. We're going to evaluate them and develop them.”

Swinney loves what he does, and he loves where he is – Clemson.

“I love what I do, I love where I am, and I love my players,” Swinney said. “I've got three sons, but I made all these guys my sons. I've been a player and I understand how hard it is. But my whole philosophy of coaching is I care more about the 30-year old version of them than I do the 18 to 22-year-old version of them. That's how I want to deal with it. I just try to lead with love and lead with wisdom. I'm tough on these guys, but I love them and they know that.”