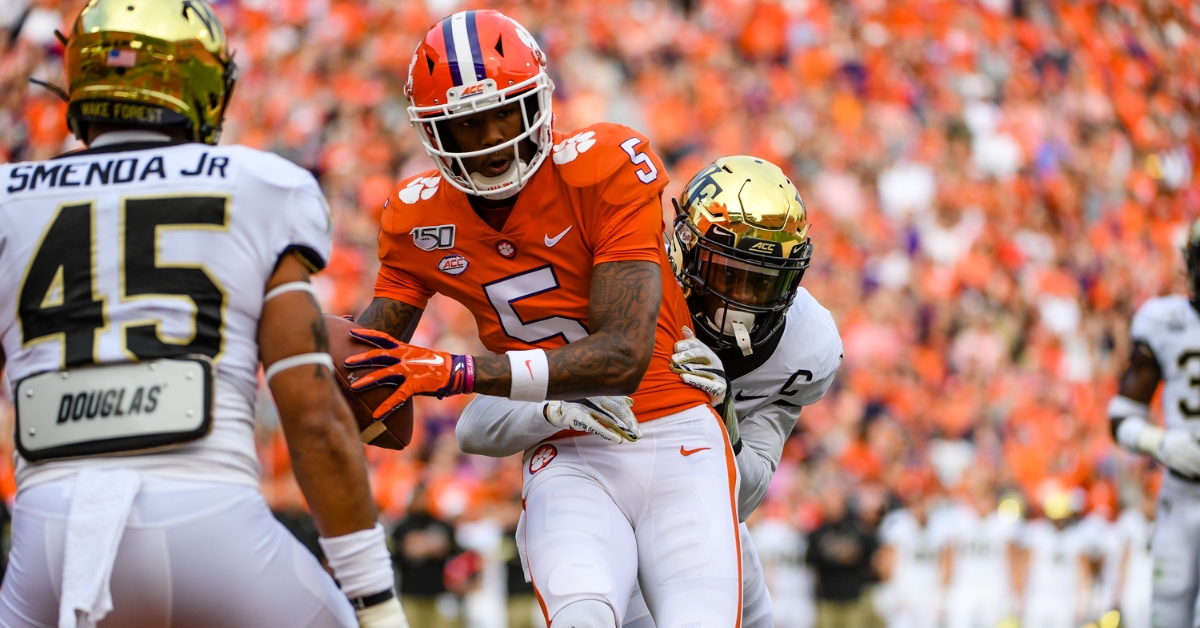 Higgins hauls in the reception against Wake Forest

CLEMSON – While Clemson players and coaches waited at the team hotel before Saturday’s home finale against Wake Forest, co-offensive coordinator Tony Elliott watched wide receiver Tee Higgins and noticed that the junior playmaker wasn’t his normal, playful self. And it worried Elliott enough that he approached Higgins to make sure everything was ok.

It was. Higgins was simply locked in.

Higgins atoned for an uncharacteristic drop against NC State a week earlier by catching four passes for 64 yards in the 52-3 victory over Wake Forest. Three of those catches went for touchdowns.

“Proud of Tee. He was really quiet around the hotel, especially today. I went up to him right before we got on the bus and I said, 'Are you okay? Is everything alright?' He said, 'Coach, I'm just locked in.' That's when I knew that he was going to come out and play well,” Elliott told TigerNet. “He's a guy that's had a lot of success but he understands for his team to accomplish what we want to accomplish and for him to accomplish what he's set out to do, that he has to have a certain level of focus and intensity. Today he had that.”

Higgins’ three touchdowns marked the eighth time in Clemson history a receiver has recorded three touchdowns in a game. Teammate Diondre Overton became the seventh to do it earlier this season against Boston College.

“After that third touchdown, me and Dre (Diondre Overton) talked about it and he was like, you're finally part of the club. We just had a laugh about it,” Higgins said. “I stayed after practice every day and caught balls on the jug machine. I ran the route I dropped at least five times every day after practice. That was a big emphasis for today's game.”

Higgins opened the scoring with a 14-yard touchdown catch from Trevor Lawrence less than four minutes into the game, then hauled in touchdown receptions of 14 and 30 yards in a span of 29 seconds near the end of the first half. His three touchdowns surpassed his career-high, set against The Citadel in 2017 and against Florida State and Pittsburgh in 2018.

Higgins is eligible for the NFL Draft and said he realizes it might have been his last game in Death Valley.

“Obviously, that thought went through my head but you never know. I just had to go out there and have tonight. (If it was my last game in Death Valley), I'll remember my three touchdowns,” he said. “That's big. I'm in the record books with Dre with three receiving touchdowns and it's a great feeling.

“I think that was the first time he dropped a ball all year (last week), so it was great to see him get an opportunity to make some big plays,” Scott said. “Not just a normal play, those were some really nice catches, having to really go attack the ball in coverage. He's been playing very, very well. The way our season has gone, we're running the ball really well. We've got a lot of guys out there and we haven't had to force the ball to him a whole lot this year. His time is coming especially as we start getting into this Championship Phase of our season. I thought it was great for him and Trevor to have a big day together.”