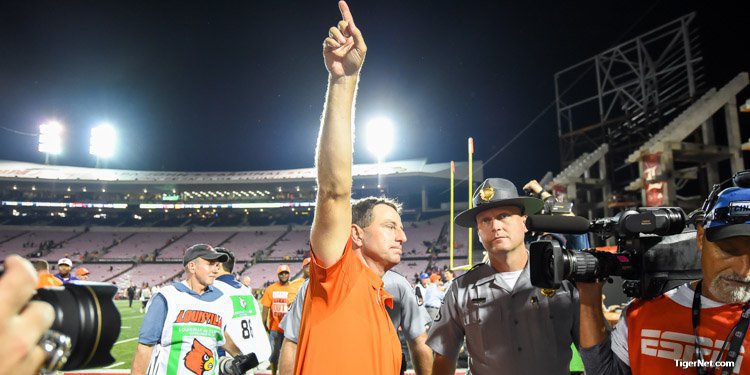 Clemson head coach Dabo Swinney made sure that every player and coach heard those three words as they prepared for last Saturday’s primetime clash against Louisville. The message was received as the Tigers defeated the Cardinals 47-21 in an early-season ACC Atlantic Division battle.

The first three games of the Clemson-Louisville were all close – 15 total points separated the two teams – and last season’s 42-36 win in Death Valley saw Louisville stop short of the yard marker on fourth down inside the Clemson 10. If the Cardinals had converted, they would have had a chance to walk out with a win.

However, Clemson committed five turnovers and made enough mistakes for three games, keeping the score closer than they would have liked, and Swinney’s message to his team resonated this week, and he mentioned it in his postgame comments.

“We had two goals tonight, one was to get the job done and the other was to leave no doubt. We felt like we left a little doubt in the past couple of years,” Swinney said. “Last year, against these guys, we turned it over five times. We came up here a couple years ago and gave up a kick return to the house. We just wanted to play good, sound, complementary football tonight and we did that in all three phases.”

Co-offensive coordinator Tony Elliott said the team wanted to play a complete game, and he understood exactly what Swinney wanted to accomplish.

“He was talking about last year’s game. It was closer than it needed to be,” Elliott said. “We had a lot of turnovers, turnovers in the red zone and we didn’t play great on offense the entire game and we left some doubt. So even though we won the game, we still felt like we didn’t have the respect we deserved coming out of that game, and rightfully so. When you turn the ball over and give Lamar (Jackson) 105 snaps. So we challenged the team to go out and play a complete game, complement each other and leave no doubt. If we’re the better team, then when we walk off the field let’s let everybody know that.”

Junior quarterback Kelly Bryant said the team realized they needed to eliminate the mistakes that have marked the first three games of the series.

“The past three years that we've played, there have been some close games. There has been a little doubt and people said the games could have gone either way,” Bryant said. “Last Saturday we wanted to leave no doubt. Just makes the plays that were there and have fun with it. For me, when I hear that, it's have fun, leave no regrets and make the most of your opportunity. There were some things we could have been better at, but it was a good showing.”

Right tackle Tremayne Anchrum said the complete effort shows what this program is capable of doing.

“The message to us was to be the best we could and to really exercise what we had been preaching all week and all year,” Anchrum said. “That we can be the best in this league if we reach our potential. Even though we didn't hit on all the numbers we wanted, we were all on the same page and hit on a lot of cylinders and showed our potential.”

For wide receiver Ray-Ray McCloud, the message had a deeper meaning.

“No regrets. You make a bad play, move on,” McCloud said. “I had a dropped ball and then made a catch on the next play. That’s been my mindset all along. Move on. You don’t always have the great end of the stick, and you put that behind you and move on.”

“Just exhaust the moment. Before the game, Coach Swinney brought up the so-called rivalry we’ve had with Louisville over the last three years,” Ferrell said. “Every game, leading up to this one, we felt like we left something on the table. We talked about the last three years and how we could have played better. And Coach Swinney said the media is always saying we were lucky or things could have been different. But I feel like going into this game we wanted to come out and show we were the better team. We weren’t going to let the hype surrounding us or the hype surrounding them keep us from executing the plan and showing we were the better team.”