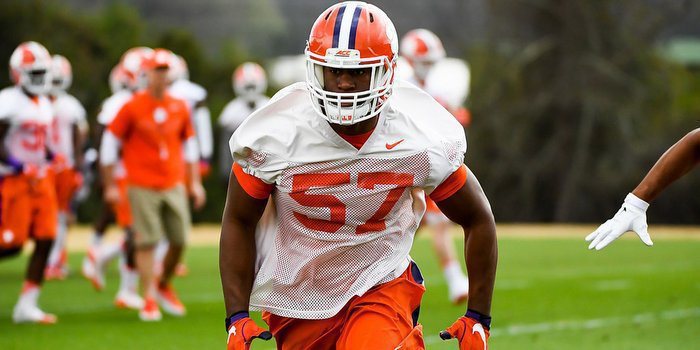 CLEMSON – Like a lot of freshmen, Tre Lamar had high hopes when he entered Clemson last season. He thought he could earn a decent amount of playing time, make a big play or two and solidify himself as one of Clemson’s main defensive playmakers.

After earning a total of 39 snaps in the first three games of the season, many wondered if Lamar would earn even more playing time as the season progressed. Instead, his playing time got stuck in neutral.

Take away the 21 snaps he played in the blowout win over Syracuse (giving him a total of 60 snaps over the first three games and Syracuse), and Lamar played just 42 snaps in the other 11 games, garnering 20 total tackles.

He played 12 snaps against woeful South Carolina in the regular season finale, but had just two more snaps in the final three games – one each against Virginia Tech and Ohio St. and none against Alabama (he did play on special teams).

Lamar is working almost exclusively at the MIKE (or middle) linebacker spot this spring, and with last year’s starting MIKE (Kendall Joseph) also earning reps at the WILL (or weakside) spot, Lamar is looking at the spring as a chance to show the coaches he belongs on the field and not on the sidelines.

"It felt really good after last season, and I really wanted to get out there and do something being given the chance, I had to take advantage of it,” Lamar said after Friday’s practice. “I’m mostly at MIKE right now.”

"I think I'm progressing well. Just knowing stuff, you know when I came freshman year it was just hard getting used to the new verbiage and stuff but now that I've been here a year I feel like I'm really starting to pick up on it,” he said. "I'm up to 241, really happy with it. It's what I came in with, but in terms of fat to muscle, I feel a lot better of where I'm at right now. I feel like I can move better too."

Lamar said the defense performed well in the scrimmage.

“I was pretty pleased with our performance,” he said. “There's always those couple of bad fits where someone gets loose, but overall I felt like we did pretty good."

The Roswell, Ga., native said he knew he needed to learn every facet of the defense if he wanted to impress defensive coordinator and linebackers coach Brent Venables.

"I'd say just overall knowledge (where he needed to improve), and knowing where I'm supposed to be,” he said. “Because it really helps with getting my reads and stuff, just knowing where to line up."

"We've got a lot coming back,” Lamar said. “I'm excited about what we're going to look like this year and someone's gotta step up and I'm going to give it a try and give it all I've got."