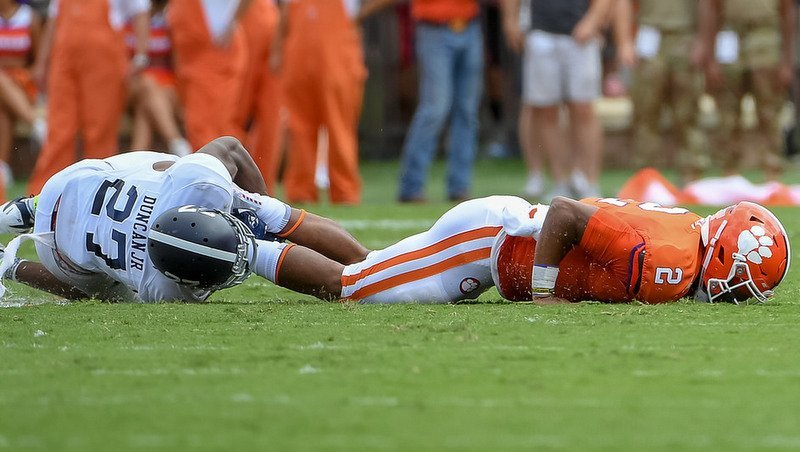 Kelly Bryant was injured on this play Saturday against Georgia Southern

“You scared me Saturday,” Bryant was told. Bryant laughed and said, “It scared me, too.”

Bryant exited Saturday’s win over Georgia Southern late in the second quarter after a run play saw him fall on the football. Bryant started to wander back to the huddle but was quickly replaced by freshman Trevor Lawrence. Bryant made his way to the locker room and didn’t return to play against the Eagles.

The injury was ruled a chest bruise, and Bryant told the media Tuesday that he’s ready to go Saturday.

“Feeling better, just took a shot to the chest, then landed on the ball,” Bryant said. “Weird play, just wanted to be safe than sorry. I’m recovered, back to one hundred percent. Oh, I’m full go, I’m ready to play today.”

Bryant said he could have played if needed.

“I feel like I could have, but at the same time we just didn’t want to risk anything,” he said. “It was a weird play, so we did all the tests to make sure everything was good.”

He then said he wasn’t sure at first what had happened.

“At first I thought I just had the wind knocked out of me, and then eventually realized something else was going on, so I went to the trainers and we figured everything out,” Bryant said.

Next up for Bryant and the Tigers is a Georgia Tech team that thrives on head coach Paul Johnson’s vaunted option attack. The Yellow Jackets have a new defensive coordinator in Nate Woody – formerly at Appalachian St. – but Bryant said it’s the same difficult task the Tigers have to face each week.

He also said the Tigers have to play better offensively.

“It’s a lot of the same schemes as last week,” Bryant said. “Similar defensive coordinators, tough environment, Clemson Georgia Tech is a big rivalry game, we’re going to get their best. We could play better, especially offensively. We need to put together four good quarters of football. The effort has been great, but technically we haven’t been as sharp as we should be.”

The Yellow Jacket option attack controls the clock and limits offensive possessions for opponents, but Bryant says the Tigers have to take advantage of their opportunities and not make mistakes by trying to do too much.

“Definitely, if they get it going you could be on the sideline for a while and lose your rhythm,” Bryant said. “But we have to try not to press and make mistakes, just make the most of our opportunities, and capitalize.”