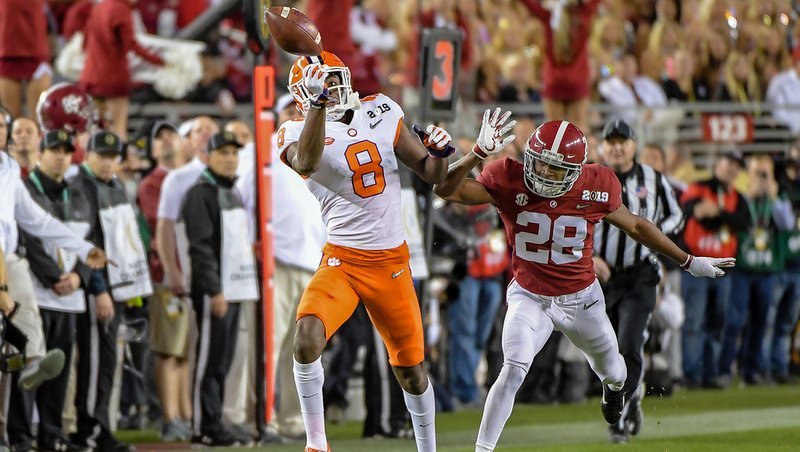 Ross made acrobatic catches against Alabama.

Clemson wide receiver Justyn Ross is well on the road to recovery, and his high school coach said he believes Ross will not only play football again -- he will be better and stronger than ever.

Ross had surgery last week to repair a congenital fusion (two fused vertebrae appear structurally and functionally as one). The rising junior will miss the 2020 football season as he recovers from the surgery, and there is no guarantee that he will play football again.

His former head coach at Phenix City (AL) Central, Jamey DuBose, said he spoke with Ross over the weekend.

“Justyn FaceTimed me Saturday evening, I believe it was, me and my wife, and gave us an update. We've tried to give him his space and his room, him and his mom, and just kind of get through this,” DuBose said. “And I've always been there for him to lean on and support him in whatever he does. And he's a great person and it was great to see him and hear him. He was in good spirits. He was still at the hospital when I talked to him and I think his mom had actually went out to get him some dinner or something.

“But he was doing fine, said he would be coming back home on Sunday. And then just resting and get things well. But he was moving his neck, he was moving around, and everything seemed to be fine. He was joking around and I'm sure that they had him with the right kind of painkillers that he needed or whatever, but he was in good spirits and we had a great talk.”

DuBose said he was surprised by the news of the surgery, but Ross did complain about soreness in high school.

“It's something in high school, he never really had a problem with. Me and my wife talked about it and Justyn used to mention some back pains or neck pains and we, not knowing anything, we just moved on, it wasn't a hit or anything,” DuBose said. “It was just some normal soreness or ailments that he would mention every now and then, but nothing that was really of any drama or any problems. He got hit a lot of times and in high school going across the middle and different ways with his body, but never had an issue or problem. So it was just one of those things nobody knew about. And luckily, we found out about it now and luckily there's been something done about it and hopefully, things will progress from there.”

DuBose then said he expects Ross to do everything he can to play football.

“Well, the thing about it is the surgery seemed to be a success, but I think it's all in God's hands and what God can do with him in the healing process. I will say this, it's up to Justyn Ross,” DuBose said. “In the ability to work and overcome things, Justyn Ross will be back. He'll be back quicker and stronger than anybody. I know Justyn as well as anybody. And I've seen him have injuries. I know when he injured his knee in high school, I would talk to the doctors that did the surgery.

“And this is just a setback, man. And that's what we talk about in our life all the time, is setbacks and challenges. And this is just one of those. Now what he's going to do in the future, I don't know. That's up to him and his mom. But I do expect Justyn to play ball again. And I expect him to be back probably even bigger, stronger, faster than what he was. And that's what he did after his knee injury.”