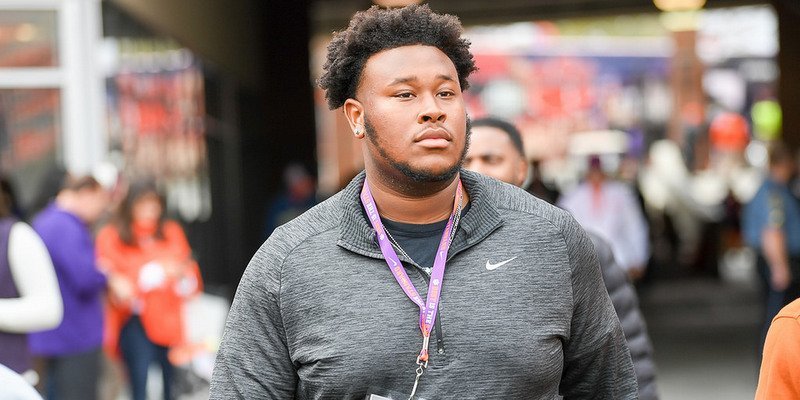 McFadden walks the sidelines before Clemson's home finale against The Citadel

Jordan McFadden has a lot to think about this week, and a decision on his school of choice could come sooner rather than later.

The 2018 3-star OT out of Roebuck (SC) Dorman committed to Virginia Tech back in July, but an August Clemson offer prompted several visits to the Tigers’ campus this fall. McFadden was on hand to see the Tigers defeat Auburn and Boston College in September and was on hand for last Saturday’s 61-3 victory over The Citadel.

The visit was a good one.

“I had a great time. It was a great visit,” McFadden told TigerNet. “It was good to get back on campus and talk to some of the commits and players and coaches.”

“We got to talk a little bit,” McFadden said. “We were talking about what it would be like to play with each other. It really gave me something to think about.”

Duke, N.C. State, Georgia Tech, Michigan St., Virginia and Wake Forest have all offered, but McFadden pulled the trigger on the Hokies over the Fourth of July. The Clemson offer, however, was the one he was waiting on and after this past weekend’s visit, he knows he faces a hard decision.

“It gave me a lot to think about,” McFadden said. “Clemson is the school I really wanted to go, even without football, so they were the school I was looking at from the beginning. And then you get there and you talk to the coaches and the players, and you realize they have a lot going for them right now.”

Following the game, McFadden made the trek over the head coach Dabo Swinney’s new house.

“We were the first group that got to see it,” he said. “We were all walking around and looking at everything, and Coach Swinney was telling everybody about the culture at Clemson. It was good to see that side of things. Coach (Robbie) Caldwell told me that I should be ready to come in and play early and I’d have a good chance of playing as a freshman. He likes the way I play. And Coach Swinney was just saying that he knows that I like Clemson and he’s just sitting back waiting for me to make this decision. He said I’m a good player in high school so be ready to play early.”

So where does Clemson stand?

“I’d say Clemson (is the leader) right now,” McFadden said. “Me being an in state kid and having a great time this weekend, and just understanding how much I could grow as a person at Clemson. The visit definitely swayed me over to liking Clemson a little bit more. I am going to take some time this week and talk to my mom about it, and then I’ll make a decision.”